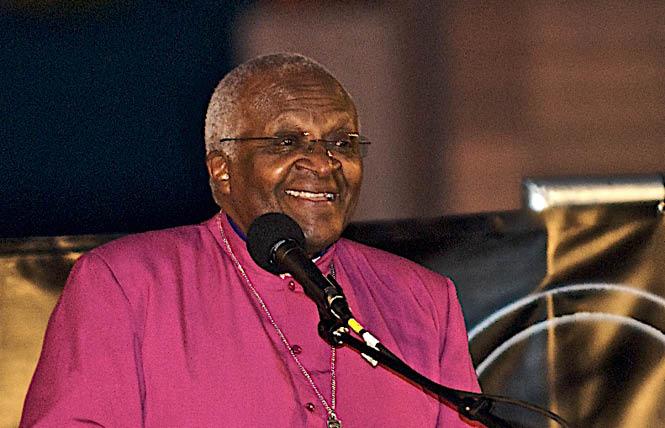 The cause of death was cancer, according to the New York Times.

"Desmond Tutu was a patriot without equal; a leader of principle and pragmatism who gave meaning to the biblical insight," Ramaphosa said. "A man of extraordinary intellect, integrity and invincibility against the forces of apartheid, he was also tender and vulnerable in his compassion for those who had suffered oppression, injustice and violence under apartheid, and oppressed and downtrodden people around the world."

The leader of the South African Council of Churches and a ranking prelate in the Anglican Church, Archbishop Tutu was considered "South Africa's conscience." Cape Town's first Black archbishop, he was known for being forthright and outspoken with his views fighting against apartheid and for the rights of people, including universal voting rights and full equality for women and LGBTQ people.

Joni Madison, the interim president and former chief of staff/chief operating officer of the Human Rights Campaign, a main LGBTQ rights organization in the U.S., praised Archbishop Tutu in a tweet, writing the world had lost "a great champion of justice, whose powerful allyship to our community will never be forgotten. We are forever grateful."

The National Black Justice Coalition, a Washington, D.C. nonprofit that fights to empower Black LGBTQ and same gender loving people, also mourned the passing of Archbishop Tutu, writing in a Twitter tribute that he "was an international human rights activist who used his voice to speak out against injustice. He will be dearly missed but never forgotten by all of the lives he has touched."

The first Black Bishop of Johannesburg & Archbishop Capetown, Desmond Tutu, was an international human rights activist who used his voice to speak out against injustice.

He will be dearly missed but never forgotten by all of the lives he has touched.#RestInPower pic.twitter.com/gxU2LJVkCK— NBJC (@NBJContheMove) December 27, 2021

Archbishop Tutu co-authored "Made of Goodness" and "The Book of Forgiving" with his lesbian daughter, Mpho Tutu van Furth, who presided over her parents' renewal of their vows in 2015 after 60 years of marriage.

Tutu van Furth is the executive director of both the Tutu Institute for Prayer and Pilgrimage and the Desmond and Leah Tutu Legacy Foundation.

Tutu van Furth was stripped of her position as a priest in the Anglican communion after she married her girlfriend, Marceline van Furth, in a small private ceremony in the Netherlands in 2016.

She expressed the hurt and sadness she felt by the church's actions in an interview with the BBC.

"It was incredibly sad for me. A few years ago, I celebrated the Eucharist with my father ... and now to be in a position that I cannot serve at the altar with him ... I was surprised by how much it hurt," she said in the interview.

In 2008, Archbishop Tutu expressed regret over the Anglican Church's battles over LGBTQ issues during an award ceremony hosted by the International Gay and Lesbian Human Rights Commission, now known as OutRight Action International. IGLHRC was honoring Archbishop Tutu with the Outspoken Award for his human rights work, especially speaking out for LGBTQ rights. During his speech, he criticized the church's choice to focus on sexuality when, in his mind, there were more pressing issues to tend to. He asked the LGBTQ community for forgiveness and praised the community for its love and compassion.

It was believed to be the first time that Archbishop Tutu spoke before a predominantly queer audience addressing LGBTQ rights, the Bay Area Reporter reported at the time.

"How sad that our church should at the present time be so obsessed with this issue of sexuality when people all over face ... disease, corruption, and conflict," Archbishop Tutu said at the time.

"I ask for your forgiveness for the way in which we, the institutional church, have treated you, ostracized you, made you feel as if God has made a mistake creating you as who you are," he said. "You are such wonderful human beings. You are frequently hounded, vilified, molested, and even killed as targets of homophobia. Yet most of you still manage to remain compassionate human beings ... refusing to be embittered. Thank you for being such wonderful human beings, and for your part in trying to help make our world a better place."

Archbishop Tutu continued to speak out, participating in the United Nations' "Free and Equal Campaign."

He stated in the global body's campaign against homophobia and transphobia video, "I cannot keep quiet when people are penalized for something about which they can do nothing. But more perniciously, more ghastly, is the fact that people are penalized, killed, all sorts of ghastly things happen to them, simply, solely on the basis of their sexual orientation.

"I oppose such injustice with the same passion that I opposed apartheid," he said.

Reacting to the news of Archbishop Tutu's passing, UNAIDS stated it was "deeply saddened" to lose a leader who not only "fought against apartheid in South Africa and combated racism and injustice worldwide," but also "was a powerful voice in the fight against AIDS, combating denial, demanding access to treatment for all, calling out against discrimination of people living with HIV, and championing the human rights of lesbian, gay, bisexual and transgender people, women, and children."

"A giant has fallen. Archbishop Tutu was a freedom fighter, a holy man, a great hero who played a history-shaping role in the liberation of Africa," said Ugandan Winnie Byanyima, UNAIDS executive director. "He was a leading light who brought global attention to injustice in a way few others could and a champion for the rights of all people living with and affected by AIDS. Millions are alive and free today because of the path he charted and the hope he brought to this world."


Many honors
Archbishop Tutu was honored with many awards and acclaim during his long career. He received the Nobel Peace Prize in 1984 for continuing the battle against apartheid in his native South Africa while his colleague Nelson Mandela continued the fight from behind bars in prison. In 2009, then-President Barack Obama awarded him the Presidential Medal of Freedom, the nation's highest civilian honor.

Apartheid ended in 1993 after three years of negotiations and unilateral steps by then-South African President Frederik Willem de Klerk, who died November 11. The negotiations led to South Africa's first non-racial election that ushered the African National Congress into power. Mandela, who had been imprisoned for nearly 30 years, became the country's first post-apartheid president in 1994.

Archbishop Tutu never let up the pressure on political leaders. He was critical of both apartheid and ANC leadership.

Global leaders praised Archbishop Tutu for his human rights leadership upon the news of his passing.

"Archbishop Tutu was a towering global figure for peace and an inspiration to generations across the world. During the darkest days of apartheid, he was a shining beacon for social justice, freedom, and non-violent resistance," said U.N. Secretary-General Antonio Guterres in a statement December 26, noting Archbishop Tutu's ongoing fight against poverty, climate change, human rights, and HIV/AIDS. "His great wisdom and experience were always communicated with humanity, humor and heart."

Guterres continued, "Although Archbishop Tutu's passing leaves a huge void on the global stage, and in our hearts, we will be forever inspired by his example to continue the fight for a better world for all."

President Joe Biden and first lady Jill Biden expressed they were "heartbroken" to learn of the news of Archbishop Tutu's passing and called him a "true servant of God and of the people."

They sent condolences to his family and to South Africans, "who are mourning the loss of one of their most important founding fathers" in a statement from the White House Sunday.

In addition to his daughter van Furth, Archbishop Tutu is survived by his wife, Nomalizo Leah Tutu; a son, Trevor Thamsanqa Tutu; and two other daughters, Theresa Thandeka Tutu and Naomi Nontombi Tutu, as well as seven grandchildren. 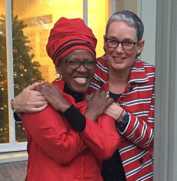 IGLHRC to present Tutu with human rights award
Sign up!