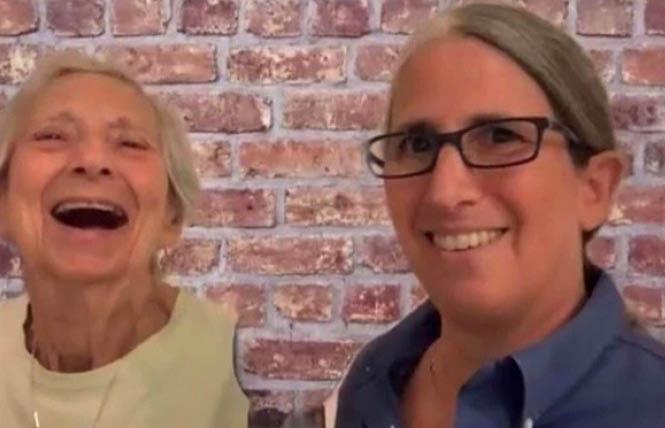 As we enter our 22nd month under COVID-19's cloud — with a new variant upon us — it's clear we'll have another holiday season unlike those of yesteryear. Many of us are vaccinated and eager to venture out, while others are still wary. Luckily, there's a variety of in-person, online, and hybrid events to choose from.

Out in the Bay this week brings you an audio sampling of performers who can brighten your spirits, and our guests, Lisa Geduldig and Bay Area Reporter arts and Nightlife editor Jim Provenzano, suggest events offering much-needed laughter, peace, or both.

Lesbian comic Geduldig, host and creator of "Kung Pao Kosher Comedy," now in its 29th year, starts us off with bits from her show and tells us how her mother, Arline, became a comedy star at age 89 on Geduldig's "Lockdown Comedy," a pandemic silver lining.

"Favorite time of year for us Jews, isn't it? Christmas? I just love it," she joked in a "Kung Pao Kosher Comedy" opener a few years ago, a couple minutes of which are included on this week's Out in the Bay. "I just can't get enough of the music. ... Can you imagine if we played our songs in the stores this time of year? Everybody'd be like 'Oh sh-t, they only have one song!?'"

Fearing the pandemic would ruin her career, she quickly learned Zoom and launched her monthly "Lockdown Comedy" in July 2020. The first show was while visiting her then 89-year-old mother, Arline. On a lark, she asked her mom if she'd like appear.

"I didn't realize how funny she is, or how fearless," said Geduldig. Her mom said yes and is now a regular crowd-pleaser on "Lockdown" and "Kung Pao," "talking about having the hots for young firemen she sees in the supermarket and other things I never expected to come out of her mouth."

Ophira Eisenberg, nine-year host of NPR's "Ask Me Another" and a regular on Hulu's "Up Early Tonight," and "fabulous lesbian comedian Jessica Kirson," Geduldig said, join the mother-daughter duo on this year's online-only "Kung Pao," December 24-26.

Provenzano previews live and online events on Out in the Bay — some with audio clips — and spills pet peeves. He loves the Alamo Drafthouse movie theater, for example, not just for the "delicious pizza" and comfy couches, but also because "they'll throw people out if they use their cellphones!"

Jinkx Monsoon and BenDeLaCreme, who perform their popular "Jinkx & Dela Holiday Show" December 19 at the Palace of Fine Arts, are based in "Dragland," Provenzano quipped. "I don't know where all these queens come from. They're constantly flying around the universe. I don't know if they have homes!" But he declares "they're hilarious, both of them."

Provenzano also describes the growing variety of LGBTQ online and cable offerings and suggests books that could make great gifts for friends or yourself this winter.

Hear a half-dozen performance clips and more from Geduldig and Provenzano on this week's Out in the Bay. The program airs at 5 p.m. Friday, December 3, on KALW, 91.7 FM SF Bay Area-wide; and at 9:30 a.m. Saturday, December 4, on KSFP, 102.5 FM San Francisco only. It is available anytime on Out in the Bay's website.

Holiday movies with a queer twist