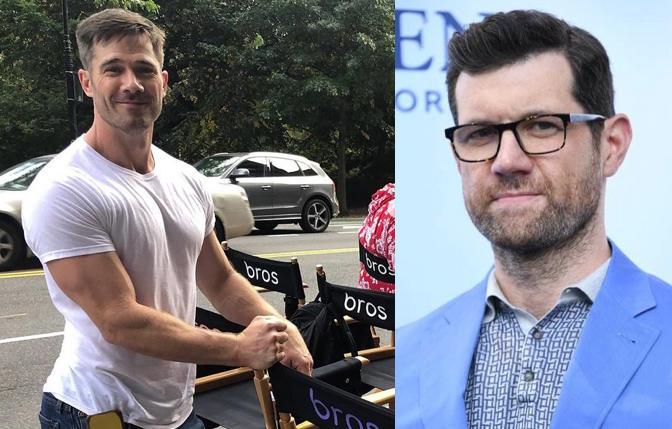 Luke MacFarlane on the set of 'Bros'; Billy Eichner

Soon after gay Twitter calmed down about the Billy Eichner feature film project Bros, which will feature an all-LGBT cast, costar Luke MacFarlane posted a few tight T-shirt thirst trap photos on his Instagram account on the set as the film began shooting in New York City.

"Billy Eichner said I have to post more or he'll have me fired," joked MacFarlane in a comment.

Eichner replied, "It's about time. This isn't a game. Luke."

Bros' storyline is about two gay men with commitment problems who attempt to form a relationship. Eichner cowrote the script with Nicholas Stoller, who directs.

On Sept. 23, Eichner tweeted a link to the Hollywood Reporter article, writing, "This is the best thing EVER! I could not possibly be more excited to tell you the ENTIRE main cast for my rom com BROS will be ALL openly LGBTQ+ actors!!! Yes, even in all the straight roles! This is a first for a major studio film. LET'S MAKE HISTORY!!!"

The announcement of the film project made headlines on entertainment and gossip websites. Eichner announced that the casting for this gay-themed romantic comedy would be diverse, with LGBT actors and production members as well; and a few straight people, of course.

Eichner is known for his abrasive comedic talents in Billy on the Street and Parks and Recreation, as well as numerous voiceover gigs and a recent role in American Horror Story.

Bros will be released in August 2022.