Eyes of Tammy Faye: dramatic adaptation of the televangelist documentary 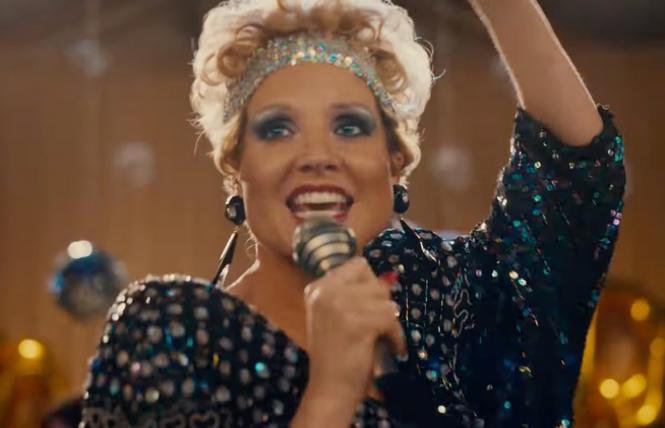 Jessica Chastain in 'The Eyes of Tammy Faye'

It's hard to believe that the late Tammy Faye Bakker would be 79 years old were she alive today. It seems like it was such a short time ago that she and her husband Jim Bakker were making headlines when their televangelist empire collapsed amid a variety of financial and sexual scandals.

But Tammy Faye emerged unscathed. In 2000, she was the subject of a feature-length /documentary titled The Eyes of Tammy Faye, which was produced by gay filmmakers Fenton Bailey and Randy Barbato. That film has now been adapted into a scripted biographical drama of the same name. Jessica Chastain, who serves as a producer of the new film, stars as Tammy Faye, with Andrew Garfield co-starring as Jim Bakker.

The film, directed by Michael Showalter and written by Abe Sylvia, paints a loving portrait of Tammy Faye. She is presented as a woman who honestly believes in what she preaches, a woman who loves her husband and wants to bring the love of God to the masses. The film follows her life as she first meets Jim in bible college. The couple falls instantly in love and soon take to the road, performing for children as they share bible stories in sketches which include comic puppets. 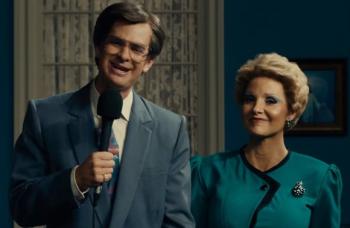 They quickly catch the eye of televangelist Pat Robertson (Gabriel Olds) and bring their puppet show to his fledgling TV network. After a few years, the Bakkers move on and launch their own network, whose flagship show, The PTL Club (Praise The Lord), stars themselves. They become celebrities. Jim shamelessly asks for donations on the air, and the money starts rolling in. The Bakkers are soon living in a mansion.

But as the film recounts, Tammy Faye wasn't your average Christian. She embraces the LGBTQ community, and even interviews a gay man with AIDS on the PTL Club. Fellow televangelist Jerry Falwell (Vincent D'Onofrio), who is perhaps the most powerful man in the evangelical Christian community, is horrified. But Tammy Faye stands her ground.

The film follows the fall of the PTL Club, as Jim is accused of misusing ministry funds, which leads to his imprisonment. He is also accused of sexual misconduct by church secretary Jessica Hahn. There are hints that Jim may be struggling with homosexuality. Falwell turns on the Bakkers, and the PTL Club is ruined. Now divorced from Bakker, Tammy Faye is left to start over.

Chastain is wonderful as Tammy Faye. She captures the innate goodness, and the naiveté of the late icon, and even looks like her. It's hard not to like Tammy Faye when she urges her TV viewers to show compassion for people with AIDS. It's hard not to feel for her when, in the aftermath of the wreckage of the PTL club, she tries to launch a mainstream show business career and is rejected by a TV executive. 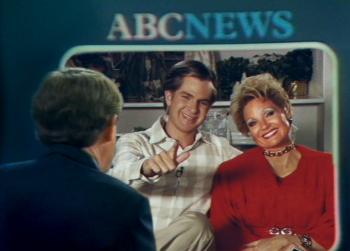 Andrew Garfield and Jessica Chastain in 'The Eyes of Tammy Faye'

The film does not mention Jim J and Tammy Faye, a talk show the real Tammy Faye co-hosted with gay HIV positive actor Jim J. Bullock. Nor does the film mention her second marriage to building contractor Roe Messner, though Messner is included in the film as a minor character.

Garfield is quite good as Jim Bakker. He plays the character as a man who is at first sincere in his desire to bring the word of the gospel to the masses, until he becomes a victim of his own excesses.

Vincent D'Onofrio is equally good as the treacherous, anti-gay Falwell. Falwell was an enemy of the gay community during his lifetime. The film does not whitewash this and presents him as the hateful sleaze that he was.

Lesbian actress Cherry Jones, who can always be counted upon to give powerful performances, unfortunately isn't given much to do as Tammy Faye's long-suffering mother. A winner of several Tony Awards, Jones has a strong presence onstage and onscreen. It would have been nice to see her character developed further.

The Eyes of Tammy Faye is an entertaining film. It pays tribute to a decent woman who wanted to do good even as she was surrounded by people who did not have her best interests at heart. The film brings to life the decades in which Tammy Faye lived, from her childhood in the early 1950s, to her first meeting with Bakker ten years later, through the PTL years and beyond. It's a story that seems almost hard to believe, yet it's all true. 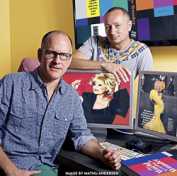