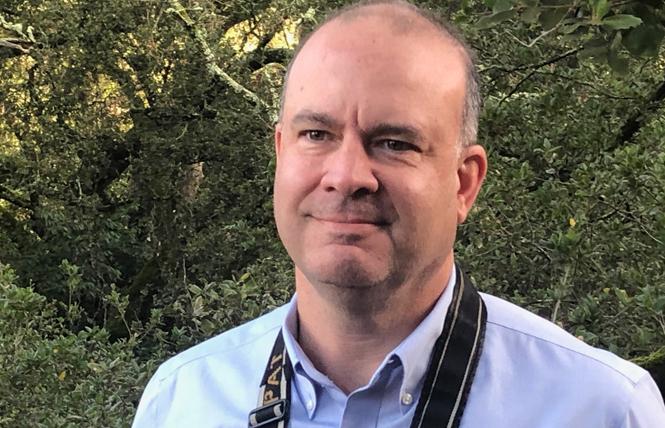 The Golden Gate Audubon Society has hired its first openly gay executive director in the organization's 105-year history. Glenn Phillips, who grew up in the East Bay, returned to the area after about 30 years in New York, where he was the executive director of New York City Audubon for seven years.

According to a news release from the society, Phillips, 52, grew the membership of New York City Audubon by 50% during his tenure there and increased revenue from $650,000 to $1 million. GGAS currently has almost 7,000 members, and Phillips said in a phone interview that he hopes to at least double that in the next four years, as well as strengthen the relationships between the Golden Gate chapter and the seven other Bay Area Audubon chapters. GGAS covers San Francisco and parts of the East Bay, including some of Alameda and Contra Costa counties.

He added that he wants to increase the diversity of the organization's membership, not just the sheer numbers. The birding community became part of the national conversation on race and policing last May, when Amy Cooper, a white woman, called the police on gay Black birder Christian Cooper (no relation) when he asked her to put her dog on a leash in New York City's Central Park. Amy Cooper ultimately apologized to Christian Cooper and New York prosecutors dismissed their criminal case against her.

"All the bird community's leaders need to be tuned into the fact that not everybody moves through the world with the same privilege that I do and that others like me do," Phillips said. "Just as we would fight to the end to preserve the diversity of our bird population, we need to stand up for human diversity in the same way."

Although there is more work to do on inclusivity, the Bay Area birding community is generally welcoming and LGBTQ-friendly, according to queer birder and GGAS member Rachel Silverstein. She acknowledged that birding events "skew very heavily white," but said the Central Park incident sparked a meaningful discussion among GGAS members, who were "very interested in how we can be there for other people of color who might experience things like that, and how we can learn more about racism."

Phillips succeeds Pam Young, who served as interim executive director since mid-2019.
"We are fortunate to have someone as experienced as Glenn assuming the role of our new executive director," stated Eric Schroeder, president of the GGAS board of directors. "Glenn's leadership and vision will help guide us towards our goal of creating North America's most bird-friendly urban community.' "

Conservation and bird protection
Phillips emphasized the importance of small environmental actions that people can take to help birds, such as conserving water and energy, keeping cats indoors, and planting native plants. However, he noted that not everyone has the ability to make those choices in their community, and that the benefits of those options aren't evenly distributed either. He added that it's important for people to engage with elected officials to ensure that "the benefits of moving towards a more carbon-neutral economy are uniformly felt and not reserved for only the wealthy."

One topic that has been discussed is the SkyStar Observation Wheel in Golden Gate Park. The 150-foot Ferris wheel may be hazardous to migrating birds, as Golden Gate Park is a "staging ground" for birds on their way to Canada and Alaska, Phillips explained.

The wheel was installed last year for the 150th anniversary of the park, and was originally scheduled to shut down this month. Due to COVID-19, it only operated for 39 days last fall, before reopening again March 4. On Tuesday, the Board of Supervisors voted to allow the wheel to remain for four years. An effort by Supervisors Connie Chan and Aaron Peskin to limit it to one year failed to get the eight votes necessary.

In an interview before the March 16 vote, Phillips said that the four-year plan warranted additional study and monitoring to mitigate the effects on migrating birds.

In New York City, two bright lights shine up into the night sky each year on September 11 to commemorate the anniversary of the 2001 attacks. A team of volunteers and scientists gathers nearby to watch for birds that are drawn to the beams. When too many of them gather, the lights are turned off for 20 minutes to let them get back on track.

Another annual "community science" event GGAS members look forward to is the annual Christmas Bird Count. As the GGAS website explains, "From before dawn until dusk, they trek through parks, neighborhoods, and wetlands, venture out in boats on the bay, and skirt reservoirs and bayside mudflats to identify the species and count the numbers of birds at every site."

The numbers that volunteers report — not just from GGAS but from birders around the world — have been used by scientists for over 100 years to track changes in bird populations, which Phillips said makes it the longest-running citizen science project in existence. "Bird populations have declined really dramatically since the 1970s, and part of the reason we know that is because of these Christmas Bird Counts," Phillips said.

The 2020 count was significantly scaled back due to COVID-19, but there will be a Christmas in May Bird Count that birders can participate in May 8. Masks and other precautions will still be required.

The Golden Gate chapter has an annual budget of about $700,000, which funds education programs for fourth and fifth graders and adult education, among other things. Phillips declined to disclose his salary as the executive director, but tax records show that a previous executive director earned almost $100,000 in recent years.

For more information, go to https://goldengateaudubon.org/