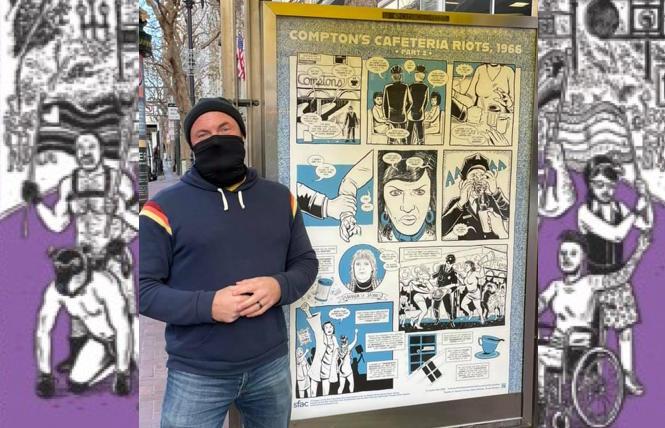 Artist Justin Hall with one of his Market Street bus posters.

Lesbian activists Phyllis Lyon and Del Martin's work in creating The Daughters of Bilitis are included, as well as multi-panel illustrations of pioneer José Sarria. Another poster shares leather history and the Tool Box Bar, which, when featured in Life magazine in 1964, lured many gay men to San Francisco. Each of the six posters are monochromatic-colored in reference to Gilbert Baker's original rainbow flag's colors.

"This project will illustrate how Stonewall and Pride were not the beginning of LGBTQ history, but rather rose out of a rich legacy of queer culture and resistance that was particularly profound in San Francisco," said Hall. "I wanted to put Pride in a broader context, and display that history in a way that is accessible and engaging." 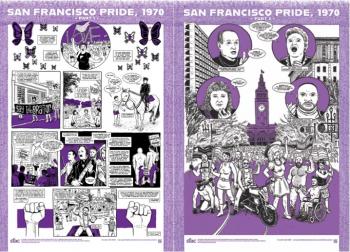 One of Justin Hall's bus poster illustrations in his series, 'Marching Toward Pride.'

"Justin Hall's series amplifies six important moments in San Francisco's LGBTQ history, and with the medium of comics, makes these histories compelling and relatable," said Acting Director of Cultural Affairs Denise Bradley-Tyson. "While these stories are just a few among countless other significant moments, Hall's work celebrates the decades of struggle, resistance, strength and triumph in the City's LGBTQ community.

Hall further shared his inspiration, process, and future goals for the project.

Can you share a bit about your research and how you decided which images to use for inspiration?
I knew I wanted to illustrate six moments in SF LGBTQ history leading up to and including the first SF Pride, in order to correlate to the six colors of the rainbow flag. Also, there are 36 bus stops along Market Street, so it made sense to have six different posters that could be replicated six times. 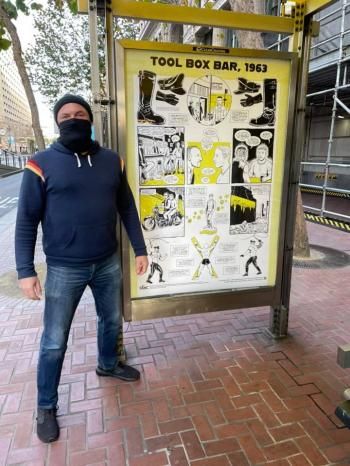 Justin Hall at The Tool Box poster of his SFAC project.

Picking those six wasn't too difficult after I figured out the first moment should be the 1955 founding of the Daughters of Bilitis, the world's first lesbian civil rights organization, and the last moment should be the initial Pride march itself in 1970. Of course, there were many events to choose from during such a rich time in our history, but when balancing all of the considerations of historical importance, diversity, and narrative impact, these decisions fell into place fairly easily.

During normal times, I would have gone in person to the GLBT Historical Society and the James C. Hormel LGBTQIA Center at the SF Public Library and combed through their archives. Because of the pandemic, however, I was mostly relegated to online materials. Luckily, there is a wealth of material, from articles and timelines, to documentary films and downloadable books, to photos to use as drawing references.

I also had excellent help from Isaac Fellman of the GLBT Historical Society, as well as from the historians Susan Stryker and Gayle Rubin, community activists and artists such as Seth Eisen, Katie Gilmartin, and JEB, and the eyewitness accounts of Tamara Ching and Mike Caffee. I've been living in San Francisco for 25 years now, so I luckily have a network of folks I could turn to for help.

I give a more thorough accounting of each of my posters, along with "backstage" thoughts, contextual information, and further readings, at www.justinhallawesomecomics.com/pride-posters. I'm planning on expanding this project out into a full graphic novel if possible, and of course that will require even more research.

How was your drawing process different from your other comic work (by hand/digital)?
Since I knew this material would be printed so large, I decided to work much bigger than I would normally for printed comics. Traditionally, comic book artists work one third larger than the size the work is printed at. This allows for some tightening of the art without losing details. But that was impossible with this project, so I just drew as big as was feasible. This meant a lot more time at the drawing table, but it enabled me to focus on a lot of details.

Then, I collaged the panels together in Clip Studio Paint, a comics-oriented visual program similar to Photoshop. I colored them and lettered them there as well, and then handed everything over to my designer, Sonia Harris. She added the border and titles and made sure everything fit together.

What's it like to have your artwork in such a public venue?
Absolutely wonderful! I'm used to my stories being read by fairly insular communities of queer comics geeks. To know that my work can have a reach well beyond that is thrilling. I really hope my deep dive into the fascinating history of pre-Stonewall LGBTQ San Francisco will provide some entertainment for anyone waiting for a bus or walking along Market Street. I want people in this city to understand and appreciate our history, and to honor the fierce and fabulous pioneers who made our freedoms possible. To my mind, comics are the most engaging way to do that.

Take a walk down Market Street for a trove of pre-Pride history, through February. 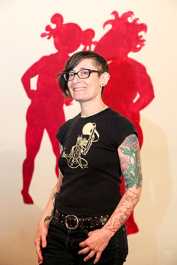 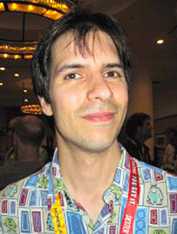 Queer comic fans can geek out at expo