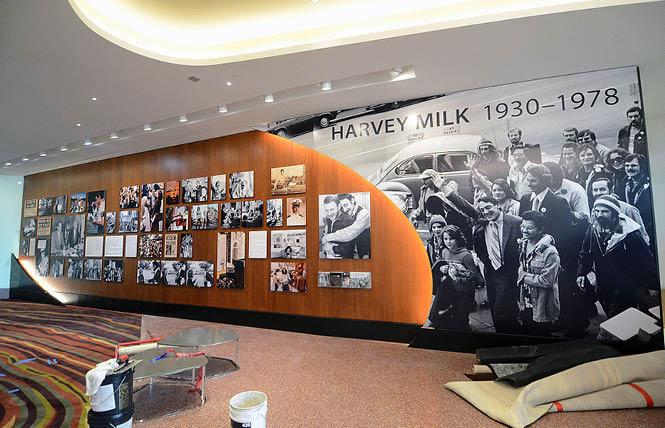 Come March 24, the public will be able to see San Francisco International Airport's permanent installation honoring the late gay supervisor Harvey Milk in the under-renovation terminal named in his honor.

That Tuesday the airport will open to travelers nine new gates in what is known as South Harvey Milk Terminal 1. American Airlines, Southwest, and JetBlue airlines will relocate their check-in operations to that portion of the building, as where they are now located will be the next area of the terminal to be renovated.

Immediately to the left of the new American Airlines check-in area, directly in front of the entrance doors to that section of the terminal, airport visitors will find a small nook that houses the Milk installation. Its design is reminiscent of a 1970s den or rec room in a private home, as it sports wood paneling, olive green and burnt orange swivel chairs, and a wavy carpet featuring a maroon, green, and red color palette.

"It should be a wonderful amenity for everyone flying through here," said Tim O'Brien, assistant director and curator of exhibitions for the SFO Museum.

O'Brien provided the Bay Area Reporter a sneak peek Friday, March 6, of the installation "Harvey Milk: Messenger of Hope" in what the airport is referring to as the Milk terminal's Central Inglenook. The airport had to cancel plans to dedicate it March 11, due to the city's recommendations to limit the spread of the coronavirus.

Unique space
Architecturally a dead-end space, as it leads to nowhere, it is a rare opportunity for the museum staff to locate an exhibit in a section of the airport that isn't a hallway or other area that people are constantly passing through, noted O'Brien.

"We love to get a dead-end space. It is a destination, meaning once here it is what you are here for," said O'Brien, a straight ally who co-curated the installation with Kai Caemmerer. "It is a rare space out here where we are not revolving art. It will honor Harvey Milk as long as it stands."

It features 43 images that provide airport visitors a snapshot into the various stages of Milk's life, from his days in the U.S. Navy in the early 1950s to a community activist and groundbreaking politician in San Francisco during the heydays of the 1970s. The images are arranged chronologically right to left and mounted on the wall in varying sizes on dye-infused aluminum.

"We love these for their durability in such a public space and we've been very pleased by the color fidelity and resolution," noted O'Brien. "They are not sensitive to light so they don't fade."

There is no signage explaining the photos and reproductions of printed materials on the wall. On a column next to the installation is listed the names of the 16 people whose photographs are included.

One was taken by Milk himself in 1976 and features a rainbow over the Castro Street building where he had his camera shop. The image was used in the store to show customers the different quality of the photographic paper they could buy.

"So I think that is a special one," said O'Brien.

To learn more about each image, people can scan with their phone a QR code on a brochure that will be stocked in the area. There will also be a printed catalogue that has the information for each image, and people are free to take it as a keepsake.

"We decided not to put any didactic on the wall," or educational text, explained O'Brien, "because we want the images to speak for themselves."

A glass wall separates the inglenook from the secured-area of the terminal on the other side. It is see-through so people not traveling through the airport will be able to see the second-half of the Milk installation on the other side when it is mounted sometime later this year.

There is a bank of escalators in front of the inglenook that for now lead people to a new space upstairs on the mezzanine level for the USO. Eventually, when the terminal's $2.4 billion remodel is completed in 2023, the escalators will lead to and from another security checkpoint and a walkway to the airport's AirTrain system that shuttles between the terminals and long-term parking garage.

Formerly known as Terminal 1 and rechristened the Harvey Milk Terminal by city leaders, it is the first airport facility in the world named after an LGBT leader. Milk was the first gay person to win a political office in San Francisco and California with his 1977 election to a seat on the Board of Supervisors. Tragically, disgruntled former supervisor Dan White killed Milk and then-mayor George Moscone inside City Hall the morning of November 27, 1978.

After a protracted fight over a proposal to rename the entire airport after Milk, which was rejected, city leaders opted instead to name one of SFO's four terminals in honor of Milk. Visitors to SFO arriving by either car or the SFO AirTrain can now clearly see the new signage posted to the facade of the terminal's south end denoting it as "Harvey Milk Terminal" in large black letters and as "Terminal 1" in slightly smaller letters below Milk's name. 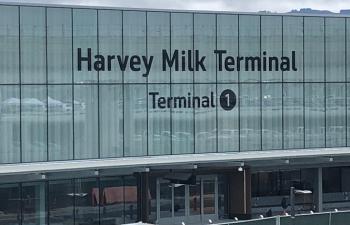 It blocks off the rest of the facility still being remodeled and measures 380 feet long by 30 feet tall. It is slated to come down sometime in early 2021.

Most of the images presented in the permanent installation came from the ones featured on the temporary wall that were sourced from public submissions or the archives of the GLBT Historical Society and the James C. Hormel LGBTQIA Center at the San Francisco Public Library. A few are new, such as one that shows Milk in his Navy service dress khaki uniform standing outdoors on a driveway with his mother, Minerva. It was taken in 1954 by an unknown individual.

"Hopefully people come away with a sense of Harvey not just as an activist and political leader but as a human being," said O'Brien.