Electile dysfunction in the Castro 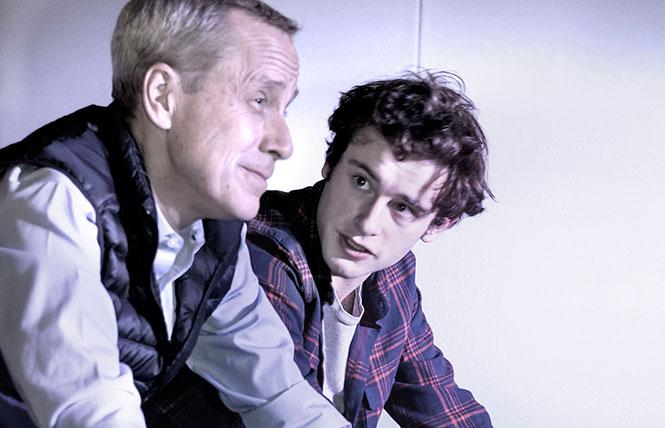 It's a good thing that Theatre Rhinoceros has been presenting its recent readings and productions in the cozy ad-hoc confines of the Spark Arts gallery on 18th Street. First, because it's nice to have some queer-oriented performing arts activity in the Castro, where lately, falafel wars have seemed more prominent than faggotry. Second, because this informal storefront setting is likely to undermine audience expectations, freeing the Rhino to engage in some of its quirkier inclinations.

That certainly includes "Radical," the company's current production, written and directed by artistic director John Fisher, who beams maniacally into an iPhone, gives audience members a lift in a ZipCar built from rolling chairs, and briefly appears in the briefest of swimsuits over the course of an antic, freak-flag-flying show chockablock with weirdness, charm and half-baked political philosophy. It's a very San Francisco piece of work. Or two.

On the one hand, "Radical" is a dark but jaunty social satire. Fisher plays Jack, a creepily chipper candidate for District Supervisor, unaffiliated with any party, but in most respects a small-l libertarian. Among his proposed policies (or more accurately, personal stances he thinks others would be wise to pick up on): Don't pay to ride public transit, because the service is lousy; pee in public, wherever you like; red lights are a waste of time; invite the homeless to your place for dinner. "Homeless," he declares in one of Fisher's wickedest lines, "is an Identity. We need to respect that!"

Jack is heavily covered — and his messages are amplified — by a local internet news service run by entrepreneurial 20something Diana (Polly Levi: Real name? Or a pan-sexual, meta-theatrical gag via Yonkers?) and her sensitive-guy cub reporter, Plant (Jake Soss). Diana is cynically using Jack as clickbait, but Plant is gradually seduced by his ideas.

But over the second half of its speedy, intermissionless 80 minutes, "Radical" whips itself into soap operatic froth. In one skeevy reverse-Weinstein scene, we learn that Diana has more than a professional interest in Plant. Then we find out that Plant's seduction by Jack goes beyond the intellectual. The three of them postulate about each other's masturbatory fantasies, their lust triangle's corners sharpening into potentially lethal weapons. By the play's end, Jack has registered Republican and is leading a Trumpian rally at the Bill Graham Civic Auditorium. At least one of the characters dies.

There's some clever improvisation along the way, including a town hall where Jack fields questions from the audience. And there's some delightfully silly self-referential dialogue about supporting local artists, theater productions in art galleries, and the characters running over to Molly Stone's (they really exit the gallery, which is next door to Molly Stone's). There's lots going on, but not enough of any of it for "Radical" to really cohere. Still, all three performers are appealingly playful, and Fisher has no shortage of entertaining observations and witty bon mots about our city to share. When you step into a Castro art gallery after hours to find creative energy crackling and laughter filling the room, you've found a party worth joining.