Michael Longoria Goes to the Movies 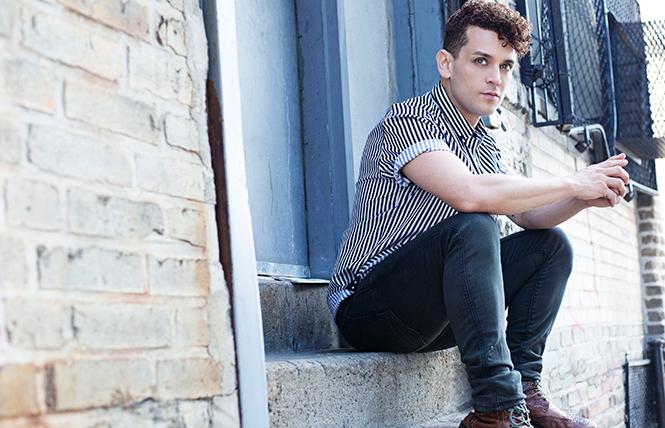 Michael Longoria, best known for his star turn as Frankie Valli in Jersey Boys on Broadway, takes to the elegant stage of Feinstein's at the Nikko on October 16 for an evening oF songs taken from the silver screen. Longoria's show, 'Like They Do in the Movies,' is a live version of his same named album, and features hits like "Evergreen" from A Star Is Born, "I Will Always Love You" from The Bodyguard, "Take My Breath Away" from Top Gun, and the beautiful "Unchained Melody" from Ghost.

It's the latest project for the busy performer who, in addition to his solo shows, is also currently touring in The Midtown Men, a retro-themed vocal quartet now enjoying its tenth tour. The group has been filmed for a PBS special titled Meet the Midtown Men. Longoria, a regular on Broadway, was also seen in the musical Hairspray. 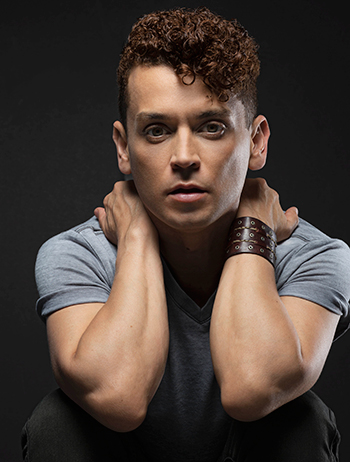 "Hairspray was a dream," Longoria told the Bay Area Reporter in a phone interview. "I still remember how the theater smelled that summer when my dream to be on Broadway came true. I had been hired to swing the seven male ensemble tracks, but by the end of my time there, I had gone on for almost every part in the show!"

Longoria recalls one particularly harrowing -and educational- experience from his Hairspray tenure. It was the night another actor had called out, an actor whose track he hadn't yet learned.

"But as they say, the show must go on," he said. "The producers threw me on in a track I had never performed. It was terrifying. Moving set pieces and oncoming chorus dancers pushing and pulling me to my marks. I learned a lot that first show. After that experience it became almost impossible to be scared about going on for any other part since that experience was so terrifyingly wonderful."


You from Jersey?
The actor played two roles in Jersey Boys.

"I originated a 16-year-old version of the famous actor Joe Pesci in the original cast of Jersey Boys on Broadway," Longoria said. "He put Frankie Valli and the Four Seasons together back in the day in Jersey. It was a featured role at night, while I also played lead singer Frankie Valli for the matinees, eventually playing Valli full time. It was a real actor's playground being able to play two real-life legends as characters in a Broadway hit." 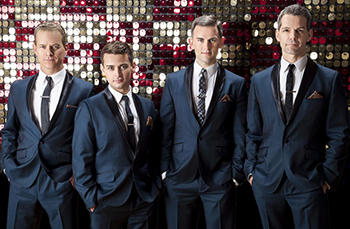 Jersey Boys and The Midtown Men were not Longoria's first exposure to older music. He has an affinity for older tunes that goes back to his childhood, when he and his mom would clean the house listening to what she called "the Oldies."

"Without knowing it, I learned the melodies and lyrics to the greatest hits of the 1960s that would eventually be my door to the Broadway stage," recalled Longoria.

"Both Hairspray and Jersey Boys are musicals that take place in the 1960s. Those early listening days were my training on how to sing a love song from the heart. So many of those early singers from the 1960s were young and completely untrained. What we hear on those recordings are raw and real emotions."

The Los Angeles native, who is now openly gay, grew up in what he calls a very Mexican-American and Catholic environment. He always felt that he couldn't be himself in that environment: being himself meant potential rejection and danger. He often dreamed of having a life where he could be free to be himself. 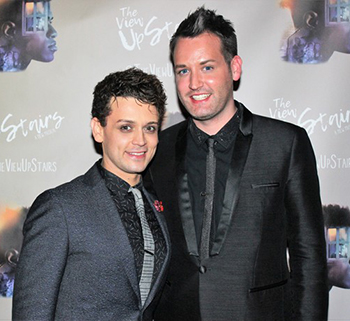 Michael Longoria with his boyfriend Taylor James at a production of The View Upstairs.

As a solo recording artist and as a concert performer, Longoria wrote "Merry Me This Christmas" and "Kiss Me (Like They Do in the Movies)," two songs about winning and losing in love as a gay man. He feels that it's important that people hear him singing these songs and know that he's singing about a guy.

"Whenever I question how much of myself I should be putting out there, I think about young people who may be struggling to live in their truth out there today," he said.

"One of them might hear one of my songs and see themselves in the storyline. I am living my truth for them, and also for the little me who dreamed that this would one day be my life."

Longoria says that his night at Feinstein's will be a special evening for him. He wants his audience to be prepared to sing along and feel with the songs he sings at the club, with what he calls a collection of the best from the silver screen.

"I gravitated toward songs that make me tear up or feel undeniable joy," he said. "Our human experiences knowing and loving each other have a lasting effect on our lives. Heartbreak is necessary to know that we have loved in the first place. All of these songs are professions of love. 'I Will Always Love You' from The Bodyguard and 'Nothing's Gonna Stop Us Now' from Mannequin are a couple of songs from my concert that will take you back to a time when going to the movies was magical and it always ended with a killer song that you walked out of the theater humming."

Longoria says that he's having a blast in the recording studio. He hopes to one day graduate to the movies. His dream is to star in a movie musical. For those not sure if they should come out to see him perform, he offers these simple words.

"Damn, that boy can sing! This concert will be a good show to bring a date to. With so many words of love being sung out loud, it'll be hard not to sing along and hold your lover's hand."

Michael Longoria: Like They Do in the Movies, Wednesday October 16, 7pm. $25-45. Feinstein's at the Nikko, 222 Mason St. www.feinsteinssf.com