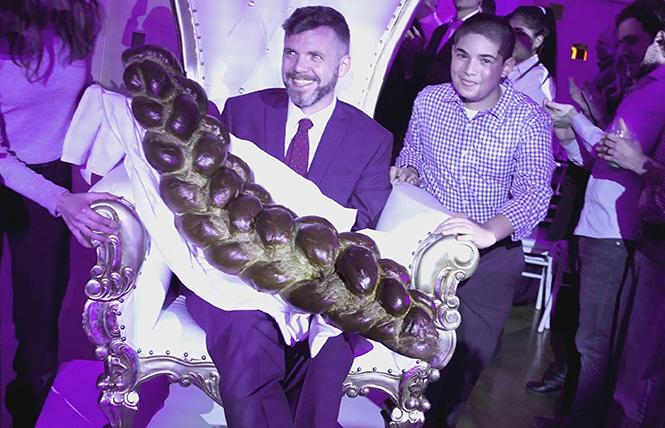 It wouldn't seem like a promising premise for a film: a gay man from a poor Midwestern Mormon family, who is an LA cancer survivor, writer and comedian, converts to Judaism at age 31, as we follow preparations for his November 2017 Bar Mitzvah. Yet this documentary, "Latter Day Jew" (as in Latter Day Saints, the official name for Mormons), about H. Alan Scott, chronicling his spiritual and cultural transformation in an entertainingly candid way, became a hit at this year's San Francisco Jewish Film Festival. Scott appeared on the Castro Theatre stage after the screening to huge applause acknowledging his artful way of crossing boundaries, part of a universal story of "finding out who you are and where you belong."

The documentary charts his hilarious yet poignant path to become the "best Jew possible," putting his own gay stamp on this ancient tradition. "Obviously I can't spiritually become a man without understanding where I came from," so the film explores growing up Mormon and gay, the ultimate outsider, though his mother Kathleen is supportive, disagreeing with the church on other issues as well. We meet his gay Rabbi, Zach Shapiro of Temple Akiba, appreciating its diversity, as Scott sits in on a Bar Mitzvah class with a bunch of 12-year-olds who become his accomplice-friends. We accompany him retrospectively through his chemotherapy for cancer, an experience that prodded him to take Judaism more seriously. He shares a Passover seder in New York with a Mormon couple converting to Judaism. He visits Israel, attending Tel Aviv Pride, buying his first "talit" in the Jewish Quarter of Jerusalem, wearing it to the Wailing Wall and his Bar Mitzvah. We encounter his mentor, Yiscah Smith, a trans Jewish educator who experienced a spiritual rebirth after her gender reassignment surgery. He eventually discovers that being Jewish is more than being born to a Jewish mother. "It's about community, it's about your outlook on humanity," he explains beautifully in a speech at his Bar Mitzvah, which serves as a reunion for all the people he met on his journey. Scott spoke to the B.A.R. in a face-to-face interview. 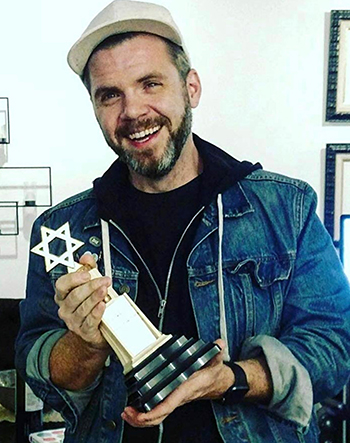 Scott had approached director Aliza Rosen about making a TV show based on his popular true-crime podcast, and she asked him about his Star of David necklace. He told her his story, and she immediately wanted to make a documentary. "She saw the vision, and I went with it." As for reasons why he decided to convert to Judaism, Scott replied, "There is no simple answer. I always felt Jewish, fundamentally it was always a part of my spirit, even as a Mormon, though I didn't have the vocabulary for it. Throughout my 20s in New York [as a political consultant], I was surrounded by Jews, with many Jewish friends. I wasn't a practicing Jew, but I was leading a very Jewocentric life. It was only when I moved to LA that I decided to pursue it more formally."

His cancer diagnosis/treatment as soon as he arrived in LA gave him spare time to read and study, clarifying for him that faith is about living life now rather than what happens after you die, a Mormon focus he never liked. He discovered that women were always central in his life, and he became inspired by powerful Jewish women in the Reform movement who pushed for change.

Towards the end of the film, Scott proclaims, "I can't be the Jew who I am without the Mormon I was, meaning we are the experiences we have lived." Throughout the course of his story, Scott learns that "I am the best Jew because I am me, which involves talking, listening, and growing with other people. I wouldn't say I'm religious, but I wouldn't say I'm secular either. I'm deeply committed to Jewish community. For me, so much of spirituality is the community you belong to, the one you choose and are willing to step up for." Scott believes Judaism has made his life better. "I feel more centered. Before I converted, it was always 'The H. Alan Scott Show,' with no identity apart from the comedic-writer one. I needed a larger identity beyond myself, a place where I belonged, my home."

For Scott, his film's main theme is freedom of choice. "You are not defined by who you were told you were supposed to be in the younger part of your life, or who society tells you to be. It's a uniquely queer message because LGBTQ people are told time and again, 'You're supposed to be straight, this isn't the direction you are supposed to go, because your life will be so hard, leading to endless struggle.' These are all comments to stop you from being the person you are meant to be. Queer to me speaks to my desire not to be categorized. In a spiritual sense I wasn't supposed to be Mormon. I was always Jewish, but I had to get to that point when I could make that realization."

As a gay man, Scott believes he is revitalizing Judaism. "Through my story, I'm telling born Jews who might have left the faith after their Bar Mitzvah and are now returning, you can be any type of Jew you want. You don't have to be the hardcore religious Jew your parents wanted you to become." Scott understands LGBTQ people who reject institutional religion since their criticisms are often valid. He takes a nuanced view on being part of a tradition where strands of it can be homophobic. "We need to be open to the idea that people view the world differently. It's cool if you think that and I think this."

Scott feels the film has sharpened his voice. "Before, I was all over the place, and now I'm much more direct, secure about who I am in my work and in my life. My comic act previously was all dumb jokes and silly videos, but now I've incorporated talking about my faith. It was difficult at first, yet now it's second nature. It helped me learn that not everything has to be funny, like Hannah Gadsby. It's fine if the audience doesn't laugh through the entire show. It's okay to let people think for a minute. Everything can be funny, but doesn't need to be funny."

Life is looking up for Scott, now cancer-free, with a new boyfriend. "Latter Day Jew" continues its screenings at film festivals, with the hope it will be eventually be streamed, perhaps on Netflix.