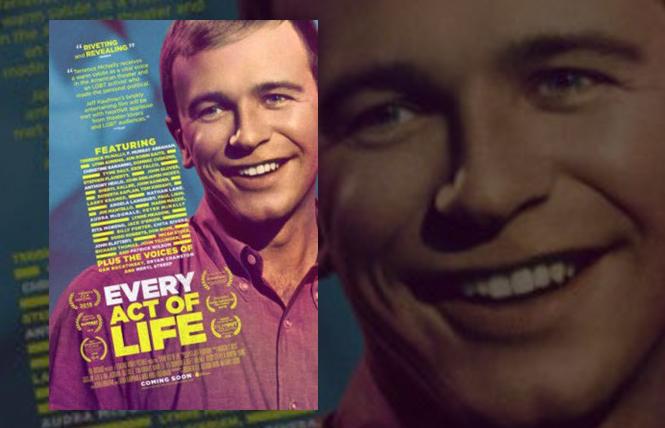 "I'm of the school 'Write what you know.' You can educate yourself, but the best writing usually comes from the heart," says playwright Terrence McNally. Whatever criticisms one might have of his work, a lack of authenticity and passion cannot be part of them. He revealed openly gay characters to a broad mainstream audience. Filmmaker Jeff Kaufman made the biographical documentary "Every Act of Life," detailing McNally's career successes, disappointments and influence. Featured as part of PBS' "American Masters" series, it remains streamable free for a month. Opening with McNally receiving the first of four Tony awards, McNally and his celebrity admirers concur that no one loves the theater as he does. Few have been as dedicated practitioners to its art.

Growing up in Corpus Christi, Texas, his early life was hellish, with both his parents constantly drunk, and his father, a Schlitz beer distributor, physically abusive. McNally says, "They never got me" or accepted his gayness. A high school English teacher, Mrs. McElroy, encouraged his talent, and he attended Columbia University. He met his first lover, playwright Edward Albee, beginning a four-year tempestuous, often alcohol-sodden relationship, with Albee non-supportive of McNally's career. He was hired by writer John Steinbeck to tutor his son while he and his wife toured Europe. Steinbeck advised McNally not to write for the theater, "as it will break your heart."

McNally's 1964 Broadway debut, "And Things That Go Bump in the Night," featuring an out gay character, was a fiasco, though his 1975 comedy "The Ritz," a farce set in a gay bathhouse starring Rita Moreno, was a smash. But it would be over a decade before McNally wrote another hit, "Frankie and Johnny in the Clair de Lune." His more successful, gay-oriented plays began in 1989: "The Lisbon Traviata," "Lips Together, Teeth Apart" and the AIDS-focused "Love! Valour! Compassion!," as well as two popular heterosexual-oriented plays, "A Perfect Ganesh" (based on his travels to India) and "Master Class" (about his idol Maria Callas). In addition to his 36 plays, McNally has written four opera librettos, and 10 books for musicals, including "The Rink," "Kiss of the Spider Woman," "Ragtime" and "The Full Monty."

The film chronicles McNally's roller coaster personal relationships, including a volatile period with the closeted actor Robert Drivas, who later died of AIDS; with playwright Gary Bonasorte, who founded the Rattlesnake Theater Company and an AIDS research clinic, also dying of HIV; a secret affair with playwright Wendy Wasserstein; and his current partner, civil rights attorney Thomas Kirdahy, whom he married in 2010 after they saw McNally through his victorious fight over lung cancer together. Angela Lansbury intervened in the mid-80s, telling McNally he was destroying himself and his potential as a writer with alcohol, which led him to stop drinking and revitalized his career.

McNally gets to the core of the human condition in his plays, which he feels is a yearning for connection. "An artist responds to the world and tries to make sense of it, even the bad things, like AIDS." While openly gay and an LGBTQ activist, he rejects the moniker of "gay playwright," feeling it marginalizes him.

Maintaining "all theater people are building surrogate families," he has had deep rapport with most of his actors. Audra McDonald, Nathan Lane, F. Murray Abraham, Christine Baranski, John Slattery, and Patrick Wilson (all talking heads in the film, along with director Joe Mantello, Larry Kramer, Chita Rivera, and Rita Moreno) attribute the launching of their careers to him. The documentary borders on hero worship, with little scrutiny of the plays themselves nor much analysis of his strengths and weaknesses as a dramatist, often critiqued as being too crowd-pleasing and sentimental. His track record is spotty, with one winner followed by multiple failures. His most controversial play, "Corpus Christi" (1998), about a gay Jesus, which received death threats and almost destroyed the Manhattan Theater Club, is only sketchily mentioned. The question whether his work will survive long-term isn't considered. But there is little doubt that McNally is a key figure in ending the invisibility of gay men in the American theater.