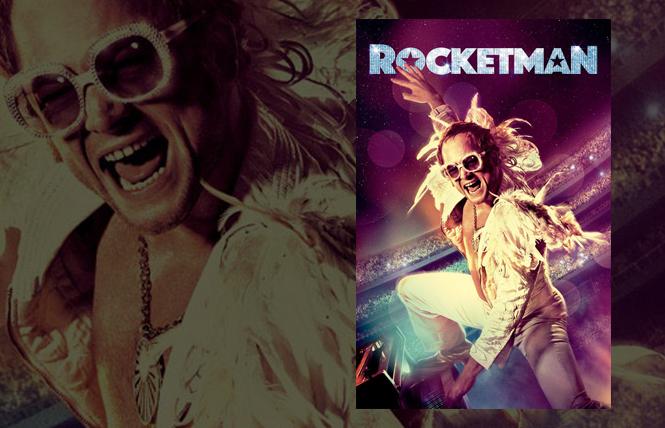 Beginning with blockbuster music specials and ending with the annual San Francisco International LGBTQ Film Festival, the Castro Theatre is jumping in June.

"Rocket Man" 29-year-old British TV star Taron Egerton combines an appealing vulnerability with low-key charisma as Elton John, in a much-anticipated film bio that traces the openly gay British recording artist from his youth as a prodigy at the Royal Academy of Music, through his enduring musical partnership with lyricist Bernie Taupin. We also get his battles with depression, drugs, and a lifelong struggle to be comfortable as a fabulously successful rock superstar.

Born Reginald Kenneth Dwight in Middlesex, England, the musical genius who would become Elton John was the son of a dad who couldn't express affection. Kicking off his career as leader of a backing band for the folk artist Long John Baldry, Elton John discovered he had a knack for composing vibrant rock scores, but little feel for lyrics. Developing a Pop Art fashion sense capped by a signature taste for cartoon-like eyeglasses, Elton churned out a series of Top 40 hits that dominated the charts in both the UK and USA: "Crocodile Rock," "Bennie and the Jets," "Philadelphia Freedom," "Don't Go Breaking My Heart." In a sense, Elton successfully filled the void in the pop world created by the late-60s breakup of The Beatles.

"Rocket Man" traces the volatile trajectory of a career beset by the natural ups and downs of the music business, including exploitative agents and the crushing pressures pushing gay performers to maintain a straight public facade. The film it most resembles in style and energy is Bob Fosse's boldly fractured 1979 auto-bio "All That Jazz." If while watching "Rocket Man" you recall Roy Scheider's great tagline as the drug-addicted Fosse "It's showtime!" you'll receive "Rocket Man" in the spirit it creators intend.

Co-starring Jamie Bell as Taupin, Richard Madden as John Reid, and Bryce Dallas Howard as Elton's mum. Directed by Dexter Fletcher, who took over "Bohemian Rhapsody" after its original director Bryan Singer was fired; written by Lee Hall ("Billy Elliot"); executive produced by Sir Elton; "Rocket Man" is a high-energy musical romp that plays to all the Castro's strengths in projection and sound. (6/5-10, 12, 14-17)

Frameline 43 Our coverage will appear over three upcoming issues. (6/20-30)