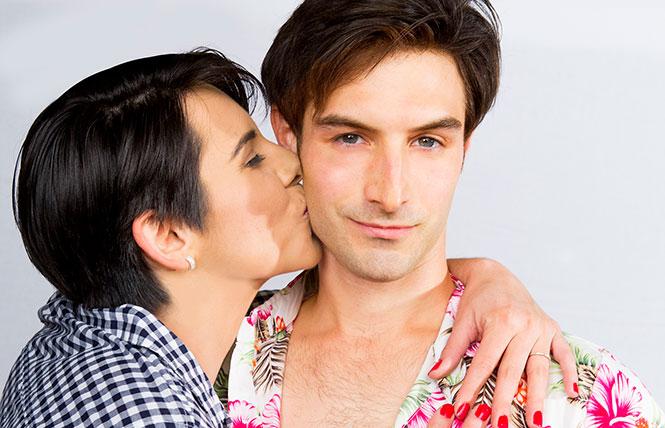 Carol Ann Walker as Liza Minnelli, and Justin Genna as Peter Allen in "The Boy from Oz," a Theatre Rhinoceros production directed by John Fisher at the Gateway Theatre. Photo: David Wilson.

In 1981, "Fly Away" flapped its way to a middling #55 on the Billboard Hot 100. The record was Aussie singer-songwriter Peter Allen's biggest American hit. But it isn't even included in "The Boy from Oz," the jukebox-cum-junk-drawer musical based on Allen's life now being mounted by Theater Rhinoceros.

The presence of "Fly Away" is not missed. The tune is no more memorable than Allen's paltry four other U.S. radio hits as a performer, all Adult Contemporary snoozers. Only two of those make the show. On the songwriting front, "The Boy from Oz" would have you believe that Allen hit his peak with "Arthur's Theme (Best That You Can Do)." Played by lanky, limber Justin Genna, he gloats that royalties from the Oscar-winning 1981 tune bought him a Malibu beach house.

In fact, that song, a smash for Christopher Cross, was composed by Burt Bacharach, with lyrics primarily by Carole Bayer Sager, his then-partner, who incorporated one line from a song she and Allen had abandoned years earlier. According to Sager's 2016 biography, Allen insisted on writing credit, leading to major resentment from Bacharach.

A complicating wrinkle ignored in the show's book — by "Bent"'s Martin Sherman, apparently bent over backwards for a payday — is the fact that the female lead in "Arthur," the movie, was played by Liza Minnelli, Allen's still-supportive ex-wife. Making matters worse still is the fact that, in the show, the song is sloppily used to introduce Minnelli and Allen's 1960s romance (15 years prior to the tune's real-life composition).

This is all characteristic of a smugness that typifies not just "Oz"'s central character but the entire show, which is way overconfident in assuming Allen's ultimate irresistibility. Never the beloved pop-cultural juggernaut that "Oz" would have us imagine, Peter Allen was a reptilian carpetbagger and a coattail-hanger. When a young Allen meets Judy Garland while working as a lounge singer in Hong Kong, we watch him brown-nose his way under tailfeathers to get hired on as her opening act in the U.S. His next move is to marry Minnelli — despite knowing full well that he's gay — further wheedling his way into showbiz circles. His success story amounts to little more than cunning and celebrity-adjacency.

Leandra Ramm turns in a strong performance as Garland, managing to capture the legend's spirit without resorting to either mimicry or camp. Carol Ann Walker pulls off a credible Liza, particularly in the show's liveliest ensemble number, "She Loves to Hear the Music." But in "The Boy from Oz," the real-life stars are turned to supporting characters, and a slimy charlatan is given the spotlight.

The production itself, directed by John Fisher, is not particularly noteworthy. There are no sets to speak of (the bulk of the show is played against a dull black wall), and the cast's energy level rarely rises above high school musical levels. But the biggest problem is the material itself. The whole damn show should just "Fly Away."