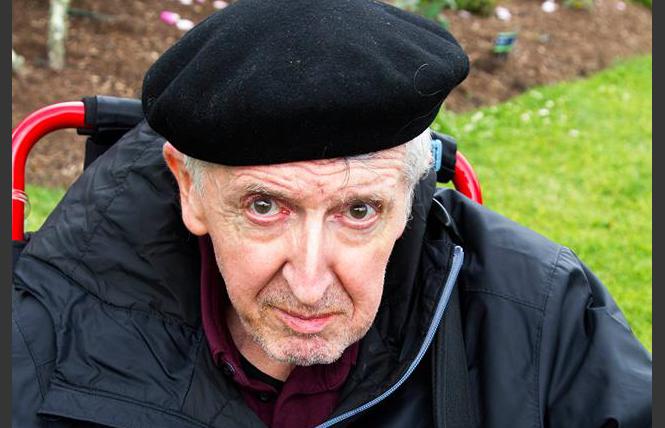 Ernie Asten, the retired fourth generation patriarch of the Cliff's Variety legacy, died March 15, after a 14-year battle with Parkinson's and multiple systems atrophy, or MSA. He was 71.

Mr. Asten grew up in the Castro district and, much like his own children, within the store itself, said his daughter, Terry Asten Bennett, a straight ally who now manages the store.

His grandfather, a creative thinker in his own right, instilled in him the concept that knowledge is power and with that power you can do anything, she added.

"Ernie was a maker before the term existed," Asten Bennett wrote in a Facebook message to the Bay Area Reporter. "He was proficient working in many mediums and it's safe to say many of the homes in the neighborhood have been touched by his knowledge, his skills, or by the products sold at his family's Castro Street store."

Mr. Asten was born July 19, 1947 in San Francisco and never moved from the Castro neighborhood, his daughter said.

He and his grandfather are acknowledged as being the creators of the original Castro Halloween celebrations in the 1950s, Asten Bennett said. During the neighborhood renaissance of the 1970s, Mr. Asten was also known for his ability to repair or replicate many of the irreplaceable Victorian plumbing and architectural elements needed in restoring the Victorians of the neighborhood.

Longtime gay rights activist Cleve Jones wrote on Facebook that Mr. Asten was an early ally to the LGBT community.

"He and his family welcomed Harvey Milk and LGBTQ immigrants from around the world to what we now know as 'the Castro,'" Jones wrote.

For decades he and his wife of 50 years, Martha, navigated the ever-evolving neighborhood business climate, always focusing on delivering the items the community wanted in a format that was easily shoppable and backed by a wealth of knowledgeable staff, Asten Bennett said.

She noted that the store has received numerous honors over the years, including being recognized by the state Legislature as one of the best small businesses in California. In 2017, Cliff's was chosen as a San Francisco legacy business.

"My father instilled in me a deep sense of community and the importance of supporting those around you," Asten Bennett wrote. "I have worked to live up to that standard and will continue to honor his legacy. We are grateful for the support of our community. Sharing your memories of Ernie helps to heal the heartbreak we are all feeling."

Mr. Asten's interests beyond the business were also boundless. He and his wife traveled the world to experience astronomical events and to hone his skills in photography.

He was also a proficient jazz pianist and at one time had his own recording studio, Asten Bennett said. It was called the Hartford Studio, and from 1968 to around 1976 he recorded names such as Carlos Santana (in his garage on Hartford Street); Terry Dolan, of Terry and the Pirates; Jimmy Moscoso; and Ronnie Montrose.

In the 1980s he returned to college to study calculus and physics just for the fun of it, Asten Bennett said.

In addition to his wife and his daughter, Mr. Asten is survived by another daughter, Marian; four grandchildren, Ceci, Camille, Balin, and Cooper; and his great-grandson, Aiden.

Asten Bennett said there are no plans for a funeral, but that some sort of celebration would be held.

"His wish was to have a New Orleans-style procession down Castro Street," she wrote.

In lieu of flowers, donations in Mr. Asten's memory can be made to the Michael J. Fox Foundation or the UCSF Foundation, marked for the Movement Disorder and Neuromodulation Center.