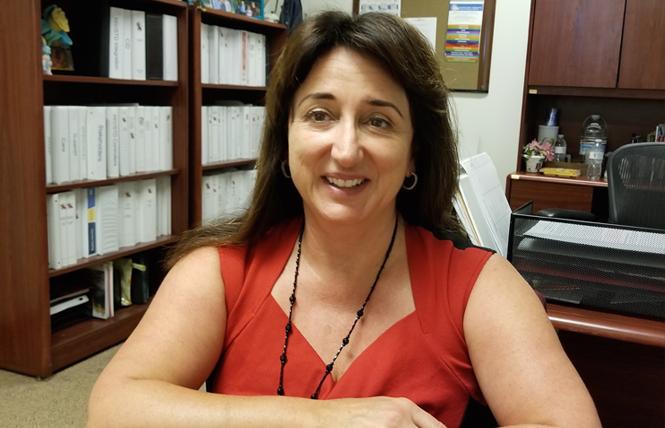 Marisa Ramos, Ph.D., is back as interim chief of the Office of AIDS within the California Department of Public Health.

As the Bay Area Reporter noted in early January, Ramos had taken on the role in July but then returned to her old job as acting chief of the Surveillance, Research & Evaluation Branch in the state AIDS office in December. The move came after the state's human resources department refused to grant an extension beyond the initially approved timeframe for Ramos overseeing California's statewide AIDS efforts.

But last week came word that Ramos had once again been cleared to serve as acting AIDS office chief. The need for interim leadership came about last summer with the departure of Dr. Karen E. Mark, a lesbian who had overseen the state AIDS office since 2011, to become the medical director for the California Department of Health Care Services.

It will be up to Governor Gavin Newsom to name a new, permanent state AIDS czar. But the search to fill the position has yet to formally begin.

"We are working earnestly, at all levels of government, to finalize the recruitment for the chief, Office of AIDS. We expect to announce this in the near future," wrote Johnson in a recent email to department staff that was shared with service providers across the state.

The leadership marry-go-round at the state AIDS office comes as nonprofits focused on HIV prevention and caring for people living with HIV and AIDS press state officials to develop a statewide plan to end the interrelated epidemics of HIV, hepatitis C, and sexually transmitted diseases like syphilis and gonorrhea. They are also seeking $60 million in dedicated funding in the state budget to address the trio of health concerns.

Courtney Mulhern-Pearson, the senior director of policy and strategy for the San Francisco AIDS Foundation, told the B.A.R. this week that it is unclear who may be chosen to lead the state Office of AIDS.

"I have not heard about anyone who wants the job," she said. "We are waiting until the job is posted to have conversations about who we want to see in that permanent role."

One of the first two out gay men elected to the state Assembly in 2002, Laird is running to succeed Senator Bill Monning (D-Carmel). Due to term limits, Monning is ineligible to seek another term representing the 17th Senate District seat along the Central Coast.

Laird, 68, lost a 2010 Senate bid, leading to former Governor Jerry Brown appointing him as California's secretary for natural resources in January 2011. He stepped down from the cabinet post January 7 hours after Newsom took his oath of office.

This week the Santa Cruz resident announced he had won endorsements from both the California Legislative LGBT Caucus, comprised of the seven out lawmakers serving in the Statehouse, and BAYMEC, the Bay Area Municipal Elections Committee that aims to elect LGBT leaders and straight allies in the South Bay and Central Coast.

During his time in the Assembly, Laird chaired the LGBT caucus. He is seen as the heavy favorite to win the Senate race next year, helping to bolster the ranks of the affinity group for out state lawmakers. The caucus will see two of its current members depart at the end of the 2020 legislative session while the five others are seeking re-election next year.

As of Tuesday, according to the Secretary of State's online campaign finance database, Laird was the lone person to have filed paperwork to seek Monning's seat. The 17th Senate District includes Santa Cruz and San Luis Obispo counties, the coastal areas of Monterey County, and southern Santa Clara County.