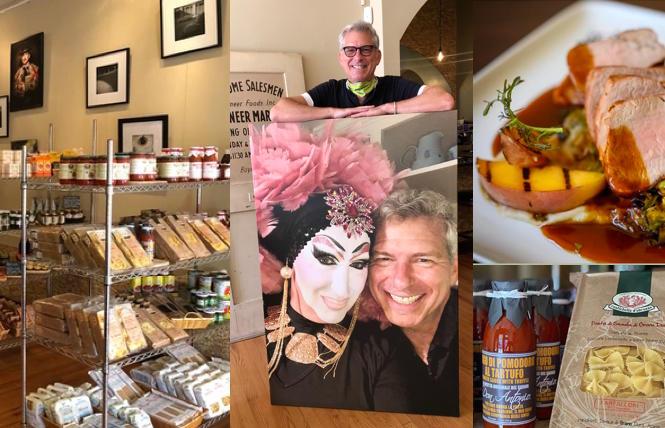 The restaurant's namesake, Sister Roma, and owner Matt Leum in an enlarged photo (center) and the various menu and shop items (left and right).

With so many businesses closing, it's great news to learn of an opening. Roma's Ristorante Italiano, which opened on August 4 at its South Park Third Street location, has welcomed shoppers of imported Italian delicacies, and to-go orders selected from their menu. In a unique nod to the LGBT community, its namesake is 'nun' other than Sister Roma.

The farm-to-table Italian eatery, with an emphasis on an inclusive, queer-friendly culture, has been welcomed to its neighborhood, despite reticence to shop or visit shops.

For owner Matthew Leum, the timing was certainly a challenge, as he closed escrow on the restaurant the day before San Francisco shut down. "I immediately owned and could not operate the restaurant," said Leum in a phone interview with the Bay Area Reporter.

While renovating the former La Briciola space (floors redone, walls painted), Leum had been planning the restaurant since before the lockdown began. While he had hoped to be able to open with some indoor tables this month, the opening happened in early August as an Italian market with takeout and delivery only.

"I was hoping for the July 13 end of the ban on dine-in restaurants," said Leum (the venue has no outdoor space). "But on July 6, when the ban was extended, I said, 'I'm gonna open a gourmet Italian grocery. We're gonna fire up the kitchen for take-out and delivery, and let's just do this.'"

Three weeks later, after a ribbon-cutting ceremony, they opened what he now calls his "groceraunt."

"People stop in daily just to thank us," said Leum of the once-thriving lunch crowd that's now reduced to local residents, lured in by his tenacious neighborhood menu-flyer drop-offs.

"Little by little, we're getting the word out," said Leum, who previously worked for almost three decades in high tech recruiting, including in Paris, where he became interested in the hospitality industry as a possible career change. "I would take clients out to dinner, and got to know the owners of restaurants I would frequent," he explained. "I've had it in the back of my mind, but that's really where it all started."

Leum decided to name the restaurant after his longtime friend, whom he's known since before Roma had even seen a Sister of Perpetual Indulgence.

"Matthew was with me the very first time I saw a Sister in 1985," said Sister Roma in a phone interview. "We were all, 'What the hell is this?' I'd never heard of the Sisters."

Soon after, Roma grew to become one of the organization's most popular fundraising nuns, hosting countless benefits and the annual Easter celebrations.

Roma noted that along with the naming, Leum hopes that Roma's becomes more than a place for good food and wine. "He wants to make a place for community. He'll feature local artists on the walls, who can sell their work."

What's it like to have a restaurant (with an Italian double meaning) named after her?

"It's a real honor, and flattering," said Roma. "It's such a difficult time, so it's great to have something new. The wheels were in motion prior to COVID, but I think it'll succeed. Matthew's a consummate entertainer and host, and also a successful business person. He's also sincere and honorable."

Leum gets his groceries from a contact at Ital Foods, one of many connections he's made since Sister Roma's initial social media announcement. "We spent an entire day going over their catalog, and learning the stories behind every product. It's all really unique imported Italian goods."

From the socially-distanced opening, both the grocery and food delivery sales have grown. "It's been an adventure. That's for sure."