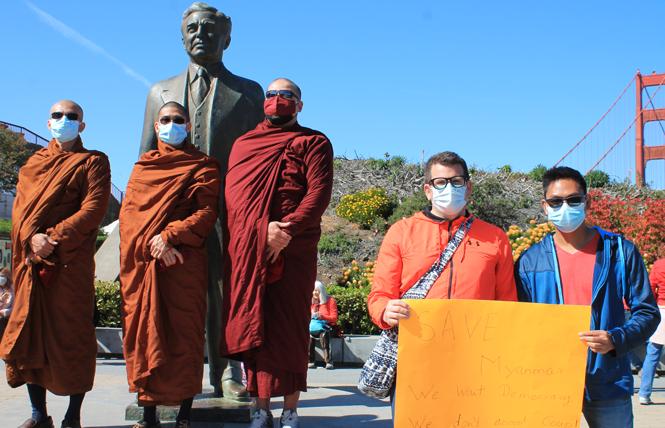 Kenny Kruse, left, foreground, and his fiancé, Yar Zar Min, marched across the Golden Gate Bridge with an estimated 300 demonstrators March 7 in solidarity for the Burmese people and against the coup in Myanmar. Photo: Heather Cassell

Yar Zar Min and his fiancé, Kenny Kruse, were among the red-clad demonstrators who walked across Golden Gate Bridge March 7 in solidarity with the people of Myanmar.

An estimated 300 peaceful demonstrators turned out in San Francisco to protest against the military coup and in support of the Burmese people's calls to restore democracy in Myanmar. (People in Myanmar are called Burmese even though the country's name has been changed.)

It was reported that 52 demonstrators in Myanmar were killed by officers last week, as they continued to take to the streets protesting the military takeover of the country.

Two of the people killed last week were LGBTQ, Nyan Linn Htet, founder and executive director of Rainbow Star, an LGBTQ organization in Myanmar, told the Bay Area Reporter. (Nyan Linn Htet is his activist name to protect his identity.) 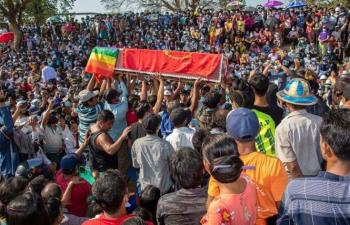 A crowd of more than an estimated 500 people gathered at Mg Htet Wai Htoo's funeral March 4 hoisting his coffin draped with a red cloth and the rainbow flag, said Nyan Linn Htet, who attended his funeral.

Mg Htet Wai Htoo, 23, a gay student at Mawlamyine University, was shot in the forehead by a police officer around 5:30 p.m. local time during the March 3 protest in the Thi Yi Myine Ward of Mawlamyine, Myanmar's fourth largest city.

"Mawlamyine LGBT family [and] community is pray[ing] for him," wrote the 25-year-old queer man, stating that Mg Htet Wai Htoo was loved.

He left behind a boyfriend, who attended the funeral, and both of their families, who accepted their relationship, Nyan Linn Htet wrote.

"They are promised to him we fight for democracy," wrote Nyan Linn Htet, whose organization has provided legal support to protesters since the beginning of the coup.

He has also taken to the streets protesting against the military's takeover of Myanmar along with other Burmese LGBTQ activists who are unified and "emboldened to fight more and harder," Nyan Linn Htet wrote.

"They don't feel fear," he wrote. "They fight for democracy."

He called the police and military coup "terrorism."

He was happy to know that people marched in solidarity in San Francisco.

"We need more support for this condition," he wrote.

Yar Zar Min, 32, called his fellow Burmese people "brave" for taking to the streets knowing what the cost might be. At the same time, "I am so sad for my people," he said.

Kruse, 35, his fiancé, added, "It's hard not to think about our friends in Myanmar and how much danger they are putting themselves in by going out on the streets."

"Back in Myanmar police and military are killing people who they are supposed to protect," said Yar Zar Min, who joined Kruse in San Francisco at the end of February just as the protests became more violent.

Sunday's solidarity march across the Golden Gate Bridge was Yar Zar Min's first day out of quarantine. He spoke out in support of his friends and family and called for the restoration of democracy back home.

It was also a chance for him to connect with the Burmese community in the San Francisco Bay Area.

Throughout the week, the two men received messages from their friends with photos and videos of the violence on Myanmar's streets.

"I'm getting a steady stream of messages from friends asking me to post videos or messages on Facebook because they are too scared to do it," said Kruse. "I think [it] just speaks to just how the military has created a really fearful environment."

The two men hope to see more LGBTQ people at future protests, they told the B.A.R.

The March 7 demonstration was organized by Jack Kornfield, founding teacher of Spirit Rock, an Insight Meditation Center in Marin County.

Kornfield was a monk in Myanmar 50 years ago, he said. Since the coup began, he has supported the Burmese opposition leaders from the San Francisco Bay Area with donations and tools to communicate around the military run media and internet and cellular infrastructure.

He said the opposition leaders told him, "We need to know the people in the world have not forgotten us."

According to the Dhaka Tribune, Tashnuva Anan Shishir was granted a scholarship to study public health at Brac James P Grant School of Public Health, along with another transgender woman Ho Chi Minh Islam, earlier this year.

The model and actor also signed onto two movies. She will play a female soccer coach in one of the movies, according to the newspaper.

The Suqian Intermediate People's Court in the eastern province of Jiangsu handed down its decision last week, reported the South China Morning Post.

It was the second time Ou Jiayong, who also uses the name Xixi, took on the textbook publisher, Jinan University Press, and lost, much to her disappointment and that of China's LGBTQ community.

"Maybe this ruling is to reduce controversy," she told the Post. "But it has also allowed textbooks that pathologize homosexuality to continue circulating, which is a pity."

Ou Jiayong was a 20-year-old lesbian college student when she started her legal challenge against the publisher in 2016.

She came across the psychology textbook, the 2013 edition of "Mental Health Education for College Students," during her first year at the South China Agricultural University in Guangzhou, her hometown in the Guangdong province. The book called being gay a mental disorder.

According to the New York Times, she attempted to have the publisher correct the error herself by writing an email, submitting a petition with 300 signatures in person at the publisher's office with no response. She then took the issue to the next level at the Press and Publication Bureau. The bureau responded that the content had no "factual or logical mistakes."

Ou Jiayong took the publisher to court, demanding the reference be removed and issue a public apology, reported the Times.

China decriminalized homosexuality in 1997. The Chinese Psychiatric Association removed the term "homosexuality" from an official list of psychiatric disorders in 2001.

The World Health Organization declassified homosexuality as a mental disorder in 1990.

Yet, almost half of the psychology textbooks used in Chinese universities described homosexuality as a type of disease, reported NBC News, citing a Tong Cheng Gay and Lesbian Campus Association's 2014 survey.

Now 24, Ou Jiayong completed her degree in sociology and moved to Hong Kong, where she works for a labor rights organization. She was unable to appear in court due to the global coronavirus pandemic, reported the Times.

She submitted two letters to the judges describing the pain of being discriminated against as a minority. The judges were not swayed.

Hong Kong is a semi-autonomous territory of the People's Republic of China.

China's LGBTQ community was inspired by Ou Jiayong's case and rallied behind her.

"The editor of the textbook apparently used viewpoints that do not match society's perception of sexual minorities today," said Ah Qiang, spokesman for the Guangzhou-based LGBTQ organization PFLAG, which supports families and friends of the queer community.

Ou Jiayong is not done. She may not be able to overturn the ruling, but there are other ways to push for change.

"My lawyer and I will have some public sharing sessions, write up notes with others in the community, and see if there's anything else we can follow up," she told the Post.

The body of Byeon Hee-su, 23, was found by emergency responders at her home in Cheongju, south of Seoul March 3.

Her death is being treated as a suicide and is under investigation. No note was found, reported the Global Times.

Authorities were alerted after a local mental health center where she received counseling reported to authorities that staff could not get in touch with her.

Last year, Byeon Hee-su, who was a staff sergeant in an army tank unit and had served in the military since 2017, lost her lawsuit against the South Korean army to reinstate her. In January 2020, the army deemed her unfit to serve after undergoing gender reassignment surgery in Thailand in 2019.

Transgender people are barred from serving in the military. They are categorized as having a mental and physical "disorder," reported the New York Times.

Lesbians and gay men can serve in the military but have complained of discrimination and abuse and have been subjected to investigations by military officials, the Times reported.

United Nations human rights officials wrote to the South Korean government that her dismissal would violate the "right to work and the prohibition of discrimination based on gender identity under international human rights law," in a letter last July.

Byeon Hee-su continued to campaign to be reinstated after she lost her case. She argued that there was no reason she could not fulfill her military duties.

Byeon Hee-su sued the military, claiming her discharge was unlawful. Byeon Hee-su's first hearing was scheduled to take place in a military court next month.

South Korea's transgender community has shown an outpouring of grief at the loss of Byeon Hee-su.