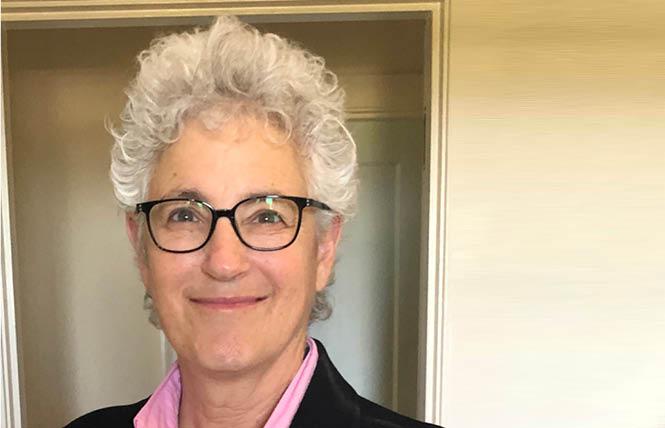 Mayor London Breed nominated Carol Isen to serve as San Francisco's human resources director, making her the first LGBTQ person to serve in the role, according to a March 9 news release.

"Carol has helped us navigate some of the biggest challenges we've ever faced, working to keep our employees safe, helping activate Disaster Service Workers to serve our residents during this pandemic, and now, working with departments and unions to make sure eligible workers who have been on the frontlines can get vaccinated easily and conveniently," Breed said in the release.

"As we look ahead to our recovery and the challenges that are before us, I'm confident that Carol is the right person to lead the department and that she will make sure our employees are supported and that we maintain a workforce that is diverse and inclusive," the mayor added.

Isen, who will need to be confirmed to the post by the Board of Supervisors, has served as the acting head of the city's Department of Human Resources — providing HR services to the city's workforce of 38,000 employees across its 60 departments — since October. Prior to that, Isen served in a number of municipal positions such as employee relations director for three years, Bay Area Rapid Transit chief labor relations director, and San Francisco Public Utilities Commission director of labor relations and community programs.

Isen stated she is honored to be moving from acting to permanent director.

"I am looking forward to working with the mayor, Board of Supervisors, elected officials, department heads, our partners from organized labor and our employees and take the bold action necessary to grow our relationships with the community, expand our partnerships with departments and to ensure improved culture, fairness, consistency and excellence in human resources for all city employees," Isen stated.

"She has long displayed her commitment to civil rights in the workplace, merit system employment, and promoting community development through job training and opportunities, as well as her support for transformative changes to how human resources works for employees to foster a modern merit-based employment system free of bias and nepotism," it went on to state.

That commitment to civil rights may prove to be particularly important for the department. As the San Francisco Examiner reported last year, a previous manager in the department, Rebecca Sherman, was accused of lying to a Black employee who filed a complaint of discrimination, as well as forgery.

At the time, Peskin told the Examiner that "This in many ways is more scandalous than what we learned about terrible but relatively petty corruption that was committed by Mohammed Nuru and some other senior officials in our government."

Nuru, the former head of Public Works, was arrested by the FBI last year and indicted by federal prosecutors in what has developed into a wide-ranging corruption scandal.

Sherman resigned last September. Shortly thereafter, Breed announced that Human Resources Director Micki Callahan would be replaced by Isen while the search for a new director was undertaken.

"It has been a pleasure to serve the City and County of San Francisco for the last 15 years, and to work on many transformative initiatives such as pension reform, the implementation of implicit bias training, and our conviction history program," Callahan stated in a news release September 25. "Carol Isen is an excellent choice to serve as acting human resources director and is well suited to work with all city departments, labor partners, and community stakeholders to continue to keep San Francisco at the forefront of life-changing workforce policies."

A graduate of the University of Michigan Residential College, Isen earned a master of city planning degree from UC Berkeley.

Before working in government, she served as an organizer, negotiator, and associate director of the International Federation of Professional and Technical Engineers, Local 21 for a total period of 19 years.

"I want [to] thank Mayor Breed for moving forward Ms. Isen's appointment. She is honest, fair and a hard worker," Tavaglione stated. "We look forward to partnering with Ms. Isen on one of our top priorities — reforming [equal employment opportunity] policies and processes to better serve employees. City workers deserve fair and transparent leadership at the head of this important agency, Carol Isen is that leader."