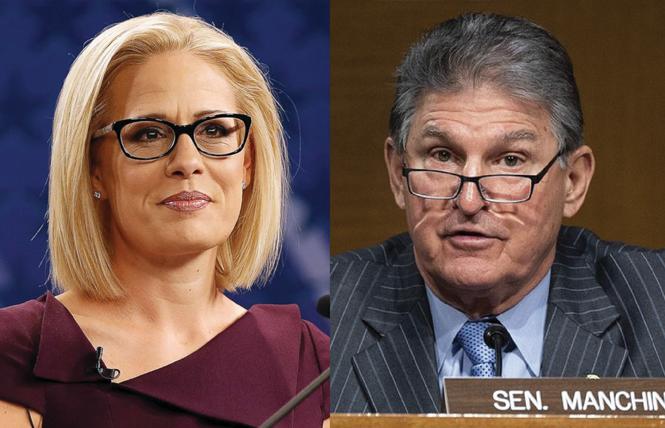 When the U.S. House of Representatives passed the Equality Act last week, it marked the second time the lower chamber had approved the sweeping legislation that would add sexual orientation and gender identity to the 1964 Civil Rights Act. There was never any doubt the House would pass the measure, as it had done in 2019. Both times the vote was bipartisan, although the February 25 vote only garnered three Republican lawmakers in support, fewer than the eight who joined Democrats two years ago. Nevertheless, proponents hailed its House passage. To believe that the act's approval is guaranteed in the Democratic-controlled Senate would be a mistake. Senate rules require 60 votes to end a filibuster on the legislation and that means at least 10 GOP senators would have to join all 50 Democratic senators. The possibility that Vice President Kamala Harris will be called upon to break a tie vote is not in play.

Two years ago, when Senator Mitch McConnell (R-Kentucky) led that chamber he wouldn't even hold a hearing on the Equality Act, much less put it up for a vote. Now that Senator Chuck Schumer (D-New York) is majority leader, odds are better for a hearing, but it doesn't change the math. Complicating the search for Republican allies, Senator Mitt Romney (R-Utah) has stated that he will oppose the Equality Act because there aren't significant religious liberty protections. The Washington Blade reported a couple of weeks ago that a possible strategy is to get rid of the filibuster rule, which some Democrats are clamoring for. But bi Senator Kyrsten Sinema (D-Arizona) and Senator Joe Manchin (D-West Virginia) said that they would vote to reject such a proposal, meaning it likely is dead. The Blade noted that Manchin's support for the Equality Act itself is uncertain, possibly meaning more than 10 GOP senators would have to sign on. As it stands, passing the Senate is a "heavy lift," as the Blade put it.

As appealing as getting rid of the legislative filibuster may be, it's unlikely to happen. (And, it's probably for the best, as the Democrats' majorities are razor-thin in the House and Senate and could evaporate after the 2022 midterms, meaning Republicans could pass laws detrimental to minority groups and others with a majority vote. Be careful what you wish for, as the saying goes.)

This maneuvering comes at a critical time for equality. After four years of the previous administration, the LGBTQ community finally has a supporter in President Joe Biden (and Harris, of course). We face discrimination in all areas of our lives (California's anti-discrimination laws are stronger than most other states). There are 29 states that haven't any non-discrimination protection, meaning that same-sex couples could get married in the morning and be evicted from their home or lose their jobs in the afternoon, as Senator Jeff Merkley (D-Oregon) put it during a news conference ahead of last week's House vote. Additionally, many states are now working to pass anti-LGBTQ laws, the latest being Montana. The Human Rights Campaign tweeted that it is tracking 128 such proposals across the country; that's scary, and should give senators pause if they try to wriggle their way out of holding a hearing. The Williams Institute, an LGBTQ think tank at UCLA School of Law, stated that the Equality Act would provide federal civil rights protections to 13 million LGBTQ people. "It would be especially beneficial to those living in places without state-level protections and to LGBT people of color, who are particularly vulnerable to poverty, food insecurity, and homelessness," stated Christy Mallory, legal director at the Williams Institute. In addition, Gallup reported last week that the percentage of Americans identifying as LGBT has increased to 5.6%, up from 4.4% in the polling firm's 2017 data. More than half of LGBT Americans identify as bisexual, Gallup's report stated. The bottom line is that as more Americans support equality, a growing percentage identify as LGBT, the report noted.

One option that most LGBTQs and progressives don't want to consider is amending the Equality Act to make it pass muster with Republican senators. We don't know exactly what that would look like, and it might be moot with a U.S. Supreme Court decision expected in Fulton v. City of Philadelphia. That case will determine whether a Catholic foster care agency has a First Amendment right to ban same-sex couples. "Although the conservative court may deliver a ruling against LGBTQ rights, observers have said the decision may let the air out of the religious liberty issue and allow additional Republicans to come aboard" supporting the Equality Act, the Blade reported.

Democratic senators should meet soon with LGBTQ leaders to chart a path forward that will get the Equality Act passed. Period. That may mean some uncomfortable compromises, but millions of lives are at stake, especially people of color and those who are gender-nonconforming. The Biden administration can only do so much, as we have seen. It takes the power of federal law to make a lasting change. And the Senate should probably wait for the high court's decision in Fulton before rushing a vote on the Equality Act that might end in failure. This would, of course, delay action on the bill, but the Senate is currently on course to betray the LGBTQ community again anyway. If we want the law passed, we may need to find an alternative to the current one to win enough votes.

Strategy talks in high gear to get Equality Act across the finish line
Sign up!