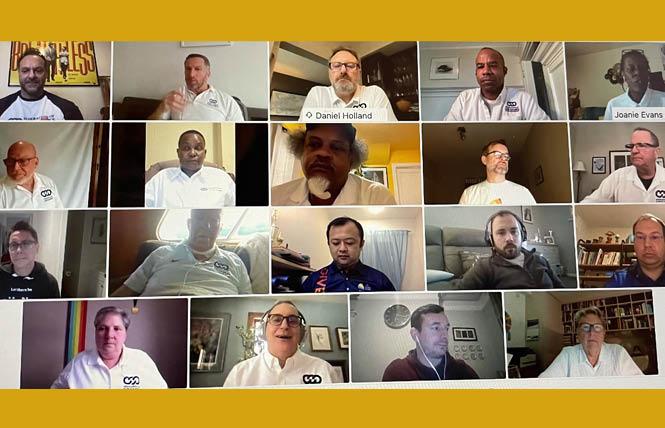 The Federation of Gay Games held its annual assembly virtually this year, with a focus on Gay Games XI in 2022 in Hong Kong. Photo: Screengrab

Organizers of the 2022 Gay Games in Hong Kong attending the Federation of Gay Games' annual assembly January 24 projected optimism that Gay Games XI will be held safely despite ongoing concerns about the effects of the pandemic, rocky international relations between the United States and China, and concerns over the increasingly restrictive control of Hong Kong by the Chinese government.

Organizers said they are working with the FGG in identifying "trigger points" along the way to decide whether to continue, initiate, delay, revise, or cancel planned pre-event actions, such as registration launch.

HK2022 co-chair Dennis Philipse said his organization was expecting 12,000 participants (which would make it one of the largest multisport events ever held) and more than 75,000 spectators.

FGG treasurer Mike Myers said his organization, which receives a portion of Gay Games registration and merchandise sales, was being "very conservative" in its revenue projections and was banking on just 6,000 registrants.

At the meeting, which was postponed from last November and held virtually because of the pandemic, HK2022 organizers fielded written questions from FGG member sports and cultural organizations.

Included were questions about the ability for athletes and artists to "be themselves" when in Hong Kong and what policy could they expect on registration fee refunds in the event that the Gay Games are canceled, delayed, or radically scaled down.

The first concern was a reaction to a portion of the HK2022 presentation in which delegates were told their athletes and artists should "avoid sensitive discussions," "not forget you are a guest here," "respect laws and culture" and avoid "kissing your boyfriend or girlfriend in public — that's just not done here."

The delegates were told that Hong Kong was gay-friendly, the laws in general and the new security law in particular do not target LGBTQ+ individuals and activities, and that public displays of affection are just not common in Hong Kong, although they are growing more routine with younger residents.

The second concern was an apparent response to the collapse of the 2017 World Outgames, which left hundreds of paid registrants out of luck financially, and the cancellation of the 2020 EuroGames because of the COVID-19 pandemic. With the EuroGames, registrants received partial refunds.

Hoekstra said organizers were working on identifying an insurer for Gay Games XI to help with registration refunds, and that the organization expected to be able to refund registration in full or almost full.

"If we need to cancel, it is our absolute priority to pay back registrants' fees," he said.

Registrants could also purchase travel insurance, said Hoekstra, and there would be no financial risks for people who sign up during pre-registration this spring. Paid registration is scheduled to open in June, but Hoekstra said pre-registration could be extended if circumstances warrant.

The FGG has taken a more organized approach to fundraising and sponsorship recruitment this quadrennial cycle than it has in past cycles. The federation in 2020 focused on identifying and signing major million-dollar or more, potentially long-term sponsors for HK2022, with a fraction of the money going to the FGG and the bulk going to the host organization.

Rick Peterson, past FGG co-president and current volunteer on the development committee, said three of those sponsorships were signed in December and would be announced at the start of the next calendar quarter.

Peterson said one of the platinum level sponsors was "one of the world's largest technology companies," one was in the active apparel industry, and one was in the hospitality and travel sector.

The FGG will now focus efforts on "mid-tier" sponsors in the $100,000-$500,000 range. Overall the FGG says it is trying to raise between $4 million and $5 million for Gay Games XI. The three top sponsorships already signed are more than the total corporate sponsorships for the 2018 Gay Games in Paris.

Other FGG news
In other FGG action, former San Francisco resident Charles King was named an Honorary Life Member. King, a tennis player, was a member of two Gay Games bidding organizations, served on the FGG Executive Committee, and was a longtime member of Team San Francisco. Also named an HLM was Annette Wachter, former head of Gay Games VIII in Cologne and an active site selection committee volunteer.

Small breakout groups discussed the eight bids the FGG is considering for Gay Games XII in 2026. Delegates and board members will use ranked-choice voting January 31 to cut the list of bidders to three.

Site visit evaluations are scheduled to be made this summer. Delegates and board will selective the presumptive host when the next assembly is held. That is scheduled for Hong Kong this November.