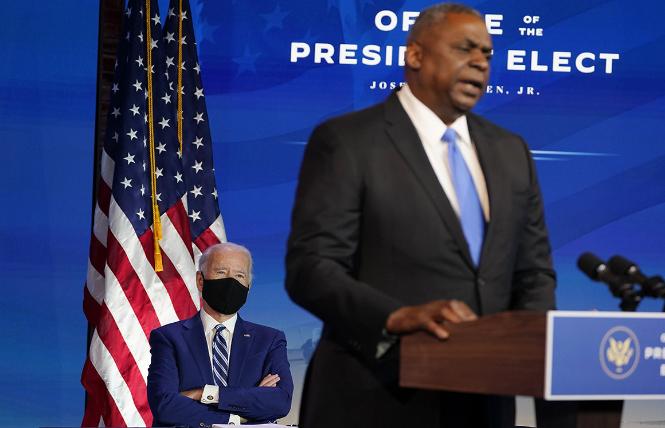 Retired General Lloyd Austin, shown here after President Joe Biden nominated him to be defense secretary, was on board with Biden's executive order repealing the transgender military ban. Photo: AP

President Joe Biden on Monday signed an executive order repealing the ban on transgender troops serving in the military.

The January 25 action was announced by the White House shortly before the ceremonial swearing in of Defense Secretary Lloyd Austin, Politico reported. Austin had supported the repeal of the ban, which was put into effect by former President Donald Trump.

"I truly believe ... that if you're fit and you're qualified to serve and you can maintain the standards, you should be allowed to serve," Austin told lawmakers during his confirmation hearing.

"President Biden believes that gender identity should not be a bar to military service, and that America's strength is found in its diversity," a fact sheet from the White House noted.

"This question of how to enable all qualified Americans to serve in the military is easily answered by recognizing our core values," the administration stated. "America is stronger, at home and around the world, when it is inclusive. The military is no exception. Allowing all qualified Americans to serve their country in uniform is better for the military and better for the country because an inclusive force is a more effective force. Simply put, it's the right thing to do and is in our national interest."

"Today, those who believe in fact-based public policy and a strong, smart national defense have reason to be proud," stated Aaron Belkin, a gay man who's director of the Palm Center, a think tank that studies LGBTQ military issues. "The Biden administration has made good on its pledge to put military readiness above political expediency by restoring inclusive policy for transgender troops.

"The ban will now be replaced with a single standard for everyone that, as in the successful previous policy, will apply equally to all service members," Belkin added. "This is a major step in the defense not only of America but of American values. We look forward to a speedy implementation of inclusive policy."

"This is a significant and hopeful moment for our country. Over the last three years, we've fought to prove that transgender people are not a burden, a hindrance, or a distraction — we are an equal and contributing part of this society just as much as any other group, and this development vindicates that basic principle," Staff Sergeant Cathrine (Katie) Schmid, a trans woman and 15-year active servicemember of the U.S. Army, stated in a Lambda Legal release. "This isn't simply about our place in the military, or my place in my unit. It's about our right to be treated as co-equal members of society. This harmful and backwards policy will now be put where it belongs: in a very short, shameful chapter of U.S. military history."

Equality California and other groups were involved in another lawsuit challenging Trump's ban.

GLBTQ Legal Advocates & Defenders and the National Center for Lesbian Rights filed the first legal challenge, Doe v. Trump, in August 2017 and joined Latham & Watkins, LLP in filing a second lawsuit, Stockman v. Trump, on behalf of Equality California and seven transgender servicemembers and recruits the following month. GLAD and NCLR anticipate a swift resolution of all pending lawsuits opposing the ban with the issuance of today's order.

"It is my highest goal to serve my country in the U.S. military and I've fought this ban because I know that I am qualified to serve," said Nicolas Talbott, an aspiring service member who is a plaintiff in Stockman v. Trump, stated in a release from EQCA, GLAD, and NCLR. "I'm thrilled and relieved that I and other transgender Americans can now be evaluated solely on our ability to meet military standards. I look forward to becoming the best service member I can be."

San Francisco Mayor London Breed and the city's Office of Transgender Initiatives praised the president's actions on both the trans military ban and his executive order last week to prevent and combat discrimination based on sexual orientation and gender identity that he issued his first day in office.

"President Biden's executive orders affirm the value and contribution of transgender, gender-nonconforming, and LGBQ Americans who have served or want to serve our country. Today's announcement gives us hope for the opportunities ahead to make our country safer and more just for all," stated Clair Farley, a trans woman and senior adviser to Breed and director of the San Francisco Office of Transgender Initiatives.

Experts say implementation of the Biden policy change should occur quickly. As the Palm Center has shown in a recent memo, the Pentagon has everything in place to end the ban in a matter of weeks. The memo explains that the necessary guidance "already exists in current" military policy because the Pentagon had to leave regulations in place to govern grandfathered transgender troops under Trump's ban. As a result, even as it reinstated the ban, DoD "left all the necessary breadcrumbs to mark the way back to inclusive service," the Palm Center noted.

Updated, 1/25/21: This article has been updated with comments from the San Francisco Office of Transgender Initiatives.

Biden names OutRight's Stern as US special envoy for LGBTQI rights
Sign up!