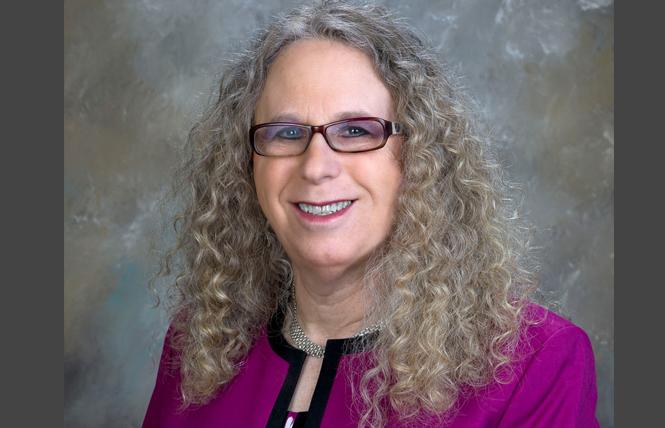 The Senate this week finally started holding hearings for President Joe Biden's various cabinet nominees and others that need confirmation. One who must be confirmed immediately is Dr. Rachel Levine, a transgender woman whom Biden tapped as the number 3 official in the Department of Health and Human Services. Levine, secretary of health for the Commonwealth of Pennsylvania, has garnered praise for how she has led her state's response to the COVID-19 pandemic. Now that Biden has designated her as assistant secretary for health at HHS, she needs to be speedily confirmed so that she can help lead the nation's response to the health crisis in the new administration.

According to Biden's transition team, Levine was confirmed three times by the Republican-controlled Pennsylvania state Senate to serve as health secretary and the Commonwealth's physician general. She is poised to become the first openly trans official to be confirmed by the U.S. Senate. "Dr. Rachel Levine will bring the steady leadership and essential expertise we need to get people through the pandemic — no matter their ZIP code, race, religion, sexual orientation, gender identity, or disability — and meet the public health needs of our country in this critical moment and beyond," Biden stated. "She is a historic and deeply qualified choice to help lead our administration's health efforts."

Levine, 64, is also a professor of pediatrics and psychiatry at the Penn State College of Medicine. She is president of the Association of State and Territorial Health Officials and a fellow of the American Academy of Pediatrics, the Society for Adolescent Health and Medicine, and the Academy of Eating Disorders. Levine graduated from Harvard College and the Tulane University School of Medicine in New Orleans. She completed her training in pediatrics and adolescent medicine at the Mt. Sinai Medical Center in New York City.

In short, Levine is qualified for the federal post and will be able to guide HHS in all manner of health issues. Given that Biden has nominated California Attorney General Xavier Becerra as HHS secretary, Levine's medical experience will be an asset that he can rely on. Becerra is an inspired choice to lead the agency because he will undoubtedly deal with myriad legal issues at HHS to reverse the numerous hideous anti-LGBTQ policies enacted by the Trump administration. Having a physician in a top HHS post is critical, not only for the pandemic, but also other health-related issues.

The National Coalition of LGBT Health congratulated Levine, noting that she has been an integral supporter of LGBTQ health by working to reduce health disparities and expand access to care and prevention. "Dr. Levine has raised awareness about the disproportionate impact of mental health on the LGBTQ community," said the coalition's Executive Director Brian Hujdich. "She has further helped expand protections for the community by working with various departments in the Commonwealth to ensure inclusivity and greater health coverage. Dr. Levine also has focused on the needs of marginalized populations throughout the ongoing opioid crisis."

The Los Angeles LGBT Center stated that Levine's appointment "would bring a significant and desperately needed focus on access to health care for transgender people."

We join with the LA Center in condemning anti-LGBTQ conservatives who are expected to undermine and pillory Levine simply because she is transgender. That red herring should be forcefully denounced at every level. Inclusivity is key to healing the nation and reflects the true diversity of our country. Health care should be available to everyone, and Levine's nomination is a powerful signal that Biden recognizes that; the Senate must too.