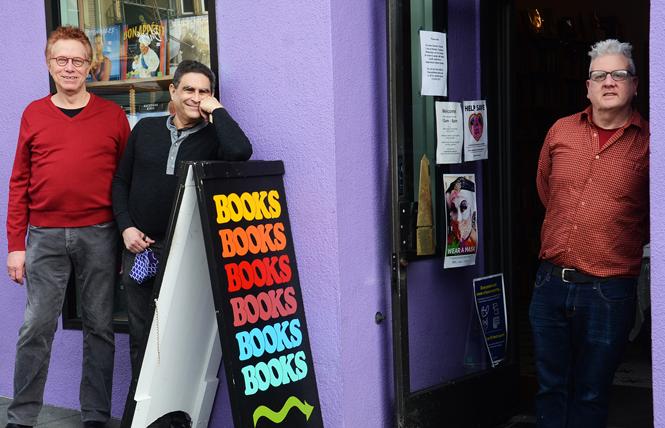 As a monthly queer reading series marks its fifth anniversary of spotlighting out authors, the LGBTQ bookstore that hosts it in San Francisco's Castro district is facing an uncertain future due to the COVID pandemic.

Since founders and life partners Wayne Goodman and Rick May launched their Perfectly Queer reading series five years ago this month, they have aimed to connect LGBTQ novelists and poets not only with the reading public but also to locally-owned bookstores in the Bay Area. When the initial host of their event, Books Inc., closed its Castro location in the summer of 2016, the couple ended up relocating it to the newly opened second location of Dog Eared Books.

The lesbian-owned bookseller that year had moved into the vacated clothing store space at 489 Castro Street. The storefront had previously been the home of beloved LGBTQ-focused A Different Light Bookstore from 1986-2011. Goodman and May, who began dating in 2013, were thrilled at being based out of such a historic location in the heart of one of the world's most important LGBTQ neighborhoods.

"Most of our authors who read with us, a lot of times they've never read in a bookstore before or their readings are not held in bookstores," noted May, 74, who has had a long career in the publishing field. "They are thrilled to see their books in a bookstore."

Returning for the virtual anniversary celebration January 20, having taken part in the very first Perfectly Queer event, is Oakland-based poet Natasha Dennerstein, 60, a transgender woman from Australia who relocated to the Bay Area in 2013 when she enrolled at San Francisco State University to earn her MFA. A literary editor with Nomadic Press, Dennerstein collaborated with Los Angeles-based painter Kaye Freeman for her latest book of poetry, "Turn and Face the Strange," which came out in 2019.

"I am very happy it has lasted this long. I am involved in the literary scene and there wasn't a lot of specific rewards and events for LGBTQ writers back then. It filled the void that really needed filling because there are a lot of us," said Dennerstein, who works as a housing navigator for St. James Infirmary, which provides medical, mental health, and social services to San Francisco's sex workers and their families.

The same was true when Dog Eared opened just as Books Inc. closed in the Castro, added Dennerstein, as having no LGBTQ bookstore would have been a "bad omen" for the future of the prominent queer cultural district.

"I think it is important for a marginalized community to have a focal point where the culture of that community is celebrated," said Dennerstein. "You can drop in to Dog Eared Books' sections of gay fiction and lesbian fiction and writings on trans and gender-nonconforming folks."

The Perfectly Queer reading series routinely attracted 40 people or more to the store, with half of the audience purchasing one of the works of the featured authors, May told the B.A.R. in a phone interview this month. Then the COVID-19 virus emerged last winter leading to the cancellation of the March event.

It wouldn't be until September that Goodman and May would host the first virtual Perfectly Queer reading event. Each month since they have brought together queer authors and readers for the online sessions, which now attract a global audience.

"It was nice to have a little break, but then I started feeling guilty. People said, 'I miss having readings,' and the authors wanted to do the readings," recalled May, who for 30 years has called the city's Noe Valley neighborhood home and has organized its yearly Book Week event for 15 years, though last year's had to be canceled due to the health crisis.

An Army veteran who grew up in Sacramento and earned a master's in English at the University of Southern California, May moved to New York City and landed a job as an editor at Doubleday. He worked for several publishing houses in the 1980s before moving to San Francisco toward the end of the decade.

May sold children's books to Bay Area schools and libraries, eventually forming his own company to work with publishers of such titles. He turned the business over to his employees when he took a position in 2003 as director of sales for Continuing Education of the Bar, the University of California's legal publisher.

In 2012, May teamed with photographer David Sweet to publish the book "Ginger Snaps," photos and stories about queer red heads like himself. His most recent book was "Gay All Year," a collection of stories for each month of the year.

Goodman, 64, relocated from Philadelphia to the Bay Area with his family at the age of 10. In 1980, he moved to San Francisco and worked for a law firm, later becoming a registered nurse. In 2000, Goodman moved in with a previous boyfriend in Vallejo and has called the East Bay city home ever since.

An author of 10 self-published books, Goodman hosts the Queer Word podcast and talks to his guests from around the globe about queerness. He recently learned the Library of Congress will archive his podcast series in its LGBTQ+ digital collection.

Goodman and May elected to use queer in the name of their reading series, despite the word's negative connotations among their age group, since it is an umbrella term that encompasses all of the LGBTQ community.

"We went for the pun perfectly clear and said let's make it Perfectly Queer," explained Goodman.

In addition to the San Francisco events, the couple held readings in the East Bay between 2015 and 2017 at three different bookstores as each were forced to close their doors.

"We keep picking bookstores that close. I hope it doesn't happen to Dog Eared," said Goodman.

Bookstore faces uncertain future
It is unclear when they will be able to host live readings again, as the pandemic is still raging across California. Businesses like bookstores are operating under restrictive guidelines that limit how many customers they can admit in at one time.

Meanwhile, Dog Eared Books is facing an uncertain future of its own. Last year, it was forced to close between March and June, during which time it worked on creating an online platform for sales.

"For the first time in four years of operation, our very survival is at stake," wrote owner Kate Rosenberger. "Going out of business would make four dedicated booksellers unemployed and turn the Castro into a book desert, the sort of sad place where one can feed one's stomach but not one's mind."

Before helping to open the Castro location, store manager Alvin Orloff worked at Dog Eared Books' first location on Valencia Street in the city's Mission district. With the Castro lease coming up for renewal this May, Orloff told the B.A.R. that the bookstore is exploring its options, from extending its lease to a possible sale to new owners.

"We will do what it takes because the Castro deserves a bookstore," he said. "We are hoping we can reconfigure the business in some way. It is probably going to change hands in some form or fashion; we don't know how."

"December was really heartening. Our customers really came through for us," he said.

Nonetheless, it couldn't make up for the previous "terrible" months, Orloff added, when there were so few shoppers staff never worried about hitting capacity.

"It was a huge hit and the business is not really back to normal. We are struggling," said Orloff, 59, a gay man who has worked for the bookseller for 21 years.

He told the B.A.R. the store is looking at making a public appeal for financial support in the coming weeks. Selling online is "no panacea," said Orloff, so the staff is hopeful they can find a solution that keeps the Castro location's doors open.

Other than the GLBT History Museum and the Castro Theatre there aren't many cultural options left in the Castro, noted Orloff, apart from the drag shows the neighborhood bars hosted.

"We are still assessing the economic situation. We are going to have to make some big changes in order to keep the store open," said Orloff. "We are a neighborhood bookstore where people can feel the books and talk about books with their neighbors and staff. It is really important for the Castro to have that, as there isn't much to do other than go to the bars and restaurants."

It is why the store has partnered with the Perfectly Queer reading series, noted Orloff, for so many years. It did so not so much to boost sales but to support authors, he explained, many of which are local and customers.

"It is an important part of the culture in general to have live events. I don't think you can really replicate the experience online, sadly," said Orloff, who read from his own memoir published in 2019 at one of the virtual queer reading events. "The online experience, it is better than nothing. Nothing really replaces hanging out with people."

Perfectly Queer's anniversary celebration will take place from 7 to 8:30 p.m. Wednesday, January 20. Five LGBTQ+ authors are returning to read from their work, and there will be games and prizes for attendees of the free event.

To request the Zoom link to join in, email perfectlyqueersf@gmail.com or RSVP on the reading series' Facebook event page.

Postscript
When I took over the business column in May 2014, I inherited its name of "Business Briefs" reflecting that it had served as a roundup on various news items, from store openings and closings in the Castro district to the hiring of LGBTQ people to important jobs. Over time, I have refocused the column to delve into specific business issues or profile out business owners. Thus, the first column of 2021 bears a slight update to its name to signal that it is a monthly "Business Briefing." 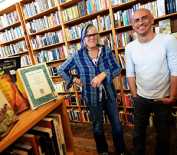 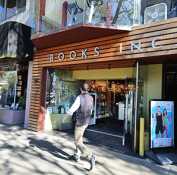