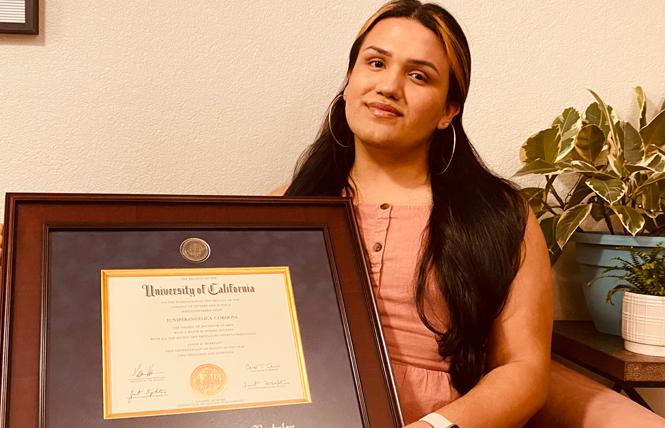 For a year UC Berkeley graduate Juniperangelica Cordova's original diploma sat on a bookshelf in her Alameda home wrapped in the envelope it arrived in. Seeing it on a daily basis would have been too upsetting for the Los Angeles native who came out as transgender while in high school at the age of 15.

The East Bay university had used Cordova's deadname on the document it issued to her in late 2019 rather than her lived name. After raising a complaint with campus administrators about the mix-up, Cordova received a new diploma with her correct name on it in late November. She promptly had it framed and hung it prominently on a wall at her home.

"That moment was what I had been working my whole life for," said Cordova, 24, who is a senior organizer of the Gender Justice Leadership Programs, a collaboration between the Transgender Law Center and GSA Network. "It was great. It was what I had always wanted and didn't get the first time when I opened the envelope to see my deadname. I was crushed the first time."

To ensure no other graduates of California's community colleges and public universities experience the same crestfallen moment as Cordova did, Assemblyman David Chiu (D-San Francisco) is reintroducing his bill known as the Affirming Transgender and Nonbinary Student's Names in College. He had introduced the legislation last January but had to table it in light of the COVID pandemic.

In an interview Tuesday with the Bay Area Reporter, as the health crisis continues to rage across the Golden State, Chiu noted the diploma issue is just one of myriad concerns he is focused on this year in the Statehouse. With the pandemic impacting people's employment, Chiu pointed out that trans and nonbinary graduates seeking new jobs may be outed to employers and face discrimination if their academic records list their wrong name.

"A college diploma is their representation of years of hard work and academic achievement. It shouldn't cause stress or emotional harm by having someone's deadname on it due to outdated school policies," said Chiu. "Trans and nonbinary people face lots of discrimination; the name on their diploma should not be another thing to worry about. This is a no-brainer. People should be able to access their student records with their correct name."

Chiu previously authored Assembly Bill 711 that became law last year and requires public K-12 schools in the state to update the records for transgender and nonbinary students so that they match their legal name and gender identity. His bill applying to the state's public institutions of higher learning, AB 245, would allow college students to have their lived name printed on their college diploma and transcripts even if they have not gone to court to legally change their name given to them at birth.

"For so many reasons young folks don't have the resources or desire to change their legal name. It is why being able to use your chosen name is so important," said Cordova, who told the B.A.R. she has yet to legally change her name.

Chiu's legislation would set a standardized process for officials at the higher education schools to use when former students seek to have their educational records updated and reissued with a different name. The bill sets out to clarify the types of identification that transgender or nonbinary alumni would need to provide in order to have the correct name updated in their records and have diplomas or transcripts reissued.

Equality California, the statewide LGBTQ advocacy organization, is again sponsoring the bill, as are a number of college student associations. Chiu told the B.A.R. this week he is in talks with representatives from community colleges, the UC system, and the state university system about their supporting his bill. In November, the UC system released a new policy on gender identity that all of its campuses will need to implement by December 31, 2023.

"Gender identity is fundamentally personal, and the University of California should ensure that all individuals have university-issued identification documents and displays of personal identification information that recognize their accurate gender identity and lived name (first name, middle name and/or last name or surname)," states the policy.

Under the directive anyone with an existing academic or professional relationship with the UC system "must — through a clear and efficient process — be permitted to amend" their university records to reflect their gender identity and lived name. All UC locations "should avoid passing on the cost" to the person for updating their records or issuing new identification cards, states the policy.

The policy clarifies that the use of lived student names can be used on "eligible academic documents" like transcripts, diplomas, and dissertation title pages. But it also notes that a person's legal name will need to be used on certain records such as financial aid documents, payroll and medical records, federal immigration documents, and tax forms.

As the B.A.R. noted last year, City College of San Francisco has implemented a chosen name system for its trans and nonbinary students and staff. Under its gender diversity and inclusion policy the use of chosen names are mandatory except for certain financial and legal documents.

Cordova, who earned a B.A. in ethnic studies, has yet to seek any other academic records from UC Berkeley and told the B.A.R. she is uncertain what name would appear on them. She is optimistic that state lawmakers will pass Chiu's bill this year so deadnaming of college students is banned at all public universities across the state.

"I think it is always the right time to prioritize the experiences of trans people and really to work to end all of these expected and preventable moments of harm that we experience as a community," she said.