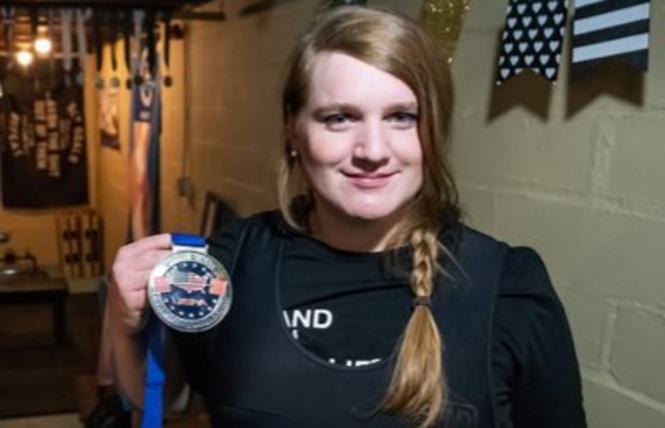 Transgender powerlifter JayCee Cooper of Minnesota has filed a discrimination lawsuit against USA Powerlifting and the association's state chapter, alleging its policies preventing transgender women from competition are contrary to state anti-discrimination law and the guidelines of international powerlifting itself.

"Trans athletes across the country deserve the same rights and protections as everyone else, and we deserve equitable opportunities to compete in the sports we love," Cooper said when announcing the lawsuit Tuesday, January 12. "I jumped through every hoop, cleared every hurdle to be able to compete with USA Powerlifting, but was met with a retroactive ban on trans athletes. I'm going to fight as hard as I can to ensure that every trans athlete has the opportunity to compete and be recognized with full dignity and humanity."

USAPL could not be reached for comment at press time.

The suit, filed in the state's second district court, which serves Ramsey County, stems from USAPL's decision to revoke Cooper's competition card in late 2018, which prevented her from entering competition in early 2019. Cooper is represented by human rights group Gender Justice and co-counsel Nichols Kaster.

At a news conference Tuesday announcing the lawsuit, Gender Justice advocacy director Erin Maye Quade said barring participation by transgender women hurts women's sports as a whole by distracting attention from pressing problems such as sexism, racism, and sexual predation; and "creating problems where there are none."

Cooper said she had applied for a therapeutic use exemption, or TUE, for spironolactone, a testosterone-suppressing medication used in her medical maintenance care. Spironolactone is abused by some athletes as a "masking" agent to hide illicit use of performance enhancing drugs, but the World Anti-Doping Association protocols allow use exemptions for spironolactone, testosterone, and other medications for legitimate health reasons in transgender athletes. Various international athletic associations, including International Powerlifting Federation, set the amounts of the medications allowable for their sports.

USAPL flatly bars transgender women from competing in the women's division and does not grant testosterone TUEs for any purpose. Those two policies effectively prevent all American transgender powerlifters from competing for spots in the world championships.

"It came as a surprise to me when it was told to me I could not compete specifically because I was a trans woman," Cooper said.

Cooper said previously in the powerlifting community she had found "love and community around the sport."

"I grew up pursuing Olympic dreams in curling," she added. "I don't want anyone to experience what I and other trans athletes have experienced. We all benefit when sports are inclusive as possible. Women should be able to participate at every level and that includes trans women. Sports belong to all people. Sports are a human right."

After Cooper was barred from competition, she filed an appeal with USAPL, which was denied. (See, May 16, 2019 Jock Talk, "Fallout continues over gender-binary wars". She then filed a complaint with the Minnesota Department of Human Rights on June 13, 2019 against USAPL, followed by an accompanying complaint against USAPL Minnesota on November 6, 2019.

No resolution has come out of those complaints.

"With today's decision, USA Powerlifting has found yet another way to discriminate against transgender, gender nonbinary, and gender-nonconforming (TNBGNC) athletes," Jess Braverman, legal director for Gender Equality, said at the time.

The lawsuit expands on that objection.

"USAPL will continue to bar from competition transgender men who take testosterone as part of their medically necessary gender affirming care. It is unclear how USAPL will address TUEs from transgender women who require one, due to the use of spironolactone or other related medications, in order to be cleared for competition," the suit states. "Transgender women are still categorically barred from competing in the women's division."