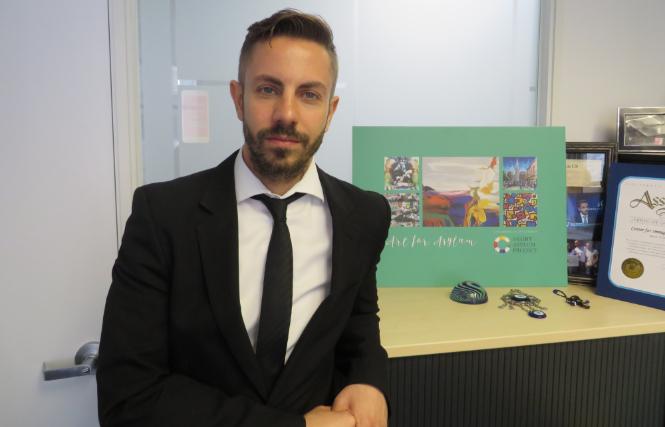 The Bay Area Reporter received the announcement in a Facebook message on Monday.

The San Francisco LGBTQ immigration attorney introduced the channel, telling his own immigration story, his pathway to becoming a United States citizen, and working as a human rights activist.

Sengun, 36, plans to highlight LGBTQ issues around the world.

"I won't be scared to discuss human rights abuses and which governments are oppressing different minorities, including LGBTQ people," he said.

He also said in the video that he will focus on immigrants who have found success in the U.S. and nonprofit organizations' life-saving work.

Sengun left Turkey, his home country, for the U.S. more than a decade ago.

"I knew I could never live as an openly gay man in Turkey," he said.

Sengun realized through his own journey the lack of family and community support that many LGBTQ asylum seekers and refugees face seeking citizenship.

"That's why I've become so passionate about helping other immigrants like me," he said.

In 2013, Sengun opened the Law Office of Okan Sengun. In 2016, he co-founded the LGBT Asylum Project with LGBTQ ally Brooke Westling.

Since then, he has helped hundreds of LGBTQ immigrants gain U.S. citizenship.

The channel is produced by the Okan Media Group.

To watch the first episode:

China cracks down on the country's 'gay capital'
Last October, Chinese authorities started to clamp down on Chengdu, a longtime beacon for LGBTQs dubbed "Gaydu" by millennials.

The southwestern Chinese city has a vibrant LGBTQ community in a country that has fought against the queer community, censoring traditional and online media, and denying rights despite decriminalizing homosexuality in 1997.

Harassment and stigma against LGBTQ people are widespread in China despite some progress.

Agence France Presse only recently reported news of the crackdown.

"People here generally don't care what your sexual orientation is," Matthew, an activist at Chengdu Rainbow who only was identified by his first name, told AFP.

AFP reported the city gained the attention of Beijing and local officials in 2020. LGBTQ domestic travel increased to the city during the global COVID-19 pandemic though international travel was restricted. Then a spike in HIV infections was linked to alleged sex parties at the city's MC Club's sauna and explicit photos circulated online.

The club was popular, attracting upward of 1,000 clubgoers a night in the city of 16 million.

Authorities closed MC Club in October, but that appeared to be the beginning of the crackdown on the city's LGBTQ community, gay activists told AFP.

Gay bars throughout the city were temporarily shut down, reportedly to control the health crisis, but then authorities began investigating the city's LGBTQ organizations, an unidentified activist told AFP.

Going back into the closet is not an option for Chengdu's LGBTQ community.

"There is some tacit acceptance by the authorities, but it is very delicate," he said, stating the community makes incremental progress rather than a show of big political and social statements.

The green party proposed its bill in June 2020. The Free Democratic Party followed soon after with its own plan.

"I really see German legislation as too conservative at the moment," said transgender activist Felicia Rolletschke, 26, who has been fighting to reform the transsexual law for years.

The Berlin-based workshop leader and public speaker moved to Germany's capital city when she was 17 years old to attend university, leaving behind her "very Catholic" Bavarian village of 4,000 people and at 21 coming out as transgender, she told DW.

Her transition took more than two years and thousands of dollars, she said, calling the hurdles to legally identify in the gender with which she identifies as too high in cost, time, and psychologically.

German lawmakers discussed the bills in a special hearing in the parliament with a panel of experts in November.

Lawmakers overwhelmingly agreed the transsexual law needed to be reformed but faced some opposition.

Alexander Korte expressed concern regarding setting the minimum age at 14.

The Munich-based child psychologist told German broadcaster Deutschlandfunk that "girls are often clearly uncomfortable with their own bodies at the start of puberty," reported DW.

This is not the first reform proposed. Through the years the law has been amended to remove infertility and evidence of surgery requirements in order for people to legally change their gender. In 2017, Germany legally recognized a third gender on government forms.

Reforming the law would bring Germany in line with the Council of Europe's 2015 ruling to introduce self-determination for transgender people. Germany would join Belgium, Denmark, Iceland, Ireland, Luxembourg, Malta, Norway, Portugal, and Sweden in allowing transgender people to legally self-recognize their gender.

"Just talking about changing this archaic law is a step in the right generation," she said. "I hope it will work, but I am not too optimistic."

Mitsotakis reshuffled his cabinet members January 4, according to the Greek Reporter.

Yatromanolakis, 45, will work under the direction of Lina Mendoni, who retained her post in the Culture and Sports Ministry.

The Mediterranean country has increasingly embraced its LGBTQ community in recent years. However, LGBTQ Greeks continue to face some discrimination.

Yatromanolakis served as chief marketing and communication officer of the Stavros Niarchos Foundation Cultural Center from 2017 to 2019.

The Greek Reporter noted that Yatromanolakis, an award-winning human rights and LGBTQ advocate, has held a number of executive positions in business, nongovernmental, and politics. Those include stints at Microsoft, the Hellenic Foundation of European and Foreign Policy and the Potami Party, which he left in 2016.

Yatromanolakis was born in Greece's capital city, Athens, in 1975. He obtained a master's in public policy from Harvard University's John F. Kennedy School of Government.

Change-makers: The Lavender Tube on 'Equalizer,' 'Clarice,' and Christopher Plummer remembered
Sign up!