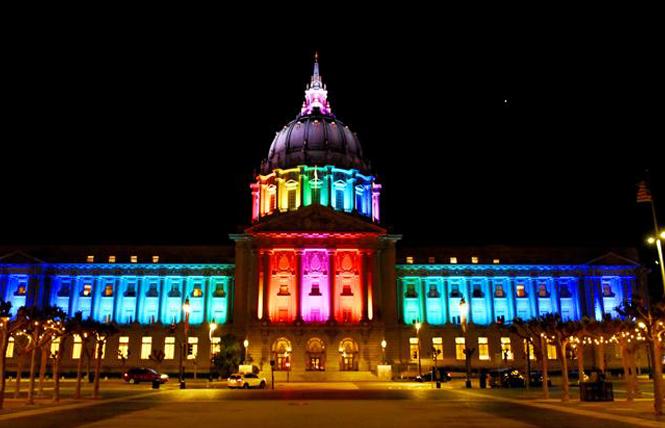 Three years after it went on hiatus due to months of lacking the quorum needed for meetings, the San Francisco Human Rights Commission's LGBTQI Advisory Committee will relaunch in 2021 under a new membership structure. Recruitment of community members interested in serving on it will begin in February, with the first meeting expected to take place in the spring ahead of Pride Month.

It will mark "the relaunch, rebrand, and really the reigniting of the LGBTQI Advisory committee," noted HRC Executive Director Sheryl Davis.

First established in 1975, the committee is tasked with advising the HRC on issues affecting the LGBTQ community. Among its more recent accomplishments, the panel played a part in the creation of the city's LGBT Aging Policy Task Force, which produced policy proposals instituted at both the city and state level, and making gender identity a protected category in San Francisco, similar to race, age, and sex.

The committee's 12 members were expected to meet monthly except for December, due to the holidays, and June, in recognition of Pride Month. Members had to be city residents and were not paid for their service. But in October 2018 the Bay Area Reporter disclosed that the advisory panel's last meeting had been in March of that year.

A HRC spokesman chalked up the reason for the panel going dormant to the city agency having to follow more rigid rules and regulations on how it conducts its meetings than what community-based LGBTQ organizations have to follow. At the time Susan Belinda Christian, a lesbian then serving on the HRC, had told the B.A.R. that the advisory panel should be re-envisioned so that it worked closer with the full commission, the city's LGBTQ residents, nonprofits, and other queer organizations.

And in fact, that is what has occurred under a reimagining of the panel that was adopted by the HRC in August 2019. Under the advisory committee's revamped makeup, it will be expanded to have 25 members. There will be 10 seats dedicated for community members, five seats for elected officials, and 10 seats for the executive directors of city-based LGBTQ nonprofits and social service agencies.

"We decided to update the bylaws to ensure that we have a diversity of voices included in the new advisory committee. Having a body that includes elected officials, executive directors, and community members provides the opportunity to advance advocacy, policy, and funding opportunities," explained Tuquan Harrison, the HRC's LGBTQI policy adviser. "We want to ensure the LGBTQI Advisory Committee's reach and impact are deeply embedded in all parts of San Francisco's LGBTQI community."

Delayed by pandemic
Implementation of the revised LGBTQI advisory body, however, was delayed due to the COVID-19 pandemic, said Harrison, who will serve as the agency's liaison to the committee. HRC staff had met with LGBTQ community members and leaders last March right before the health crisis led to stay-at-home orders being instituted that month.

"We were planning for the relaunch of it, but it never happened due to COVID," said Harrison, adding that Davis "really wants this body to come back to the city. In the new year we will make sure it is launched."

Harrison told the B.A.R. that the city department plans to meet with different community members this month to update them on what the next steps are for reconstituting the advisory panel.

"We will be hosting our announcement meeting in early February to begin the advisory recruitment process. We will have a formal application process and should have more details in the coming weeks," Harrison informed the B.A.R. in early December.

The advisory committee will only need to meet at least quarterly, rather than requiring that it meet 10 times a year. The political leaders and agency heads given seats will be able to name proxies who can take part in meetings on their behalf.

"I think that makes a lot of sense," gay District 8 Supervisor Rafael Mandelman told the B.A.R. about the reconstituted makeup of the committee.

In presenting the revised timeline for getting the panel up and running at the HRC's November meeting, Vice Chair Joseph Sweiss told his fellow commissioners that, "I personally like to think of this as the LGBTQI commission" for the city that can weigh in on citywide directives, provide guidance to city leaders on LGBTQ initiatives, and highlight funding and grant opportunities for community groups.

"I know this is a bold vision. I know we are asking for a lot," he said. "We are shooting for the stars. But that is exactly what we do in San Francisco."

Sweiss, a queer man who works on policy and public affairs at the city's Department of the Environment, has taken a lead role in revising the advisory panel along with Harrison and fellow out commissioners Melanie Ampon, a trans woman who is a longtime employee of the transgender cabaret dining club AsiaSF, and Mark Kelleher, an organizational development consultant with the firm BroderickHaight Consulting. Formerly an associate vice president of development at San Francisco State University, he is married to the city's treasurer-tax collector, José Cisneros.

Sweiss described the new makeup for it as "the United Nations model" for San Francisco's LGBTQ community.

"We wanted to figure out a body that is always diverse, inclusive, and has room for everybody who wants to be involved," said Sweiss.

Ampon said at the meeting that she was "excited" to see the city have a forum that brings together public officials, grassroots organizations, and community leaders on a regular basis.

"I am really excited to see what we can do and how we can elevate community leaders and grassroots organizations," said Ampon. "Hopefully, we can do some real good in San Francisco."

Kelleher said he believes the new model for the advisory panel will produce a "really useful partner going forward" as the city grapples with the various challenges confronting its LGBTQ residents.

Mandelman said the panel is needed not only to address such topics as how to assist more LGBTQ people get elected or appointed to positions in the city but also to provide a forum for the city's various LGBTQ nonprofits to confer with one another and collaborate better on issues.

"It is a place to cultivate a new generation of leadership," said Mandelman, currently the lone out member on the Board of Supervisors. "It is also a place for, I think, this vision to have queer nonprofits get together around a table on some regular basis to talk about issues of concern to the community. I think it could only be to the good."

Michael Nguyen, a gay attorney who chairs GAPA, a social club and political group for queer Asian and Pacific Islanders, attended the March 2020 meeting about the advisory panel revamp and believes the new vision for it will attract more interest in serving on it.

"I think it is good to have community members, agency CEOs and nonprofit leaders interacting with elected officials. It will make it more attractive to serve on that committee," said Nguyen. "Hopefully, it becomes more productive and more functional. I think I definitely want to apply to serve on it."

HRC Chair James Loduca, a gay man who leads global diversity and inclusion at Twitter, said at the commission's November meeting that through the work of the advisory committee, "We can make sure we continue to be the beacon for young LGBTQ people around the world."

UPDATED 1/7/2021 to correct Mark Kelleher's current job due to incorrect information included in his bio on the HRC website.