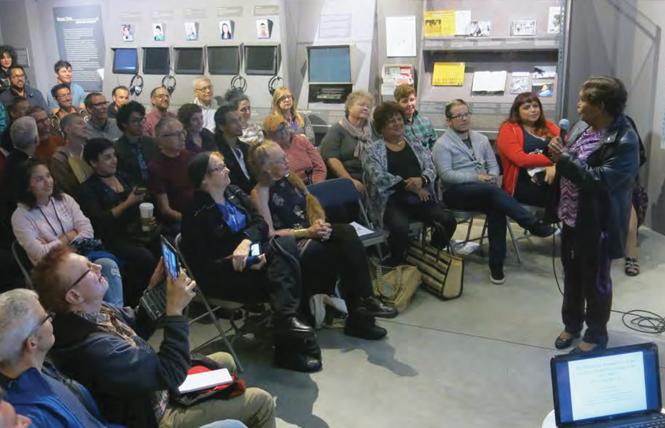 The San Francisco Board of Supervisors' lone LGBTQ member plans to request a hearing be held this year on the city's plan to preserve its LGBTQ cultural heritage.

Other than being taken up by the city's historic preservation commission in the fall of 2018, there has yet to be a public hearing about the final version of the strategy before any city oversight panels or a supervisors' committee. The planning department, whose staff helped shepherd its creation, considers the document to now be finalized with its publication online in August.

Throughout the fall and winter a spokeswoman for the planning department had told the Bay Area Reporter the agency was awaiting further instructions from the city's elected leaders on how they wanted to move forward with the document. In an interview last month, Mandelman told the B.A.R. he would make the formal request that city planners present the cultural strategy to the board.

"I think we will be scheduling that for early spring," said Mandelman, adding that such a presentation was needed not only to gather public feedback on the various proposals called for in the strategy but also to thank those who helped write it. "I think a lot of people have done a lot of work on it and there are some important ideas in there."

The supervisors will meet Friday, January 8, at noon (virtually) to swear in the winners of the November races for the board's odd-numbered seats and to elect a new board president. That person will then assign committee memberships to the 11 supervisors, and it will likely fall on the chair of the board's Government Audit & Oversight Committee to schedule the hearing.

"I think it makes sense to surface those ideas whether or not we can act on them in the short term," said Mandelman.

The 50 proposals contained in the strategy run the gamut from supporting the city's trio of LGBTQ cultural districts; constructing the country's first large-scale, freestanding LGBTQ museum; addressing the lack of affordable housing for LGBTQ artists, seniors, and youth; and offering financial support to queer-owned businesses and arts institutions. One idea, the creation of a citywide drag laureate, has already been taken up by West Hollywood, which is expected to vote early this year on a plan for establishing such a position in the LGBTQ haven in Los Angeles County.

As the B.A.R. reported in August, the cost to implement the cultural strategy's multitude of initiatives is estimated to be at least $10.2 to $15.7 million. The price tag to pay for the top 10 prioritized steps called for in the document is pegged to cost anywhere from $1.3 to $2 million.

According to the document, 23 of the initiatives listed in it have received some form of funding or support to get underway. But with San Francisco expecting a $411.1 million budget deficit in the 2021-2022 fiscal year that begins July 1 and a $242.1 million deficit in the fiscal year after that, it remains to be seen how many of the strategy's proposals will be able to be funded in the coming years.

Clair Farley, a transgender woman who is director of the city's Office of Transgender Initiatives, told the B.A.R. that a main focus of hers this month will be determining what in the document can receive funding.

"One of my priorities for early in the new year is to review the recommendations and determine what we can move forward considering the current budget landscape (awaiting updated budget guidance — with hiring freeze/cuts we were not able to bring on a staff member to support implementation), COVID, city priorities, what items require additional support from the City since the plan is not currently funded outside of planning's development of the report," Farley wrote in an emailed reply in mid-December.

CA rolls out LGBTQ teacher training materials
As the B.A.R. reported last week, the state Department of Education has until July 1 to develop and update its resources and training materials so they incorporate LGBTQ cultural competency and how to address LGBTQ-based bullying to teachers and other certificated staff members. It is due to the adoption of the Safe and Supportive Schools Act of 2019.

Jonathan Mendick, a spokesman for the agency, told the B.A.R. December 30, after the article was initially published, that it has already posted some resources online and expects it will complete the website by the final date of June 30.

Backed by State Superintendent of Public Instruction Tony Thurmond, Assembly Bill 493 was signed into law by Governor Gavin Newsom with the condition that the training not be mandatory as it was estimated to cost the state's 343 school districts a combined $3.25 million. In exchange, Newsom promised to work with LGBTQ lawmakers and advocates on providing funding for school districts to train their teachers in his 2020 budget proposal.

But due to the COVID pandemic, no such funding was awarded. Last February, gay former Assemblyman Todd Gloria, now the mayor of San Diego, had introduced a follow-up bill to the one he had co-authored with Thurmond that would have required the state education department to create by July 1, 2022 an online training delivery platform and curriculum about community and schoolsite resources for LGBTQ students that both public and charter schools could use.

The bill also required the state agency to hire a lead community partner through a competitive grant process to assist in the creation of the online training. And it would have led to the creation of an advisory committee of representatives from up to 20 nonprofits that work with LGBTQ people or at-risk youth and pupils.

The legislation, AB 2240, ended up getting tabled due to the health crisis and is one of several bills that were held last year that the Legislative LGBTQ Caucus may revive this year. The affinity group for out lawmakers is also expected to seeking the funding for the 2019 law in the 2021-2022 budget.

"There was no funding in the budget this year due to the COVID collapse. I'm confident the bill and funding request will be reintroduced in 2021," gay state Senator Scott Wiener (D-San Francisco) told the B.A.R. last month.

Updated, 1/14/21: This article has been updated to give proper credit for the photo.