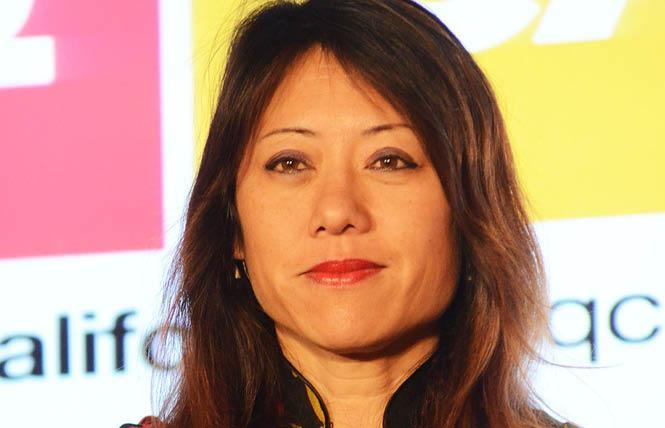 California State Treasurer Fiona Ma is backing a plan by Nasdaq that aims to diversify corporate board membership, which includes seeing more LGBTQ people serving on the governance bodies.

The technology company filed its proposal with the U.S. Securities and Exchange Commission December 1. It wants approval from the SEC to adopt new listing rules for its U.S. stock exchange that would require all companies listed there to publicly disclose consistent, transparent diversity statistics regarding their board of directors.

The new rules would also require most Nasdaq-listed companies to have, or explain why they do not have, at least two diverse directors, including one who self-identifies as female and one who self-identifies as either an underrepresented minority or an LGBTQ individual. Foreign companies and smaller reporting companies, however, could satisfy the requirement by having at least two female directors.

"This proposal and partnership gives companies an opportunity to make progress toward increasing representation of women, underrepresented minorities and the LGBTQ+ community on their boards," stated Nelson Griggs, president of Nasdaq Stock Exchange, in announcing the proposal earlier this month. "Corporate diversity, at all levels, opens up a clear path to innovation and growth. We are inspired by the support from our issuers and the financial community with this effort and look forward to working together with companies of all sizes to create stronger and more inclusive boards."

Ma announced her support of the proposal in her own statement issued Monday, December 28. The former San Francisco supervisor and Assemblywoman had sent a letter December 15 to SEC Secretary Vanessa Countryman endorsing Nasdaq's rule approval request.

"Here in California, we pride ourselves in being one of the most diverse states in the nation where we have also built the largest economy in the nation," Ma wrote in her letter. "As the first minority woman to be elected State Treasurer, I am fully aware of the importance of diversity in leadership roles in order to create financially sustainable and socially responsible corporations. I commend Nasdaq for providing companies with the opportunity to increase board diversity through a disclosure-based, business-driven approach."

Ma called the exchange's plan "realistic and necessary" and wrote that her office believes that Nasdaq's requirements will not be "overly burdensome or coercive" if implemented.

Nasdaq's proposal follows in the footsteps of its launching in September the Purpose Initiative designed to champion inclusive growth and prosperity for all stakeholders. It has pointed to extensive research that has found that companies with diverse boards have better financial performances and corporate governance.

"Incremental change and window-dressing isn't going to cut it anymore as consumers, stakeholders and the government increasingly hold corporate America's feet to the fire," stated American Civil Liberties Union Executive Director Anthony Romero. "Nasdaq's efforts to prod and push its listed companies is a welcomed and necessary first step. With increased representation of people of color, women, and LGBTQ people on corporate boards, corporations will have to take actionable steps to ensure underrepresented communities have a seat at the table."

In September, California Governor Gavin Newsom signed into law Assembly Bill 979 by Assemblyman Chris Holden (D-Pasadena), which requires by January 2023 that every publicly held corporation in California needs to have a certain number of their board of directors be from underrepresented communities, including people who self-identify as from the LGBTQ community. But the conservative activist group Judicial Watch filed a lawsuit October 2 in Los Angeles Superior Court seeking to block implementation of the legislation on the grounds that it violates the equal protection clause of the U.S. Constitution.

Mark DeSio, a spokesman for Ma, told the Bay Area Reporter that she has not signed on to any amicus brief in the lawsuit seeking to block AB 979.

A similar lawsuit was filed against Senate Bill 826 signed into law in 2018 by then-governor Jerry Brown. It required that all publicly traded corporations listed on a major U.S. stock exchange headquartered in the Golden State have at least one woman on their board of directors by December 31, 2019.

In April, U.S. District Court Judge John A. Mendez dismissed a stockholder's challenge to the constitutionality of SB 826. His ruling in the case known as Meland v. Padilla said they lacked standing to bring the lawsuit since the law applies to corporations and not the companies' stockowners.

Both of the laws require California's secretary of state to issue annual reports on the number of corporations that have complied with the diverse board requirements. Those not in compliance are to be subjected to fines of $100,000 increasing to $300,000 for each subsequent violation.