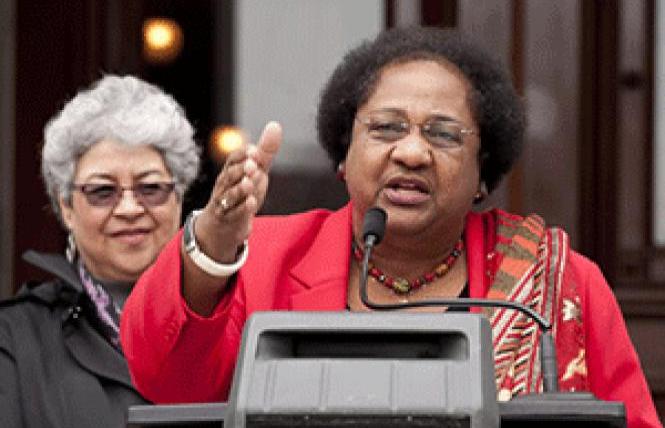 Assemblywoman Shirley Weber has been named secretary of state by Governor Gavin Newsom to replace Alex Padilla, whom Newsom appointed to fill the U.S. Senate seat of Kamala Harris. Weber is expected to be confirmed by the Legislature to the new post.

Hours after he appointed Secretary of State Alex Padilla Tuesday as California's first Latino senator in the U.S. Congress, Governor Gavin Newsom named Assemblywoman Shirley Weber (D-San Diego) to be his successor. If confirmed by the state Legislature, she will be the first African American to hold the statewide office.

Weber, Ph.D., a prominent Black Southern California lawmaker, had been outspoken about wanting to see Newsom select another Black woman to serve out the remainder of Vice President-elect Kamala Harris' term in the Senate. Harris is currently the only Black woman in Congress' upper chamber.

In a statement from the governor's office, the 72-year-old Weber thanked Newsom for the history-making opportunity to lead California's elections and expressed her excitement about her nomination.

"Being the first African American woman in this position will be a monumental responsibility, but I know that I am up for the challenge," stated Weber. "Expanding voting rights has been one of the causes of my career and will continue to motivate me as I assume my new constitutional duties."

Newsom noted that Weber, who grew up on a 100-acre farm in rural Hope, Arkansas where her father, David, was a sharecropper, has been "a tireless advocate and change agent with unimpeachable integrity."

Her father, he added, "didn't get to vote until his 30s and her grandfather never got to vote because he died before the Voting Rights Act passed in 1965. When her family moved to South Central Los Angeles, she saw as a child her parents rearrange furniture in their living room to serve as a local polling site for multiple elections.

"Now, she'll be at the helm of California's elections as the next secretary of state — defending and expanding the right to vote and serving as the first African American to be California's chief elections officer," added Newsom.

A former member of her city's school board and a professor of African American studies for four decades at San Diego State University, Weber won election to her Assembly seat in 2012. She is the first African American from south of Los Angeles to serve in the state Legislature and chairs its Legislative Black Caucus.

Atkins called Weber "an effective and passionate leader in affirming and protecting the rights of all. As secretary of state she will not only fight to protect our vital right to vote, I know she will help ensure the workings of state government are visible and accessible to all Californians."

Congratulations to my friend & fellow San Diegan, @AsmShirleyWeber, on her historic appointment as California's Secretary of State. I know Sec. Weber will fight to protect our vital right to vote and help ensure the workings of state government are visible and accessible to all. pic.twitter.com/8HaTDZziWx— Senator Toni Atkins (@SenToniAtkins) December 22, 2020

During her legislative tenure, Weber has been a close ally on LGBTQ issues. In 2015, she authored the California Healthy Youth Act, which required that all comprehensive sexual health and HIV prevention instruction and materials in grades K-12 be inclusive of LGBTQ students. It took effect January 1, 2016.

In January, she and gay state Senator Scott Wiener (D-San Francisco) successfully sought a posthumous pardon from Newsom for the late gay civil rights leader Bayard Rustin. In 1953 he had been arrested in Pasadena, California on vagrancy charges leading to Rustin spending 50 days in Los Angeles County Jail. He was also ordered to register as a sex offender.

"Shirley Weber is a true force of nature," Wiener told the Bay Area Reporter. "She's one of the most passionate and effective people I know, and she speaks with incredible power and authenticity on issues of equality and justice. Shirley is also a steadfast ally to the LGBTQ community. She's one of those straight people who intuitively get it when it comes to our community."

The selection of Weber to be the state's top elections overseer complicates the plans of a number of other lawmakers who had planned to seek the post in 2022 when Padilla would have been termed out. Weber will now be likely running for a full four-year term on the ballot that year.

Assemblywoman Lorena Gonzalez (D-San Diego) had planned to seek the office but tweeted Tuesday in praise of her legislative colleague and signaled she would not run against her.

"I feel very strongly about voting rights, that's why I was running for secretary of state. While, I would've loved the opportunity to serve, I fully appreciate the need to amplify Black women in our state. Shirley Weber is an icon and will serve California well," wrote Gonzalez.

Gay Assemblyman Evan Low (D-Campbell) also was planning to run for the position. He did not immediately respond to a request for comment from the B.A.R. but is likely also to suspend his campaign.

In a tweet Low called Weber an "outstanding" and "excellent" choice by the governor.

"Anything is possible when passion meets purpose & Asm. Weber—who will be the first Black woman to hold the position—is all about results. Our elections are in good hands," wrote Low.

In a statement issued to the news media, Low stated he looked forward to working with Weber on modernizing the state's voting systems "while ensuring the voices of all California voters are heard." He added that she will be missed in the Assembly chambers.

"She is an educator first and foremost, and her floor speeches were can't-miss viewing," stated Low. "I have been honored to work alongside her in breaking down barriers to voting access, and I have been grateful for her allyship with the LGBTQ+ community."

"Throughout her career, Dr. Weber has been a champion for the most marginalized communities — communities of color, women, the LGBTQ+ community and those who live at the intersections of those identities," stated EQCA Executive Director Rick Chavez Zbur. "She is a renowned civil rights leader and in many ways the moral conscience of the California Legislature — the perfect person to serve as California's next secretary of state."