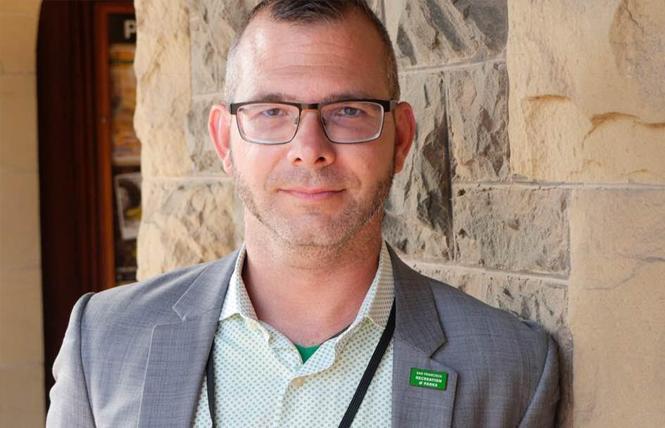 Gary McCoy is slated to become the male co-chair of the Alice B. Toklas LGBTQ Democratic Club. Photo: Sari Staver

Departing from the Alice B. Toklas LGBTQ Democratic Club as its male co-chair, due to his two-year term coming to a close, is gay lawyer David Fujimoto. Running to succeed him is Gary McCoy, 42, a gay man who is a senior congressional aide in the district office of House Speaker Nancy Pelosi (D-San Francisco).

The club's board confirmed McCoy's candidacy at its December 14 meeting. Co-chair of Alice's political action committee, McCoy is the lone person seeking to become the next male co-chair helping to oversee its 50th anniversary celebrations next year.

Alice members will vote at the club's virtual membership meeting in early January, the date of which is not yet set. If elected as expected, McCoy will serve alongside Alice's female co-chair, Catie Arbona, whose two-year term will expire in January 2022.

With 2021 expected to be an off-year for local elections, with no city races scheduled to take place until 2022, McCoy told the Bay Area Reporter his goal as co-chair is to focus on policy issues next year. Racial equity and justice will top the agenda, said McCoy, who serves on the state's homeless coordinating and financing council.

"I have enjoyed my time on Alice's board. It has always been a lot of fun," said McCoy, who has served on it since 2012 and is married to Kory Powell-McCoy, Alice's co-chair for events. "It's really important to make sure Alice has a seat at the table for policy discussions. That has ebbed and flowed over the years depending on what is going on policy-wise and the election cycle."

Fujimoto, who has spent 13 years on Alice's board, noted in his farewell message to its members that over that time the club has grown more progressive in terms of the candidates it backs and positions it takes. But he also noted that for Alice there is a "certain complex that comes with being the older sister of the younger brother with more name recognition."

He wrote that his tenure is ending with the Alice club "a diverse, independent Democratic LGBTQ organization that works within the levers of power to try to make progressive change." 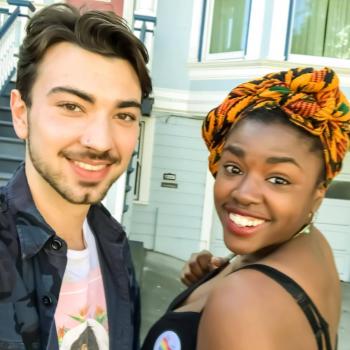 Edward Wright and Kaylah Williams are running for co-presidents of the Milk club. Photo: Courtesy Facebook

Milk club
At the more progressive Harvey Milk LGBTQ Democratic Club, current co-president Kevin Bard has decided to step down. His co-president, Kaylah Williams, is seeking reelection for another one-year term and is running to serve alongside Edward Wright, the club's vice president of political affairs, in 2021.

They are, so far, the only people to announce their candidacies to lead the club next year. They have decided not to run as part of a slate with candidates for the various board positions that Milk club members will be voting on when they meet virtually January 19.

More candidates could be announced during the Milk club's annual "Holigay Party & Fundraiser" being held virtually Friday (December 18) at 6:30 p.m. To join in, click here.

"I haven't heard of anyone else planning on running yet but it's Milk club so you never know," noted Williams, who with Bard became the first two Black co-presidents to lead the political group.

Williams, 28, who is bisexual, was elected in June as co-president following the fallout from an email Bard had sent using the group's official email account that accused San Francisco Mayor London Breed of "hobophobia" regarding her homeless policies amid the health pandemic and used language against the city's first Black female mayor that many found to be racist.

Bard and the club apologized for the May 2 email and, after holding an emergency meeting the next day, delineated a new process for distributing emails on behalf of the club to ensure multiple people reviewed them before hitting send. The club then decided to bring on Williams as its co-leader.

Recalling that dustup recently, Bard told the B.A.R., "If you want to talk about gaffes, let's talk about Mayor Breed's visit to the French Laundry." He was referring to Breed's dining at the famous North Bay restaurant last month for a birthday party at the same time she was urging residents to curtail their plans to see family and friends in order to lower the spread of COVID-19.

Having served as the Milk club's vice president of internal affairs prior to becoming president, Bard said he felt it was time to step down.

"I think three years may be a little too much for everybody involved, including myself," said Bard of his time in leadership posts with the club, joking he "became the Dick Cheney of the Milk club."

Bard, who since January has worked for Bridge Housing doing residential services and maintaining leases for its tenants, told the B.A.R. he is trying to stay removed from the upcoming board elections. He hopes he is leaving behind a club that is more professionally run with a stronger endorsement process "so people aren't throwing chairs at each other over rules or issues like that."

The Milk club now "deserves a new voice and new type of leadership, especially since 2021 probably won't be an election year," said Bard. "The club can get a breath of fresh air and focus on things we usually don't focus on, like community outreach efforts and things like that."

A longtime Milk club board member, Williams also co-chairs the Afro Socialist and Socialists of Color Caucus. She managed Chesa Boudin's successful run for San Francisco district attorney last fall. She also helped elect Alison Collins to the city's school board in 2018 as her campaign manager.

Unless a special election is called due to a vacancy in one of the city's three state legislative seats, or a recall of Governor Gavin Newsom makes it to the ballot, having not to worry about political races in 2021 will allow the Milk club to "really take a look inward," noted Williams, instead of being preoccupied with who is running and helping to elect the club's endorsed candidates. It also allows the club time to help groom LGBTQ people interested in seeking public office, as the city's out elected leadership has decreased in recent years.

"Instead of doing that for 2021, I know for us at the Milk club ... we can look inward at who our community leaders are who just need kind of a little bit of time and little bit of attention to build them up so they are ready to run," said Williams, who has not ruled out seeking public office herself in the future.

Wright, 29, who is queer, works as a legislative aide to District 4 Supervisor Gordon Mar. He joined the Milk club five years ago but first met Williams when the two worked on the mayoral campaign of former District 6 Supervisor Jane Kim, whom Wright had also worked for as a City Hall aide.

He managed Mar's election campaign in 2018 and then joined his City Hall staff. A native of Michigan, Wright moved with his family as a teenager to the Sierra foothills of California north of Sacramento. Inspired by the Milk club's namesake — the club was named in his honor following his assassination in 1978 — Wright moved to the city and attended San Francisco State University.

He graduated with a B.A. in film production with political philosophy as a minor. His thesis project was a short documentary about the city's drag scene that happened to feature Honey Mahogany, who would go on to be a Milk club co-president. (In 2019, Bard defeated Mahogany in their bid for another term alongside a new co-president in an acrimonious leadership battle for the Milk club.)

Wright told the B.A.R. that he has a tattoo of Milk's famous red and white bullhorn on his arm. He had worked as an aide to gay Milk confidant and labor leader Cleve Jones at UNITE HERE, and one of his last projects was helping to secure the transfer of the bullhorn to the Smithsonian.

"So, needless to say, the symbology of the club itself means a lot to me," said Wright, adding that he now wants to lead the Milk club because it is his "political home first and really played a large role in my politicization, getting me engaged and activated in politics at the local level. I have a real deep connection to the legacy of the club and the history of the club. I want to help serve the organization as it has done so much for me."

The Political Notes column is taking an end of the year hiatus and will return Monday, January 11.