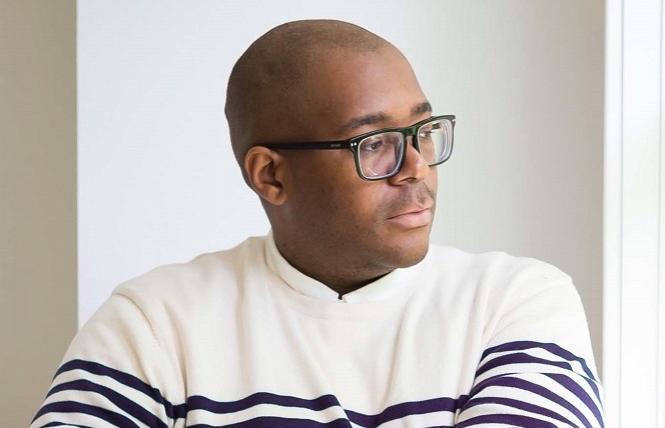 The novel, named a New York Times Book Review Editors' Choice and which O: The Oprah Magazine called a "blistering coming of age story," is based on Taylor's experiences as a young Black gay biochemistry graduate student navigating a predominantly white Midwestern campus.

In the book, readers follow protagonist Wallace and his friends through one intense weekend as they navigate complex relationships — including Wallace's sexual adventures with a fellow student who says he's "not gay" — and struggle with the question: What is real life?

Despite the heavy topics in his writing, Taylor's mood was light and he laughed easily in a conversation on this week's Out in the Bay podcast and radio show. Perhaps he was buoyed by a recent deal to make "Real Life" — published in February when he was just 30 — into a feature-length film for which he will write the screenplay.

He read passages from his book on Out in the Bay, talked about his life and his writing process, and gave his takes on personal and societal challenges.

Racism and homophobia "are inflected in each other," said Taylor. "Both work by limiting people's understanding of your humanity and their ability to perceive you as a fully realized human."

He also spoke of the "friction" that often exists between women and queer men despite solidarity on many fronts. This agitation ignites in "Real Life" when a female colleague angrily accuses Wallace of misogyny.

"As a queer Black man, in the context of white women, in many ways I'm like, 'Yes, I understand that I'm a man and I have privileges that you don't have, but also you have privileges I don't have,' and I think we just need to be kind and considerate to each other," said Taylor. "We need to find a way to build actual solidarity."

Taylor said as someone first exposed to queer culture through movies and films, he's excited — and also a bit terrified — to start adapting his novel into a screenplay. "It feels really special to imagine that something I've written may be someone else's entrée into queer text."

Hear more from author Brandon Taylor on this week's Out in the Bay-Queer Radio from San Francisco. The program re-airs at 9:30 a.m. Saturday, December 19, on KSFP 102.5 FM in San Francisco only, and is available anytime on Out in the Bay's website. Out in the Bay also airs at 10 p.m. Tuesdays on KALW, 91.7 FM throughout the Bay Area.