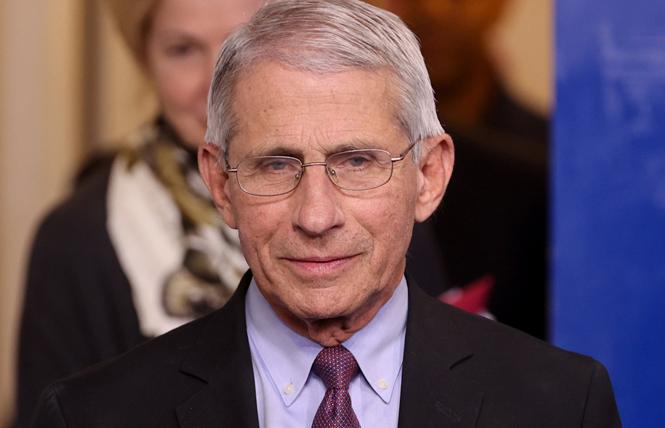 President Donald Trump's effort to silence Dr. Anthony Fauci is dangerous for public health. Fauci hasn't been seen in a national TV interview in weeks, and has acknowledged that he hasn't briefed the president on the novel coronavirus outbreak in more than a month. (He went to the White House Monday but did not meet with Trump, and he's been doing web interviews with various universities.) Fauci is the country's top infectious disease expert; he has led the National Institute of Allergy and Infectious Diseases since 1984, and back then, the LGBTQ community relied on him for honest information about HIV/AIDS, even as he didn't have all the answers. Fauci became an indispensable ally in the quest for federal funding for research into new drugs that have saved the lives of people with HIV/AIDS. Fauci has worked for six U.S. presidents and was awarded the Presidential Medal of Freedom by President George W. Bush in 2008.

The fight against this global COVID-19 pandemic cries out for leadership. Since the president has refused to lead, the public is forced to depend on Fauci's fact-based medical advice on how the nation can recover. For a time this spring, Fauci and Dr. Deborah Birx were regular participants in the daily White House coronavirus news conferences, but no more. Fauci's exclusion comes at a critical time when clear health guidance is necessary to limit infection rates. Instead, a common-sense health recommendation to wear face coverings has devolved into a needless political battle by those on the right, and confusion roils states in varying degrees of re-opening, re-closing. Over the weekend Florida reported 15,300 cases in a single day — a record in this country, even surpassing New York at its height.

The simple truth of the matter is that the president is unhappy that Fauci disagreed with his rosy assessment that the country is "doing great" and has criticized some states for reopening too quickly. Things have gotten so bad that NBC News reported Monday that the Association of American Medical Colleges issued a statement in support of Fauci, saying it was "extremely concerned and alarmed" by efforts to discredit him. The White House had issued a statement to reporters — akin to opposition research on a political opponent — that took several of Fauci's prior statements out of context in an effort to show "he has made mistakes," as press secretary Kayleigh McEnany put it. Fauci's past statements were made with the best information available at the time, though he and others have changed their health recommendations as knowledge about the virus changes.

Indicative of this country's uneven response to COVID-19 was California's about-face this week. Governor Gavin Newsom ordered indoor businesses to close again. He probably should just reinstitute the strict stay-at-home order he issued back in March. This virus is incredibly effective at transmission — and deadly. Trump's bluster earlier this year that it would burn out by summer has proved false; if anything, it's worsening, especially in Sun Belt states like Arizona, and Texas and Florida in the South.

On a hopeful note, according to a survey reported by NBC News Monday, Americans trust Fauci on COVID-19 overwhelmingly — 67% to 26% for Trump. And, as the New York Times reported, Trump is probably stuck with Fauci, a career civil servant who cannot just be fired via tweet like so many of the president's former cabinet secretaries and other advisers.

The contention that many people in San Francisco have already had the virus and are "done with it" underscores the seriousness of gaining control of the situation. Mayor London Breed herself was recently exposed to an infected person — she tested negative — and she changed course to pause business reopenings that had been planned for this week. The virus is not going away, so Breed and other officials have held virtual public meetings in recent days to inform people of the data points they are using to determine when it will be safe to reopen. And doctors are just realizing that they don't yet know how long antibodies will last in a person who has had coronavirus, raising questions about long-term immunity. The actor Tom Hanks, who along with his wife, Rita Wilson, had COVID in March, said in an NBC interview last week that the antibodies he developed are fading, leaving him at risk for reinfection.

People are becoming inured to the demands of staying healthy. If anyone thinks rising case numbers don't impact them, they are wrong. This is a choice between life and death and Americans need to hear from Fauci.