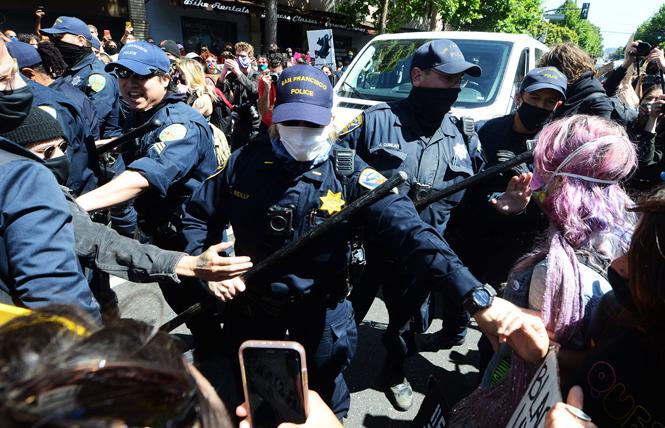 During a June 3 protest against police brutality in the wake of George Floyd's death by Minneapolis police, a nonbinary San Francisco police officer was sent home for wearing earrings on the job — a dress code violation that had been rarely enforced or reprimanded. Officer Rubin Rhodes also took a knee in solidarity with protesters outside Mission Station. Scott has said that revisions to the dress code are in progress, but it's the captain at each station who is responsible for day-to-day operations, and the appearance of singling out Rhodes for retaliation falls under Caltagirone's purview.

Then last Sunday, during the Pride is a riot march in solidarity with Black Lives Matter that started near Mission Dolores Park, officers stormed the demonstrators, pulled out their clubs and became aggressive. According to KQED, the trouble started when Pride demonstrators marched from Dolores Park and tried to turn left onto Valencia from 18th Street. A white police van drove south down Valencia Street and blocked them. That lone police van and roughly a half dozen police officers formed a line to stop hundreds of marchers from heading down Valencia. No explanation has been given for why officers were ordered to block protesters. This march had been reported on for at least a week prior, so police should not have been surprised. It seemed as though police sought to antagonize and harass marchers. No arrests were made, according to SFPD, which raises further questions about why the van's attempt to block the march was necessary.

It's not only protests. In addition to complaints about health and safety issues over the years from Castro business owners and residents located within Mission Station's precinct, there is frustration that police are ineffective in dealing with problems associated with tent encampments, homeless people, and crime. (Now that the city has decided to reduce the police department's budget in response to calls for "defunding the police," a more humane alternative may be for social workers or medical personnel to attend non-emergency cases.)

The Castro and the LGBTQ community have had a fraught and sometimes violent relationship with the police since the 1970s. Five decades later, we're still demanding that police treat queer people and their allies fairly and respectfully. If Caltagirone continues to lead his officers in an adversarial rather than cooperative relationship with the community, Scott should replace him. More broadly, SFPD leadership needs to change how it responds to peaceful demonstrations. In last Sunday's case, the Pride is a riot march simply did not rise to the level requiring police action; they should have stayed on the sidelines.

Updated, 7/14/20: This has been updated to indicate we heard from individual Castro business owners, not the Castro Merchants business groups. We regret any confusion.