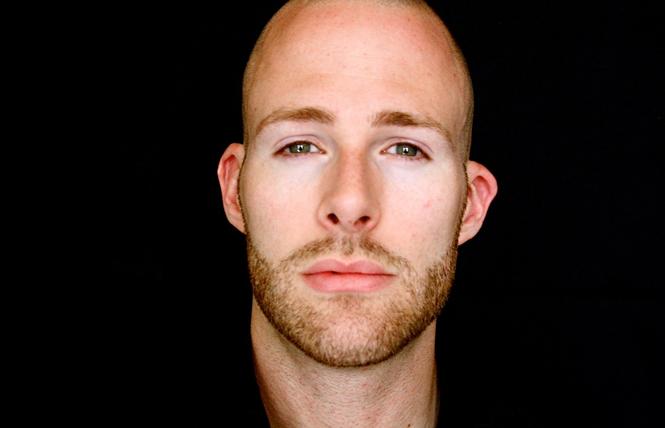 "They didn't see me as a victim," Ben Kincannon told the Bay Area Reporter.

On December 5, 2017, Kincannon, 36, said he hooked up with a man he had met on the dating app Scruff, after a few weeks of communicating through text message.

According to Kincannon, shortly after he arrived at the alleged assailant's apartment, the situation got out of hand.

"Once we got behind closed doors, he beat me up," Kincannon said. "He fractured my ribs, in addition to choking me and slapping me. After he fractured my ribs he sat on me and pinned me down, grabbed my head, and violently moved my head from the floor to his crotch."

The San Francisco District Attorney's office did not file charges against the man who is allegedly responsible for the assault, citing a lack of evidence, spokesman Alex Bastian said.

The Bay Area Reporter is not naming the man because he has not been arrested or charged in the alleged incident.

Kincannon, who is legally deaf, said he repeatedly told the man to stop without avail.

"He heard me every time I said stop and he never stopped until he wanted to," Kincannon said. Kincannon left the man's apartment shortly after the incident.

A few days after the incident, Kincannon visited the Mission Neighborhood Health Center for treatment for his injuries. Medical documents from Kincannon's physician, Dr. Brad Williams, on December 8, 2017, state that Kincannon "may not return to work at this time due to injury. He may return to work 1/18/18."

In another document signed by Williams it states, "On 12/7/17 Mr. Kincannon presented to our clinic with right chest injuries resulting from an assault two days prior. On exam he was found to be in distress secondary to severe pain, and there was soft tissue swelling overlying the right lower rib cage." The document also stated that Kincannon visited the clinic an additional three times for the same injuries.

Another document from December 6, 2017 states that Jorge Villarroel, a licensed marriage and family therapist from the same clinic, was treating Kincannon for depression, anxiety, insomnia with nightmares, and intrusive thoughts caused by the alleged assault. (Kincannon shared his medical records with the B.A.R.)

Kincannon filed a police report two days after the incident, then another two over time due to errors in the initial report and additional documents Kincannon wanted to include, he said. Errors in the initial report included the wrong spelling of the alleged assailant's name, incorrect date of the incident, and that it stated that the "wrestling match" was consensual. The case was turned over to the Special Victims Unit in January 2018.

"The SVU officer repeatedly screamed in my face that this was consensual," Kincannon said.

After the report reached a third officer, Sergeant Destiny Anderson, it was eventually turned over to Assistant District Attorney Lisa Williams. Anderson was one of the first officers to take Kincannon's allegations seriously, he said, and she felt there was enough evidence to hand it over to the DA's office in hopes of getting an arrest warrant issued for the alleged assailant.

Williams, however, believed the situation to be consensual, Kincannon said, and denied the arrest warrant.

"ADA Williams said since I went to [the alleged assailant's] apartment I consented," Kincannon said in a text message to the B.A.R. "I never consented to being assaulted. I thought I was going over there for sex, not fractured ribs and further trauma."

Bastian did not directly respond to Kincannon's allegation against Williams, but said there was "insufficient evidence" in the case and a "lack of corroborating evidence to warrant a felony charge."

Bastian also said that aside from the lack of evidence, Kincannon's injuries were not severe enough for the alleged assault to be considered a felony and that it had also reached its one-year statute of limitations for a misdemeanor charge, as the DA's office received the case February of this year.

Police response
In response to the accusations of homophobia Kincannon has made against some of the SFPD officers who were involved in the case, SFPD spokesman Sergeant Michael Andraychak wrote in an emailed response, "The San Francisco Police Department takes every report and investigation seriously. In this case, Special Victims Unit investigators met with the victim and discussed his case and progress of the investigation. An investigator presented the case to the district attorney's office, which determined there was insufficient evidence to pursue a criminal case."

"I think homophobia is part of it. None of the cops called me a gay slur, but I think degrees of homophobia were present," Kincannon said. "The police officers saw it through a heterosexual light. They think it was just two dudes who were just buddying around."

Andraychak did not comment on what Kincannon said Tiffe told him.

Some of the evidence that Kincannon had presented to police and the DA was in the form of text messages between himself and the alleged assailant the day after the incident.

On December 6, 2017 around 3 a.m., Kincannon texted the alleged assailant, "Whatever you did to my ribs has made it too painful to sleep. Fuck you. Every moment and breath is agony. You assaulted me."

The alleged assailant responded by saying Kincannon was not a victim in this situation.

"I was concerned and asked if you were OK. I certainly didn't want to hurt you," read the alleged assailant's text message.

A mutual friend of Kincannon and the alleged assailant spoke to the B.A.R. about the impact the alleged attack had on Kincannon. The friend did not want his name to be used. He said that Kincannon told him about the incident a couple of days after it happened.

"Ben told me about it right away," the friend said. "It really messed him up and the affects of the trauma lasted a long time."

At the time the friend told Kincannon, "I said 'Ben you have to call the cops,' but because he is gay, the cops didn't work real hard."

Kincannon is currently waiting for a doctor's referral to get a CT scan to determine if there is any further damage to his rib cage. Kincannon said he went public in hopes of preventing other victims from experiencing the same thing.

Williams and Anderson did not respond to requests for comment from the B.A.R.