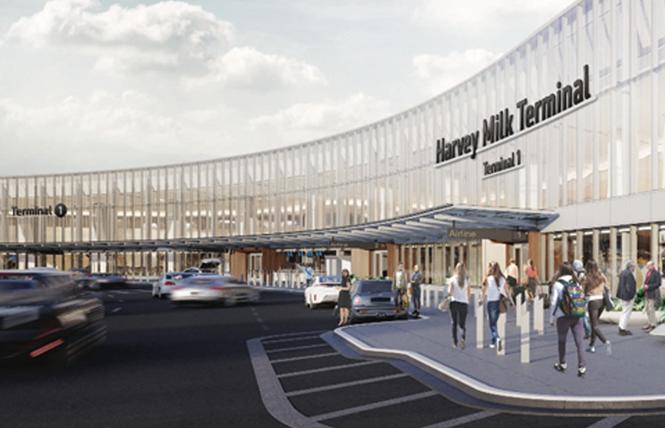 Equality California is rescinding the award it had planned to present San Francisco International Airport at its San Francisco Equality Awards gala May 11 due to its handling of the signage for the Harvey Milk Terminal.

As the Bay Area Reporter reported Monday, community leaders and the family of the late gay supervisor Harvey Milk blasted SFO officials during a City Hall hearing for downplaying Milk's name on the signage for the terminal being renamed after the LGBT icon.

Last year, city leaders decided to rename the under renovation Terminal 1 after Milk, who in 1977 became the first openly gay person elected in San Francisco only to be killed 11 months after taking office. But how the airport plans to incorporate Milk's name into the signage for the terminal has come under fire.

Last fall, SFO officials released renderings for the exterior signage for the Milk terminal that gave more prominence to Terminal 1 than Milk's name. District 9 Supervisor Hillary Ronen is seeking passage of an ordinance that would force the airport to install signage for the terminal that has the name "Harvey Milk Terminal" in a larger font size above smaller lettering for "Terminal 1."

Stuart Milk, the gay nephew of Milk, has been one of the more vocal critics of the airport's sign designs. After Monday's hearing, he told the B.A.R. that he was unaware that EQCA, on whose board he serves, had planned to honor SFO this spring until that morning. He said he had informed EQCA Executive Director Rick Zbur that he felt such an honor was inappropriate due to how SFO has handled the Milk terminal naming.

"I didn't know about it until today. To be honest with you, that is my fault not EQCA's," said Milk, who co-founded a foundation in honor of his uncle and faulted the airport for not once contacting him over the last six years about the terminal naming. "I am sure there was some communication they were honoring the airport. I did not see that and I am now communicating to Rick that is a mistake."

Reservations
Gay former San Francisco supervisor David Campos also told the B.A.R. he had asked EQCA not to honor SFO this year following the March 11 hearing. When he first learned about the award he had reservations, said Campos, but was waiting to see how the hearing went before talking to the statewide LGBT advocacy group.

After hearing the airport director Ivar C. Satero Monday, Campos said he determined that the airport doesn't deserve to be honored.

"When I heard about the award I indicated I didn't have a problem with the airport getting it if they changed course and did the right thing around the Harvey Milk issues. If anything, they haven't and doubled down on this issue," said Campos, who has been the main proponent for honoring Milk at SFO. "I don't think this organization should be honoring an airport that has stood in the way of recognizing the contributions of our community's most important icon in San Francisco."

When the B.A.R. asked EQCA in February why it was honoring SFO, spokesman Samuel Garrett-Pate said it was for being led by gay former director John L. Martin for more than two decades and being the first airport in the U.S. to incorporate gender-neutral bathrooms into its larger, multi-use bathrooms. He added that EQCA officials were confident the signage scuffle over the Milk terminal would be resolved quickly.

But after the negative reactions elicited by Monday's hearing, EQCA determined it could no longer honor the airport at this time. In a statement to the B.A.R. Zbur explained that the organization came to the conclusion that doing so would be "premature" in light of the ongoing controversy. 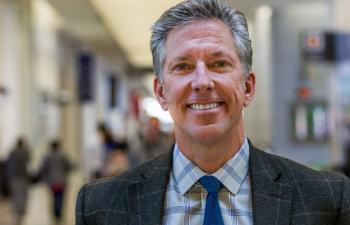 "Equality California believes that the Harvey Milk Terminal at SFO must be an incredible representation of the heroic life and legacy that Harvey Milk lived," stated Zbur, adding that the organization agrees with myriad San Francisco officials and community leaders "that Harvey Milk's name should be as bold as both his message of hope and his admonition to LGBTQ people that we come out and be visible as a community."

He added that, "We had initially planned to recognize SFO this year for the airport's proud legacy of LGBTQ representation among its leaders and staff, outreach and employment policies, inclusion of LGBTQ travelers and conscious efforts to build the most welcoming airport in the world. At this time, however, we believe that recognizing the airport at this year's Equality Awards would be premature, and we would prefer to wait until the airport has submitted plans for appropriately bold signage and the public has had the opportunity to see and experience the Harvey Milk Terminal and the amazing public art and exhibitions inside."

Gay former supervisor Bevan Dufty, one of the co-chairs of the EQCA gala, had suggested last year the honor for SFO due to the numerous LGBT people who have served in leadership positions at the airport over the years. But watching the hearing Monday "was difficult," said Dufty, who spoke to Zbur Monday night about rescinding the honor this year.

"I suspect we may have moved prematurely and that the public should be able to see Terminal 1 before any accolades are offered," said Dufty, who expects that the airport's planned artworks and photomontage honoring Milk and his legacy "should be outstanding" and make it a sought after destination.

"And so I hope the combination of political direction on the signage and the artistic elements are going to enable the public to really enjoy this. And not to have any sense of the discord we saw at yesterday's hearing," said Dufty, now board president of the BART regional transit agency that has a stop at SFO. "If we get it right, this terminal — the Harvey Milk Terminal — will have worldwide reach. People will come from around the world to see it."

Lesbian former supervisor Leslie Katz, another co-chair of EQCA's local gala, also told the B.A.R. she had reservations about honoring SFO this year following this week's board hearing.

"It is funny. Years ago when we were pushing through the equal benefits ordinance, it was the airport that was absolutely critical in our success and victory," recalled Katz, referring to a local law vehemently opposed by airlines that required businesses with city contracts to offer the same benefits to their LGBT employees as those given to their straight co-workers. "It was very disconcerting to hear about the concerns over the terminal naming of a truly extraordinary figure in our community's history."

As Zbur stated, "It is our sincere hope that SFO works with the Board of Supervisors, the mayor, and the community to ensure that the terminal's tribute to Harvey Milk is impactful, visible, and appropriate for the incredible contributions he made to the city and to our community. And we look forward to coming together to celebrate the terminal when it opens."

Airport spokesman Doug Yakel did not immediately respond to a request for comment Tuesday.

At Monday's hearing before the supervisor's rules committee, which Ronen chairs, Satero sought to have the legislation scrapped in favor of coming to an administrative solution. Yet Satero then presented mockups for the exterior signage that showed Milk's name would be prominently displayed over the first entrance to Terminal 1 that visitors would encounter but then be dropped entirely at the other entrances.

He reiterated the airport's previous concerns about "wayfinding" and the need to make it easy for passengers to be able to navigate through SFO and easily find Terminal 1. It prompted Ronen to amend her legislation so that it requires any signage for Terminal 1, both on the exterior and interior of the facility, includes Milk's name.

The full Board of Supervisors Tuesday, March 19, will vote on Ronen's ordinance and then a second time at its March 26 meeting before sending it to Mayor London Breed for her signature. Breed late last year told the B.A.R. there was a need for both "appropriate acknowledgement" and information about Milk at the terminal, "and not just his name only but information to that effect, both when you come to the airport and as well as when you go on the website for the airport."

The permanent exhibit, signage, and a lighting art piece in the southern portion of the arrivals level honoring Milk are to be unveiled in March 2020, according to the airport.