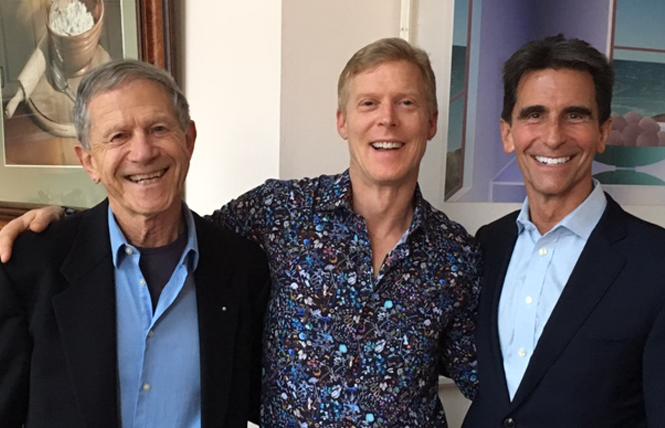 Angus J. Whyte, a gay man whose administrative and financial acumen helped guide the San Francisco LGBT Community Center project when it was in its infancy, died March 6 in Palm Springs, California. He was 81.

Gay former state lawmaker Mark Leno told the Bay Area Reporter that Mr. Whyte was hired as an administrator for the center's capital campaign in the late 1990s. Leno and lesbian Jody Cole co-chaired the effort to raise millions of dollars to construct the building (and remodel the Victorian) at 1800 Market Street.

"I think we raised the first $3 million for the project and Angus was our partner," Leno said in a phone interview.

Leno served as the capital campaign co-chair from 1996 to 1998, when then-mayor Willie Brown appointed him to a seat on the Board of Supervisors.

"Angus was a lifelong friend. I met him 45 years ago. I had just met Michael Tilson Thomas in New York City and MTT wanted me to meet Angus, who was in Boston," Leno said, referring to the gay outgoing music director of the San Francisco Symphony.

Mr. Whyte had a love of music — Leno called him a "true Renaissance man" — and was a talented musician. His professional career was largely devoted to the fine arts.

He revived and operated Art for Healing, a charity designed to accept original works of art by donation and place them in hospitals and healing centers, according to an obituary written by his spouse, Thom Grexa Phillips.

Mr. Whyte earned a fellowship at the Conservatorium van Amsterdam in harpsichord studies with renowned harpsichordist Gustav Leonhart in the Netherlands in 1963. He continued his studies with an internship at the Mozarteum University in Salzburg, Austria in 1963.

"Angus enjoyed donning the gay apparel of the 18th century as he played his beloved music written by Haydn and Bach," Phillips wrote. "At one time he insisted he did not want to play any music written after 1769."

Mr. Whyte was born April 8, 1937 in Carmichael, California to Angus Joseph Whyte Sr. and Rachel Valerie Davidson. He graduated early from McClatchy High School in Sacramento and continued his studies and earned degrees from UC Berkeley and the University of Washington. He also completed the executive training program in administration at Harvard University.

In addition to music, Mr. Whyte had an eternal love of French language and cuisine. He earned a Fulbright Fellowship to teach English at a secondary school in Menton, France in 1959. In 1989, he realized a renovation of an abandoned three-story tower in a village in southwest central France.

Mr. Whyte published a series of memoirs and short stories entitled "After-Dinner Tales" in 2013 that are available online. He was completing a second volume of tales entitled "The Lavender Blade" when he fell ill and died.

Leno said that he saw Mr. Whyte and Phillips when they were in San Francisco several weeks ago.

"I feel privileged to have known such a rare, unique, loving, talented, and proud gay man," he said.