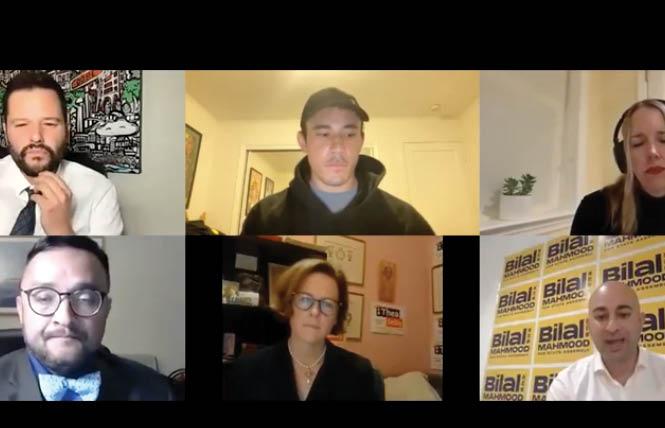 "With all due respect to the supervisor, and this is for the voters, if you want to see the kind of work the supervisor does look at what has happened to the Tenderloin under his leadership, if you can call it that," said David Campos, a gay man who is one of the four people seeking the seat. "Thank you, Mayor [London] Breed, but that's not the kind of leadership you need in Sacramento today."

Haney, a straight ally who represents District 6 on the Board of Supervisors and is a Tenderloin resident himself, had been defending his record representing the neighborhood since 2019 while responding to another candidate — straight ally and former Obama administration staffer Bilal Mahmood.

Mahmood said he lives in District 6, too.

"The onus should be on the supervisor," Mahmood said. "Blaming me for not meeting you is an unfortunate mistake."

The forum was hosted by the nonprofit TogetherSF and the Rescue SF coalition. The candidates (the fourth is Thea Selby, a straight ally who is a City College of San Francisco trustee) answered questions put to them by the San Francisco Chronicle's Heather Knight. A special election will be held February 15 to fill the state Assembly seat vacated by David Chiu, a straight ally who became city attorney late last year. District 17 is concentrated on the city's eastside.

Knight said that 80% of San Franciscans think addressing the homeless crisis is a top priority and 88% think it's getting worse. She then asked the candidates what they thought about Breed's declaration of a state of emergency in the Tenderloin, one of the city's most impacted neighborhoods.

The candidates were in broad agreement on the state of emergency.

"I do support the state of emergency," Haney said. "We have a crisis on our streets — two people a day dying — and it's something I've been screaming and yelling about since I've been on the board. This neighborhood and the people here are hurting."

Haney said that city leadership has engaged in "a conspiracy against this district" by allowing it to become a de facto "containment zone" for open-air drug dealing.

"We have to confront open-air drug dealing," Haney said. "It is having a devastating impact on our neighborhoods. It is killing people. It should not be allowed. We can't continue to allow this in this neighborhood, or any neighborhood."

Selby said that she initially got involved in politics because of bad conditions in the Haight.

"I live in the Lower Haight and I got involved in politics because there was a double homicide across the street from my house," Selby said. "I know, from that experience, that there's a way out of that and the way to get out of that is through collaboration and cooperation; you can't do just one thing, you have to do a variety of things. And so in our case what we did was make sure the community got together rather than feel completely isolated. The Tenderloin has more families, more immigrant families, than any neighborhood of San Francisco, and they feel isolated."

Campos said that dealing with conditions in the Tenderloin is one reason he's running again to become a state legislator. (He lost to Chiu in 2014.)

"We need the state of California to intervene," Campos said. "It's clear that jurisdictions like San Francisco dealing with it is not enough."

The candidates were more likely to disagree when the question came to how much law enforcement should be involved, and what they should do when they are.

Mahmood said he was in favor of more police on the streets.

"As a former policy analyst for the Obama administration, I understand the need to marry science and policy together and that's what the mayor's emergency plan does," Mahmood said. "Targeted increases in patrols in high risk areas does statistically reduce the incidence of crime. This isn't about a war on drugs, it's about making the area safer for families."

Campos said that "I do think there has to be enforcement of criminal law," but also that the "last thing I want" is a revival of the drug war.

On leave as chief of staff to Boudin, Campos said that the DA's office tried to hire prosecutors to go after drug suppliers but that it was held up by the Board of Supervisors.

"If you look at the number of cases brought to the DA's office, the prosecution rate is high — 70%-80%," Campos said. "But there has to be a way of cutting off the supply. I believe what should have been done is to focus on shutting off supply and that's what we tried to do. Unfortunately we could not get the Board of Supervisors budget committee to introduce a proposal to fund that effort."

Mahmood said that because of the potency of fentanyl, it's misguided to only go after the big fish.

"I believe when people are dealing fentanyl illegally it's effectively manslaughter, and we need to change the rate of prosecution, we need to change the type of conviction rate because the crime should be commensurate to what they're being charged with," Mahmood said. "In that context we need new types of solutions. The problem in San Francisco is we keep doing the same thing over and over again."

Selby agreed that street drug dealing should be prosecuted.

"One of the shocking things I learned is that the DA [Boudin] said we should not be prosecuting drug dealers because it might harm their families in Central America," Selby said. "I have to say we have to worry about ourselves first. Think of all the immigrants in the Tenderloin dealing with these crimes on a daily basis. You have women who are being human trafficked. They lose their ID, they are forced to essentially be raped, and we don't do anything to help these women."

Boudin later stated to the B.A.R.: "I never said that." Selby stated she read that he had. The B.A.R. could not find a quote from Boudin stating this, but Selby provided a video clip of Boudin stating some drug dealers in San Francisco are victims of trafficking from Honduras and law enforcement interventions may result in their deaths or the deaths of their families.

"We need to be mindful about the impact our interventions have and about how those interventions can be effective," Boudin said in July 2020. "Some of these young men have been trafficked here under pain of death. Some of them have had family members in Honduras who have been or will be harmed if they don't continue to pay off the traffickers who brought them here. These are not idle threats. I can tell you from a young Honduran man, who I personally represented when I was a public defender, who was accused of selling drugs, and who was guilty of selling drugs ... when he cooperated with federal authorities in a different state, his father in Honduras was killed in retaliation."

Boudin, when asked to elaborate, told the B.A.R. that "the quote from that video you describe is totally different than what you said she attributed to me in the email. Never did I say 'we should not be prosecuting drug dealers.' In fact, my administration has charged drug sales cases at higher rates than my predecessor did."

Haney said that "there need to be effective consequences for folks arrested for dealing drugs."

He added, "We need our attorney general, we need state law enforcement, we need federal law enforcement because the issue is not the people on the corner only but who's putting them out there."

Homelessness
On the issue of unsheltered people living on the streets, Campos touted his record from when he was District 9 supervisor.

"I was criticized from the left as a supervisor because when tents went up in D9 I worked diligently to get rid of them," Campos said. "I don't think that there's anything progressive or compassionate about allowing people to live in tents.

"The way we cleared those tents is I worked with city agencies and I went to those encampments, tent by tent, to connect those individuals with services," Campos added.

He argued that "we need corporations and wealthy Californians to pay for those services."

Mahmood said that the issue is not a lack of money but a lack of innovative ideas.

"I don't think solving homelessness is a money problem, it's an ideas problem," Mahmood said. "If you look at the governor's [budget], it's $2 billion in additional funding ... so it's really not the money that's the issue, it's that we keep trying the same thing over and over and over again."

Mahmood said he is a big believer in the Built For Zero program, which is being tried in many cities nationwide. Built For Zero proposes the creation of "an integrated, command center team" connecting local government, Veterans Affairs, the housing authority and nonprofits in their efforts to combat homelessness.

Update: Jan. 14 at 2:04 p.m. — This story has been updated to include District Attorney Chesa Boudin's denial of comments Assembly candidate Thea Selby attributed to him.

Update: Jan. 15 at 2:22 p.m. — This story has been updated to include District Attorney Chesa Boudin's remarks about how law enforcement interventions may harm victims of human trafficking who are selling drugs.

Update: Jan. 18 at 11:50 a.m.: This story has been updated to include District Attorney Chesa Boudin's elaboration on his remarks about how law enforcement interventions may harm victims of human trafficking who are selling drugs.