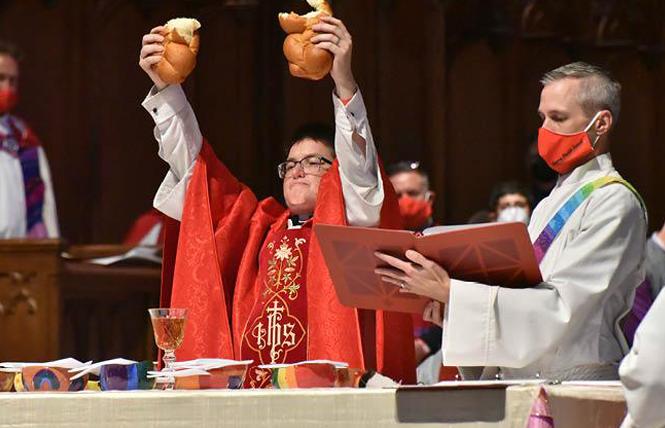 Bishop Megan Rohrer of the Sierra Pacific Synod, Evangelical Lutheran Church in America, will lead worship and preach at St. Francis Lutheran Church in San Francisco Saturday, November 20, at 4 p.m. at 152 Church Street. The congregation will observe Transgender Day of Remembrance at the service. As the Bay Area Reporter previously reported, Rohrer was installed earlier this year as the first openly transgender bishop in a mainline Christian denomination and leads 182 congregations in Northern California and Nevada.

"The heartbreaking murders of these beloved children of God are attacks on every one of us and an attack on Christ as well," stated the Reverend Bea Chun, pastor at St. Francis. "This hateful violence is unacceptable and has to stop. It is a call to action and a call to stand in solidarity with our transgender siblings."

TDOR was founded in 1999 by Gwendolyn Ann Smith, who writes the B.A.R.'s Transmissions column.

At the St. Francis service, members of the transgender community will be featured as speakers, and Rohrer will preach a sermon to lead the assembled guests in reflecting and remembering on this important occasion. This year, the St. Francis endowment provided a third grant of $3,000 (the first two were in 2017 and 2018) to the Louise Lawrence Transgender Archive in Vallejo. The archive's executive director, Ms. Bob Davis, will be one of the speakers.

Members of the community are welcome to attend. Space is limited. An RSVP with proof of full COVID-19 vaccination is required. Visit http://sflcsf.org/ to register by November 17. The event will be livestreamed on the church's YouTube channel.

SF TDOR event
The trans-owned Fluid Cafe and Events will hold a Transgender Day of Remembrance event Saturday, November 20, from 2 to 5 p.m. at 332 Golden Gate Avenue. The theme is "Stronger Than Ever," and it will be an in-person event, as well as livestreamed. At press time additional information was not available.

In a news release, Smith, the aforementioned TDOR founder, stated, "Transgender Day of Remembrance seeks to highlight the losses we face due to anti-transgender bigotry and violence. I am no stranger to the need to fight for our rights, and the right to simply exist is first and foremost. With so many seeking to erase transgender people — sometimes in the most brutal ways possible — it is vitally important that those we lose are remembered, and that we continue to fight for justice."

The Osher Marin JCC event is sponsored in part by the Spahr Center, Marin's community center for the LGBTQ and HIV communities. It will feature a panel of transgender people from Marin County, and a keynote speaker addressing the intersections of racism, transphobia, and misogyny that leads to Black transgender women specifically being murdered in such high numbers, the release stated.

Attendees will be required to wear masks and show proof of COVID vaccination or a negative COVID test within 72 hours of the event.

Suzie Jennings, owner of Spunk Salon, announced that the Castro Art Walk will be returning December 9 from 5 to 8 p.m.

The popular art walks used to be held monthly. The website notes that a small team of volunteers is working with Castro Merchants and the Castro Art Project to bring back the walk for the holidays.

In other news at the meeting, Alessandro Raimondi, who is planning on opening the Vico Cavone restaurant at 4248 18th Street (at Diamond Street) December 5, said he wants to celebrate with a block party.

"We would like to close the street that goes from Mollie Stone's [Collingwood Street] to Vico Cavone with drag queens and singing," Raimondi said. "It'd be nice to create this show for the grand opening for all the Castro."

In an email to supporters, the society stated that it is taking the opportunity to reflect on the past year and wants to hear from people. One recent big change was the departure of former executive director Terry Beswick, who in September announced he was resigning. He has since started as executive director of the Golden Gate Business Association.

The society stated that while it's in the midst of the second year of the COVID-19 pandemic, it has been able to reopen its museum in the LGBTQ Castro neighborhood and is processing a backlog of collections in the archives. It is also continuing its popular virtual program series.

For the town hall, attendees are encouraged to submit questions in advance to info@glbthistory.org (put Town Hall in the subject line). Tickets are free and speakers will include the interim co-executive directors, Kelsi Evans and Andrew Shaffer. To register, click here.

Covenant House executive sleep out
Covenant House California will hold its virtual executive sleep out Thursday, November 18, from 7 p.m. to 7 a.m. the following morning at its locations around the state, including in Oakland. Individuals and teams can support the effort by joining together to raise funds, and then participate on the evening of the event. Executives and other leaders and interested community members are encouraged to participate so they can hear from youth facing homelessness, such as the clients at Covenant House.

According to an email, sleepers will join an interactive program that will introduce them to young people who have overcome homelessness, inform them about issues related to youth homelessness, and connect them with other participants.