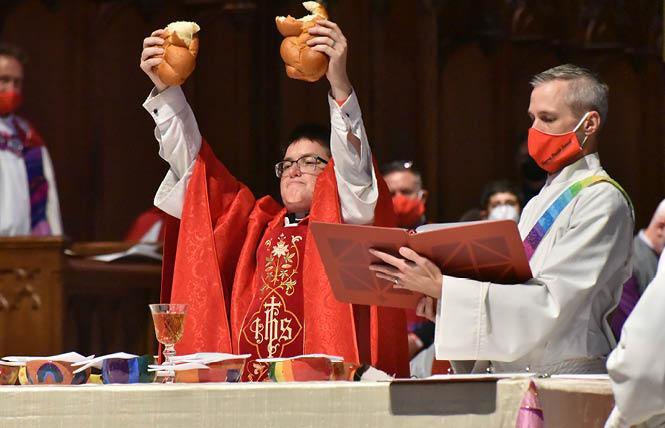 As LGBTQ History Month comes to a close, meet someone who made history very recently: the Reverend Dr. Megan Rohrer was ceremonially installed in September as a bishop of the Evangelical Lutheran Church in America, making Rohrer the first openly transgender bishop in a major Christian denomination.

In a half-hour conversation from St. John's Lutheran Church in Oakland last Friday, Rohrer spoke with me about their faith journey; about moving away from fear toward greater acceptance, love, and hope; and about — among other things — the significance of the Sierra Pacific Synod electing its first transgender bishop.

"If a trans person can be a bishop," Rohrer told Out in the Bay for this week's radio show and podcast, "that means there's nobody — literally no type of body — that can't be a faithful person, can't be a leader in the church, can't be someone who prays in the pews or receives communion at our altar."

While working in a shelter for abused children 20 years ago, a South Dakota 6-year-old told Rohrer that he had attempted suicide 12 times because "he had heard from a pulpit" that he might be "bad," and he thought he'd rather die than get "so bad" that he'd go to hell.

That "twisted my heart," said Rohrer, inspiring their 2001 move to Berkeley to attend the Pacific Lutheran Theological Seminary and become a pastor, so that the pulpit would have one more voice delivering love rather than fear.

As a pastor, Rohrer ministered to unhoused people and to marginalized youth, including queer youth, and was often seen in marches and street demonstrations, demanding racial and LGBTQ justice.

In their new role just shy of four months — bishop duties officially began July 1 — Rohrer said so far they are receiving fewer death threats than when they were a pastor. One odd early bishop task, though, was researching whether "any of our sister synods are in countries where I could be executed just for being a transgender person," said Rohrer, "not the normal bishop experience."

They relieve stress by roller-skating with their family at San Francisco's Church of 8 Wheels, a former Catholic church turned disco roller rink. On long drives traversing the synod's vast territory (Rohrer has put more than 7,000 miles on their car since July 1), they enjoy fast food stops where they have taught their kids the joy of dipping French fries in chocolate shakes.