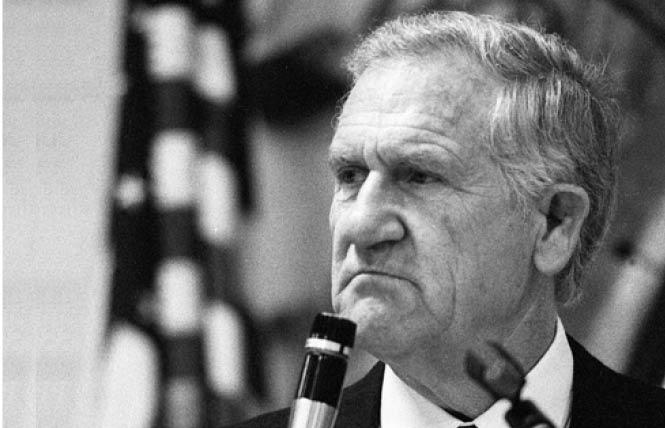 William E. Dannemeyer, an arch-conservative former California congressman who advocated quarantining people living with AIDS and once sued the Bay Area Reporter for libel, died July 9. He was 89.

The cause of death was complications of dementia, his son told the New York Times.

Dannemeyer represented Fullerton, in Orange County, and served seven terms in the House of Representatives. Among LGBTQs and others, he is best remembered for his shocking stances and regressive policies concerning banning abortion, opposing environmentalists, rolling back civil rights protections, declining to tax the rich, and most notably persecuting LGBTQ people and people with AIDS with a ferocity that will define his infamous legacy.

Younger voters may not remember a time when Orange County was broadly conservative; a time when affluent white voters loved Ronald Reagan and held on to a red island in their blue state with a wide margin of votes. Dannemeyer won each of his seven elections with at least a 70% margin in neighborhoods that have swung liberal since then, due to demographic shifts and changing social mores on the West Coast.

In San Francisco, Dannemeyer drew particular ire for his focused hatred against gays and people living with HIV and AIDS. In 1986, he was the only prominent politician to support convicted fraudster Lyndon LaRouche's movement to mandate statewide testing for HIV, including tracking of past sexual partners of those infected, full quarantine for those living with the disease, and barring people with AIDS from working in health care.

"A staunch anti-gay conservative, in 1986 he was the author of Proposition 109, which was considered far worse than Prop 64, the AIDS quarantine initiative by Lyndon LaRouche two years earlier," gay former Santa Clara County Supervisor Ken Yeager wrote in a Facebook post last week.

"Not only would have Prop 109 led to quarantine of HIV/AIDS patients, it would have required doctors to report the names of people they knew or reasonably believed to be infected," Yeager, now executive director of the BAYMEC Community Foundation, continued. "HIV patients would have been required by law to tell investigators the names of all sexual or drug partners since 1979, and then their past partners would be traced and contacted."

The statewide measure was soundly defeated by a margin of 71% to 29%, according to Wikipedia.

Hilarious as these extreme antics may seem in retrospect, gay former California Assemblyman Tom Ammiano pointed out to the B.A.R. that this kind of rhetoric put people's lives at risk.

"Oh my god, my boyfriend," Ammiano mock-screamed when the B.A.R. reached out to him via phone for comment.

"You know, when Joan Crawford died first, Bette Davis said, 'You're only supposed to speak good of the dead. She's dead. Good.' That about sums it up where Dannemeyer is concerned," he said.

Ammiano, a former San Francisco supervisor and school board member, also mentioned Dr. Lorraine Day, Dannemeyer's second wife, who's a Holocaust denier and noted AIDS persecutrix in her own right.

Day is a former orthopedic trauma surgeon and chief of orthopedic surgery at San Francisco General Hospital. According to her Wikipedia entry, she first became controversial when she advocated that patients be tested for AIDS prior to surgery. As a promoter of alternative medicine, she claimed to have discovered the cause and cure of cancer, which led Quackwatch to label her advice "untrustworthy and is particularly dangerous to people with cancer."

"She's one widow I have no sympathy for. They had so much anger. They were given a lot of power and that was very disturbing," Ammiano said. "We LGBT people work in camp and we tried everything we could to make them look ridiculous. But their views cost peoples' lives. My partner [Tim Curbo, now deceased] was ill with HIV and we were both schoolteachers. Anything they said was so generically homophobic, we knew they were implying we might give the kids AIDS. He's been dead 25 years and I'm still mad about it."

Libel suit
Ammiano's not the only one who's still mad. News of Dannemeyer's death reminded members of the B.A.R. newsroom that the congressman once sued the newspaper for $2 million for libel, following reports in the paper that he had behaved "like a live grenade," when speaking about HIV, and was "foaming at the mouth" with emotion about the crisis and his paranoid view of it.

Initial reports in September 1988 had the figure sought at $1 million, a number that the B.A.R. itself reported before having been served with the lawsuit. Upon receipt of the suit, this figure was adjusted in a later issue of the paper. The case would be tough for Dannemeyer because, as Leonard Graff of the National Gay Rights Advocates put it in an article on the B.A.R's front page on April 27, 1989, "Truth is an absolute defense to the charge of libel."

The late Bob Ross, founder and publisher of the B.A.R., noted at the time that the New York Times had said the same things about Dannemeyer and he hadn't chosen to sue them.

Dannemeyer represented himself in Sacramento County Superior Court in the matter, which saw his case dismissed in June 1989 when the judge sustained the demurrer: meaning that the court sided with the B.A.R., which claimed that the description of Dannemeyer was protected by the "fair comment" doctrine in California law as well as the First Amendment.

After the decision, Graff said, "Dannemeyer can't use frivolous lawsuits to intimidate the gay press."

The late Jean O'Leary, another lawyer with the NGRA said, "His credibility and influence will evaporate as the hard truth sinks in that he can't bully the gay community."

Dannemeyer's influence did indeed fade in subsequent years. The former congressman lost his bid for U.S. Senate in 1994 and resorted to propagating conspiracy theories including alleged murders committed by former president Bill Clinton, the killing of Laci Peterson by a Satanic cult (rather than her husband, Scott, who was convicted of the crime and is now on death row), and writing on his website that a vast Jewish conspiracy was working to exterminate Christianity the world over.