Hawaii is bursting with adventure 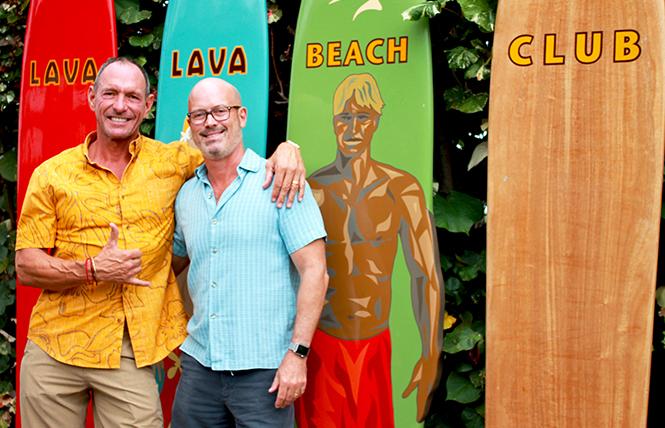 Eric von Platen Luder, left, and his husband, Scott Dodd, stand outside Lava Lava Beach Club, one of the restaurants and lodging businesses they own under the Luana Hospitality Group on the Island of Hawaii and Kauai. Photo: Heather Cassell

When the Kilauea volcano erupted in May, I was back stateside but immediately took in the news.

It was only days after I returned from the Island of Hawaii, commonly known as the Big Island, where locals and visitors were abuzz in anticipation about the pending eruption.

Pele, the Hawaiian goddess of fire and volcanoes, had been discontented for decades, but she was getting agitated in April when I visited.

The pending eruption was evident in the bubbling and spattering lava of the shield volcano at the crest of the Halema'uma'u Crater at the Kilauea Caldera. The Jaggar Museum at the Hawaii Volcanoes National Park remains closed. Hawaii magazine reported that it may not reopen, though most exhibits and artifacts have been moved.

That overflow wowed onlookers during the day and photographers who ventured out to the observatory in the middle of the night.

The early morning hours April 26 turned out to be a significant day and an once-in-a-lifetime event when I peered out at the crater alongside the other photographers. The lava had broken through the crust on the crater floor and overflowed onto the lava lake at Kilauea's summit. It was a signal of the eruption seven days later on May 3. (Portions of the park reopened in late September.)

The United States Geological Survey reported that the Halema'uma'u Crater at the Kilauea Caldera increased from 280 feet to approximately 1,600 feet and the diameter more than doubled.

It was the only period during my trip where the sun broke through the clouds for an entire day without one drop of rain.

During the day, I visited the museum and observatory and enjoyed a half-day bike tour around the volcano courtesy of Volcano Bike Tours (http://bikevolcano.com) on its Bike Volcano Summit Tour Special.

That evening I enjoyed dinner at the Volcano House's restaurant, the Rim (http://www.hawaiivolcanohouse.com/dining), where diners overlook the Halema'uma'u Crater. The hotel and restaurant reopened earlier this month.

Regular updates about the lava flow and Kilauea can be found on the Hawaii Volcanoes National Park website (http://www.nps.gov/havo/planyourvisit/lava2.htm).

Unfortunately, Puna, on the east side of the Big Island, didn't fair as well.

A popular local volcanic pool, Ahalanui Hot Pond, and the beloved Kapoho Bay were overcome by the lava flow. There is now a new black sand beach created by it.

Nearly 875 acres was added to the island, according to media reports.

The east side of the island is known for its "hippie vibe" because it attracts many artists, healers, spiritualists, and people who simply live off the grid. It has a significant LGBT population.

The historic nonprofit retreat, Kalani Oceanside Retreat (http://www.FB.com/Kalani.Oceanside), founded by gay artist Richard Koob and his late partner, Earnest Morgan, on what has been dubbed the "yoga coast" temporarily closed due to Kilauea's lava flows, according to the retreat's Facebook page.

The 120-acre retreat is close to the famous Kehena Black Sand Beach in Pahoa. It's a nude beach and also known as the unofficial gay beach. So far, the beach has survived the lava flow. It is on the way to the famed Uncle Robert's Awa Bar and Farmers Market (https://sites.google.com/site/unclesawaclub/).

The bar and market reside on the edge of the lava flow that settled there between 1983 and 1990. Guests can leave homages at the altar for Pele that is out on the lava rocks. On Wednesday nights people party it up at Uncle Robert's Night Market.

"I especially love just how vibrant the nature is," said Jared Sam, a 42-year-old gay man who was the retail manager as well as a yoga instructor, massage therapist, and retreat facilitator at the now temporarily closed Kalani Oceanside Retreat. "I love the community.

"I just love how sustainable and healthy everything is here," he added. "It's almost like we are forced to take a close look at ourselves because we can't drive away."

Sam has worked at the retreat since 1997.

Gays love Hawaii
Despite the constant threat of Pele's ire, LGBT Hawaiians on the Big Island love it.

They boast of the lifestyle, which is largely focused on outdoor activities. Locals and visitors love hiking trips that include waterfalls, rainbows, and views. Some of the best snorkeling and diving in the United States is on the Island of Hawaii, along with swimming with gentle giant manta rays at night, dolphins in the morning, and turtles throughout the day.

So-called Punatics love the east side of the island for its raw nature untouched by commercial tourism and its free-spirited atmosphere.

Marrow started the tour company with his life and business partner, Tony De Lellis, 43, nearly 15 years ago with the Secrets of Puna tour. Paul Gallagher, a 38-year-old gay man, was my tour guide.

Kona, on the west side, is more commercial and mainstream, boasting two gay bars, My Bar (http://www.mybarkona.com) and the Mask-querade Bar (http://themask-queradebar.com).

Marrow, De Lellis, and several of their friends decamped from Los Angeles to the Island of Hawaii in 2003, leaving behind the hustle and bustle.

One of the aspects of Hawaiian culture that is so appealing to many LGBT travelers is the diversity and openness, people I spoke with said.

"Hawaii, the island itself, is just so open to so many different cultures and diversity," said Marrow. "Nobody really cares." 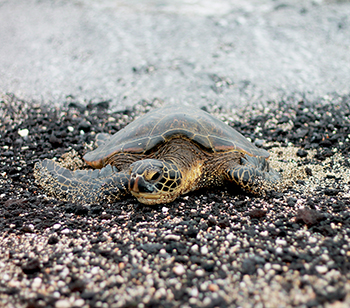 A turtle rests on the black and white sand beach on the Kohala Coast on the Island of Hawaii. Photo: Heather Cassell

While Maui and Oahu receive much of LGBT travelers' attention, LGBT hospitality and tourism experts have noticed an increase in LGBT travelers to the island.

"We are seeing so many more gay travelers on the Big Island," said Eric von Platen Luder, 60, who owns Luana Hospitality Group with his husband, Scott Dodd, 55. The couple have been together for 26 years.

The Luana Hospitality Group owns and operates several restaurants and four villas off the side of Lava Lava Beach Club (http://lavalavabeachclub.com) on the west side of the island. The boutique hospitality company's restaurants include Huggo's (http://huggos.com), which turns 50 in 2019; On the Rocks (https://huggosontherocks.com), which turned 20 this year; Paradise Gourmet Catering (http://paradisegourmet.com); and its newest ventures the clubs on Hawaii and Kauai.

The men believe Hawaii is being rediscovered again by travelers, including LGBT visitors, because of what it has to offer, such as unique black and green sand beaches, volcanoes, outdoor adventure, and the secluded feel of the island even at the larger resorts.

"We are seeing a lot more gays here and for the same reason that tourism on the Big Island has stepped up anyway because it's more adventure travel," von Platen Luder said. "On the west side it does have all of the major resorts, but they aren't all lined up on the beach. It has a much more remote feel to it."

Where to stay
I started my Hawaiian adventures at the Grand Naniloa Hotel Hilo (http://www.grandnaniloahilo.com) where I had view overlooking Hilo Bay, the Japanese gardens, and Liliuokalani Park and Gardens in the shadow of the Mauna Loa Volcano.

It is is the world's largest active volcano, rising 13,100 feet above sea level, and makes up about 85 percent of the Island of Hawaii. Below the sea the volcano is 26,200 feet. From its base below the sea to its summit it is 55,700 feet, making it taller than Mount Everest, said Gallagher.

The tour company owns a shop at the Grand Naniloa Hotel Hilo where it operates all of the hotel's concierge services as well as its 18 tours and zip-lining, he said.

On the Kilauea Volcano, I stayed at 5th Street Ohana (http://www.5thstohana.com/en-us), a vacation rental owned by Emma Spencer Living.

There is also the Volcano Men's Retreat (http://www.volcanomensretreat.com) in the area.
On the west side, I stayed at Lava Lava Beach Club's cottages and toured the Sheraton Kona Resort and Spa at Keauhou Bay (http://www.marriott.com/hotels/travel/koasi-sheraton-kona-resort-and-spa-at-keauhou-bay).

The charming cottages feature an indoor and outdoor shower (if you don't mind company with the geckos), a rarity on the Hawaiian Islands.

I enjoyed a long walk along the beach, which wasn't very populated, and met several turtles along the way.

The Sheraton hosts a nighttime glass bottom boat tour with a diving and swimming experience with the manta rays and a manta ray learning center. It's also walking distance from the Fair Wind Cruise dock.

In Volcano, I enjoyed a quick bite to eat at Volcano's Lava Rock Cafe (http://www.lavarock.cafe). I had an enjoyable breakfast at the Kilauea Lodge (http://www.kilauealodge.com/restaurant) before venturing down the volcano to the Kohala Coast on the west side of the island.

I highly recommend breakfast at Kilauea Lodge. The food is good and served in a charming atmosphere.

On the west side, I enjoyed dinner at the Lava Lava Beach Club and On the Rocks in Kona, followed by drinks at My Bar.

What to do
No trip is complete without visiting the volcanoes either by car, boat, or helicopter. Even six months after Kilauea's eruption there is still some lava flow and the volcanoes are still something to see.

The Island of Hawaii is — and isn't — known for its beaches. While much of the island's beaches are lava rock, the island is one of the rare places in the world that has black and green sand beaches along with white sand beaches.

The island also boasts the southernmost point of the United States at Ka Lae, commonly known as South Point. It's a popular spot for adventurers to cliff dive.

South Point is also near Papakolea Beach, one of the world's four green sand beaches.

Hawaii has a number of black sand beaches, but Punalu'u Beach is the most popular.

All of the guided tours were exceptional. The Mauna Loa factory tour was fun and quick. There aren't any discounts for traveling all the way to the island to purchase the delicious nuts, but you get free samples.

Getting there and getting around
I flew Hawaiian Airlines to Hilo. The airline flies regularly from all three Bay Area airports to the Island of Hawaii's two main airports — Hilo on the east side and Kona on the west side.

Once I landed, I rented a car. It is the best way to explore Hawaii, which can take several hours to get from one destination to the next.