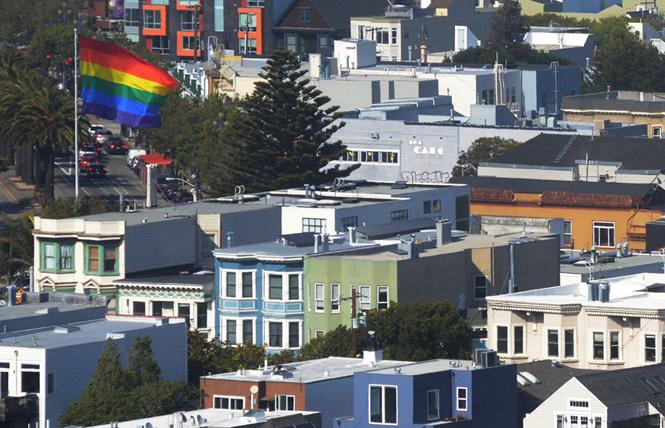 A new survey of LGBTQ older adults in San Francisco found that many were affected during the COVID pandemic, from being lonely to not being able to access services. Photo: Rick Gerharter

Despite facing decades of discrimination and living through the horrors of the early years of the AIDS pandemic, LGBTQ seniors have long proved to be resilient. Nevertheless, those experiences have had lasting impacts on their health and mental well-being, with many queer elders struggling with isolation and loneliness.

A survey conducted among San Francisco's LGBTQ senior community found similar results during the COVID-19 pandemic. While most were able to adjust to the various safety protocols local officials imposed to stem the spread of the virus, from mask-wearing to limiting in-person activities, many suffered from depression and felt more alone than ever before.

"I think people are more resilient than I might have expected," said Tom Nolan, a manager of special projects at the San Francisco Department of Disability and Aging Services.

Nolan, a gay senior himself at 76, said the survey findings point to the need for more mental health services for LGBTQ older adults that are provided in a culturally appropriate manner sensitive to their life experiences.

"The big thing that came through for me was the rates of depression, loneliness, anxiety, and everything. I hope it translates into more funding for agencies that are going to do this work," he said.

Since the beginning of the health crisis there has been no accurate data on the impact of COVID within the LGBTQ community due to myriad issues with the collection of sexual orientation and gender identity demographics, as the Bay Area Reporter has extensively covered. Researchers have tried to extrapolate what they can from the limited SOGI data that is available, while various agencies focused on the LGBTQ community have conducted their own studies into COVID's impacts.

Such was the case with the LGBTQ Aging Research Partnership that formed in San Francisco. It included Nolan; Jesus Guillen, a gay man and long-term HIV survivor who chairs the San Francisco HIV and Aging workgroup for the city's health department; Marcy Adelman, Ph.D., a lesbian who co-founded LGBTQ senior services agency Openhouse; and the nonprofit's former executive director Karyn Skultety, Ph.D., who is bisexual and stepped down this summer due to moving out of state with her family.

They worked with Health Management Associates, a national research organization, to launch the online survey of San Francisco's older LGBTQ residents in February. Half of its $20,000 cost came from the city, with the LGBTQ philanthropic agency Horizons Foundation and the Bob Ross Foundation, created by the late publisher of the B.A.R., both contributing $5,000.

Its focus was on how the survey participants' physical and emotional health had changed due COVID-19 and having to adhere to the stay-at-home mandate imposed last March. It also inquired how well they were able to access needed services.

The findings are based on the 500 people over the age of 50 who answered the initial survey questions as well as a follow up survey with 107 of them conducted in April when most seniors could get vaccinated against the virus. By that point, 94% of the second survey participants had been inoculated.

A supermajority, over 92%, identified as lesbian, gay, or homosexual. Almost 4% identified as bisexual, and almost 4% as queer. A total of 10% of the respondents fell into the category of transgender or gender-nonconforming.

Near 20% of the survey participants were able to meet their basic needs with some help, while 9% reported they didn't have enough income to meet their needs. During COVID, the percent of older adults with self-reported symptoms of depression increased to 13.5%, almost three times more than pre-COVID, noted the survey report. 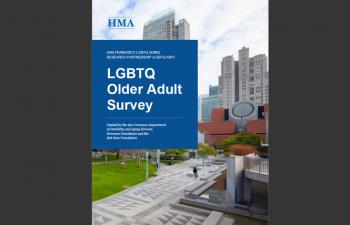 Feeling lonely
People of color and those with a disability had the highest percentages of possible depression, both during and prior to COVID and the stay-at-home mandate. More than one in four TGNC respondents and respondents who live alone may have had depression during COVID, according to the survey.

Nearly 8% of the respondents said they had seriously thought about committing suicide in the past 12 months. During COVID, nearly 65% reported feeling lonelier than before the pandemic began. Over 80% said they felt isolated from others, with almost 40% saying they often felt isolated.

While a majority of the respondents turned to a close friend or their partner or spouse for emotional support, 12% said they had "no one" to reach out to for solace. Cisgender men were most likely to say they were on their own in terms of emotional support.

During COVID 29% who wanted to receive mental health services via appointments over the phone or video (telehealth) were able to get them. Another 14% said they wanted such telehealth services but could not get them. ?

Mental health counseling was the highest unmet need — at almost 17% of all respondents — that the survey found. POC respondents reported higher levels of unmet needs for counseling, medical care, technology and medication assistance than any other group.

People living with HIV said they most needed economic help, while people with disabilities reported the highest need for assistance with chores.

"This survey provides unsurprising yet valuable information about the need for culturally appropriate mental health services for LGBTQ+ older adults, especially those who identify as Black Indigenous People of Color," stated Shireen McSpadden, who is bisexual and was executive director of the city's aging department at the time the report was conducted but is now director of the city's Department of Homelessness and Supportive Services.

About 75% reported connecting by video chat. More than half (52%) said they had attended live virtual events in order to have social connections.

"As a gay senior myself, technology doesn't come really easily to me. I have to say over the past year I have become much better at it," said Nolan, who now regularly uses Zoom and other virtual meeting platforms. "The survey showed a lot of people were never on it before. They had to become familiar with it to communicate with seniors and family."

Another upside in the survey was that 80% of the older adults noted something positive that came out of the pandemic for them. Their answers ranged from being able to spend more time with loved ones and being more creative to picking up a new hobby and having more time to reflect on their lives.

As for the roughly 100 people who were contacted again in the spring, 68% were feeling better due to the vaccines being available. Most felt more optimistic, safer, relieved, and less stressed.

Conducted before the Delta variant took hold this summer and led to renewed safety protocols being imposed, the follow up respondents reported being more comfortable going out in public, meeting up with friends and family, riding public transportation, and shopping for groceries again at the store.

Nolan said the survey findings will be used to guide his department's services going forward and help LGBTQ senior advocates as they push for more resources from various governmental agencies. He noted that one survey finding showed many of the respondents are fearful the nonprofits they have come to rely upon will not survive the pandemic.

"They are concerned the organizations they have counted on in the past for social needs might not survive past COVID," said Nolan.

The full report can be found on Openhouse's website.