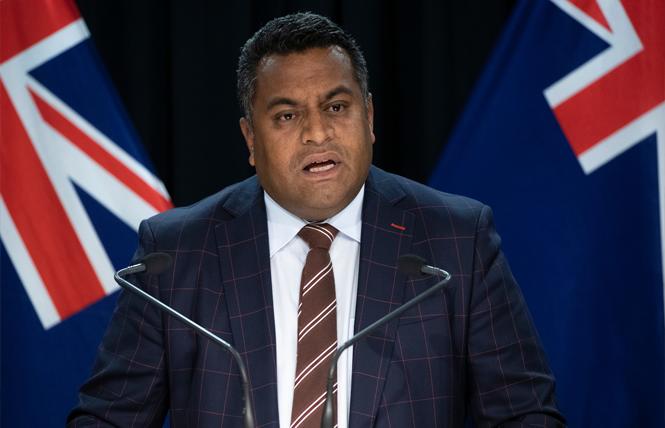 New Zealand could be the next country to ban conversion therapy.

"Those who have experienced conversion practices talk about ongoing mental health distress, depression, shame, and stigma, and even suicidal thoughts," said Faafoi, who is an ally and a member of Prime Minister Jacinda Ardern's Labor Party.

Conversion therapy survivor and activist Shaneel Lal praised the bill's introduction, adding that the practice has "pushed and driven so many queer people into a life of pain and misery and death."

They "[thinking that] God will never forgive them for it," they said. "Every single story that I've heard of conversion therapy, victims have questioned whether it is worth living — and I was one of those people."

Conversion therapy is the practice of attempting to convert or suppress a person's sexual orientation or gender identity to fit into mainstream society.

The practice has been widely condemned by the United Nations, World Health Organization, more than 60 medical and mental health organizations, and human rights and LGBTQ rights organizations.

"Conversion practices have no place in modern New Zealand," Faafoi said in a statement. "They are based on the false belief that any person's sexual orientation, gender identity, or gender expression is broken and in need of fixing

Lal praised the bill but was also critical of some of the legislation's vague wording.

Lal told the Guardian "serious harm" implies "that it is OK to cause harm, if it is not serious harm" and the language could create a barrier for survivors gathering evidence for cases. They had a similar argument for the use of "intent."

The Guardian reported that experts anticipate the bill to pass. If it becomes law, New Zealand will join Brazil, Ecuador, Germany, and Malta banning the practice. Conversion therapy has also been banned in 20 states in the U.S., including California, which prohibits the practice on minors but not adults.

The new country-of-origin information report, "Sexual Orientation and Gender Identity and Expression in Guatemala," co-produced by ORAM and MNU and published July 29, demonstrates how Guatemala's government actions and social barriers work together to enforce discrimination against LGBTQ people in the Central American country. COI reports are cornerstone resources in the decision-making process of asylum seekers' cases.

The 37-page report's goal is to provide context to asylum seeker advocates and adjudicators around LGBTQ asylum seekers' fleeing persecution in Guatemala to help them assess their claims, according to the July 29 joint news release from the ORAM and MNU.

The report concluded that Guatemala's treatment of its LGBTQ community is "far from adequate."

Stephen Meili, director of the MNU's Immigration and Human Rights Clinic, called the report an "important tool" for refugee and asylum seeker advocates.

The report highlights Vice President Kamala Harris' April statements to Guatemalan President Alejandro Giammattei about "root causes" of migration and Human Rights Watch's March report, "It's What Happens When You Look Like This: Violence and Discrimination LGBT People in Guatemala," about LGBTQ rights in the Central American country.

Harris and the three organizations clearly state violence against LGBTQ people is one of the root causes of immigration to the United States from Guatemala.

"There are also longstanding issues that are often called the 'root causes' of immigration," said Harris during a virtual meeting with Giammattei, reported the Washington Blade. "We are looking at the issue of poverty and the lack, therefore, of economic opportunities; the issue of extreme weather conditions and the lack of climate adaptation; as well as corruption and the lack of good governance; and violence against women, Indigenous people, LGBTQ people, and Afro-descendants."

Guatemala is one of the Northern Triangle countries that include El Salvador and Honduras. For more than a decade thousands of migrants — many women and children — fled gang violence, government corruption, and economic insecurity, coming to the U.S.-Mexico border on their own in hopes of a better future.

As corruption, poverty, and violence worsened, migrants banded together in large groups to make the treacherous trip toward the U.S.-Mexico border. That made headlines in 2018. Still, LGBTQ migrants, a small group within the caravan, weren't safe. To protect themselves, they formed their own caravan, separating from the larger caravan, and traveled swiftly to the U.S.-Mexico border.

Many of those migrants continue to wait in Mexico for their asylum claims to be processed today.

Marginalized
LGBTQ Guatemalans are among one of the most "marginalized sectors" of Guatemalan society, according to a 2019 United Nations report. According to the Observatory on the Murder of Trans Persons, Guatemala ranks sixth in the world in murders of transgender individuals just behind Brazil, Mexico, and Colombia.

Both sought help from Guatemala's attorney general's office over threats they were receiving. Guatemala's first openly LGBTQ Congress members, Aldo Davila and Sandra Moran Reyes, both received a constant thread of threats. Moran Reyes, who also received many threats, did not run for reelection in 2019.

Earlier this year, Davila, a vocal critic of Giammattei, survived an attack in Guatemala City that left one of the gunmen wounded and the others fleeing the scene thanks to Davila's security team, reported the Associated Press. Davila was shaken but unharmed, the media outlet reported.

The Guatemalan Public Ministry is responsible for any investigation into the incident, Davila told the Blade, but he had little faith in the agency.

"There should be one in theory, but the Public Ministry in Guatemala is not the best, or the most trustworthy (institution.)," he said.

The global pandemic and new administrations in El Salvador, Guatemala, and the U.S. in 2019 and 2020 have not immediately improved migrants' situation. Hondurans will go to the polls November 28.

Going backward
In 2016, the AP reported that Guatemala was progressing quietly toward protecting LGBTQ rights. Today, it is a much different story. Instead of protecting queer Guatemalans, the Central American country's government is attempting to further criminalize LGBTQ people, the reports note.

Guatemala decriminalized homosexuality in 1871, but it is still not socially acceptable, according to ORAM and UNM's report. Both reports revealed LGBTQ Guatemalans virtually have no legal protections and cannot turn to the government or law enforcement as officers further abuse queer people.