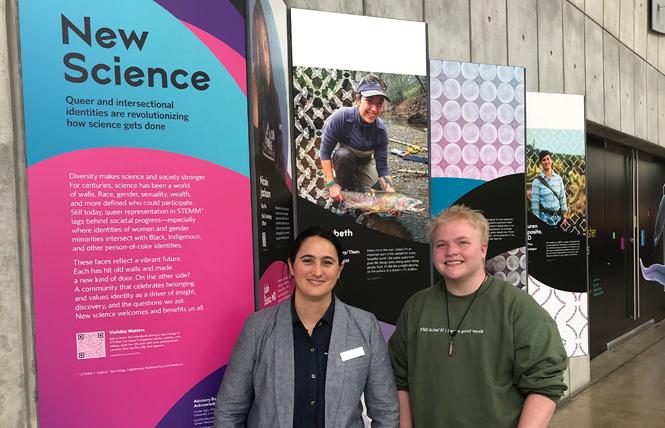 A groundbreaking exhibit at the California Academy of Sciences in San Francisco's Golden Gate Park is highlighting the work of queer scientists. It is believed to be the first such display in a museum setting to showcase LGBTQ+ women and gender minorities of color working in STEMM professions.

The acronym is short for science, technology, engineering, math, and medicine. "New Science: The Academy Exhibit" can be found mounted on a wall of the main floor to the right of The Swamp gallery that houses Claude, an albino alligator.

The first of the eight colorful panels declares, "Queer and intersectional identities are revolutionizing how science gets done." On the subsequent panels are photos and brief bios of 11 scientists with QR codes that visitors can use to bring up fuller information about each individual on their smartphones.

Among the featured STEMM professionals are herpetologist Chelsea Connor, a Black queer woman from Dominica, and environmental scientist Oliver Nguyen, who is trans nonbinary and from a Vietnamese American family. An additional 12 out scientists are featured on the accompanying website for the exhibit, which officially launched June 24 during Pride Month.

The exhibitory project is derived from a visibility campaign called "500 Queer Scientists" that Lauren Esposito, Ph.D., a curator of arachnology at the Cal Academy, launched in 2018 to foster a sense of community among LGBTQ people in the sciences.

"It is a topic I feel passionate about," said Esposito, who six years ago became the first out LGBTQ curator in charge of a research lab at the 168-year-old institution.

Esposito, 39, who is queer and resides in San Francisco, grew up along the border in Texas. After earning her doctorate in New York, she came west in 2011 to do her post doc at UC Berkeley.

Hired by the Cal Academy to study spiders and scorpions in the field, Esposito felt isolated and alone as a queer scientist. Looking for a way to mirror her professional pursuits with her personal interests and identity, Esposito landed on the idea of profiling queer STEMM professionals on a website accessible to anyone in the world.

Located here, it is nearing 1,560 profiles of LGBTQ scientists from across the globe. Meanwhile, the project has reached roughly 2,500 people via its social media accounts.

"We come together in ways we may not feel we can do in our institutions and labs," said Esposito. "I am just the steward, the shepherd of the website."

Telling stories
In February the Association of Science and Technology Centers awarded the Cal Academy a $30,000 IF/THEN Gender Equity Grant Moonshot Award to help fund the exhibit. It is constructed in such a way that other science institutions and museums can easily replicate it from materials shared for free via an online platform that will launch in August.

"The goal was to build something people would want in their museum," said Esposito, adding that, "One of the biggest things for us was to have people tell their own story in their own words."

She also wanted to present the subjects in a celebratory manner. Each was asked to send in a self-portrait for use in the display, with the visuals incorporating Easter eggs that relate to the person's research. Thus, Anolis lizards can be seen in the wallpaper-like design behind Connor's photo, and scorpion tails are incorporated into Esposito's own panel in the exhibit.

Assisting on the project was the first-ever class of 13 STARS interns aged 18 to 24 at the Exploratorium along San Francisco's Embarcadero. The acronym stands for Striving for Trans-inclusion and Anti-Racism in Science learning, and the interns helped record interviews with queer scientists and worked on accompanying materials for the exhibit.

"It was fantastic to work with young people who are exactly the people I want to reach with this exhibit," said Esposito.

Intern and Solano Community College student Felix Duley, 18, a bisexual transgender man who lives in Fairfield, happened to stop by the Cal Academy to see the exhibit in early July at the same time the Bay Area Reporter was interviewing Esposito about it.

"I could feel the air being pushed out of me," said Duley about encountering it for the first time. "As a younger person seeing this, I'd be ridiculously overwhelmed and have all good feelings."

It will hopefully open up a realm of professional possibilities for other LGBTQ youth interested in STEMM fields, said Duley, who shares Esposito's love of spiders, as he has 12 tarantulas and one jumping spider at home.

Until he learned about Esposito's project, Duley said, "I wasn't aware there was a population of queer people visibly in the science world."

November 18 is now marked as the International Day of LGBTQIA+ People in STEM. It corresponds to the date in 1960 when the late gay American astronomer Frank Kameny filed a petition with the U.S. Supreme Court seeking more time to wage his legal fight against the federal government for being fired and banned from future employment due to his sexual orientation.

According to a 2020 research paper, LGBTQ+ people are 17% to 21% less represented in STEMM fields than expected based on their prevalence in the U.S. population. Through the museum exhibit and the 500 Queer Scientists virtual project, Esposito aims to throw open the closet door for out professionals working in, and LGBTQ youth interested in, pursuing STEMM careers.

"I want people to know they have a space here," said Esposito, "and their perspective is important if we are going to solve the challenges the world is facing."

The exhibit will be viewable at the Cal Academy through at least December.

To learn more about the exhibit online click here.