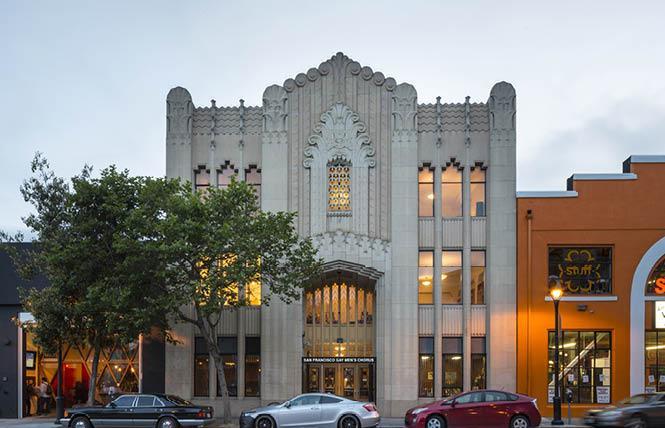 The offices of the San Francisco Gay Men's Chorus, housed at its National LGBTQ Arts Center in San Francisco, closed out of an "abundance of caution" following harsh criticism of its video by InfoWars, a right-wing site run by Alex Jones. Photo: Jeff Zaruba

The office of the San Francisco Gay Men's Chorus is closed "out of an abundance of caution" after members started receiving a barrage of negative messages, including death threats, in response to a mischaracterization of a song the group posted to YouTube, its executive director said Thursday.

Chris Verdugo, a gay man who is the executive director of the chorus, told the Bay Area Reporter July 8 that the website InfoWars — run by far-right conspiracy theorist Alex Jones — called the song "A Message from the Gay Community" "pedophilic" in an online article July 7. That apparently unleashed the vitriol.

"The threat that stuck in my head," Verdugo said of the harassing messages he fielded, "was, 'We're gonna put lead in your head.' That was quite frightening."

The chorus posted its video to YouTube last week.

Verdugo said that the song includes the words "we're coming for your children" to evoke long-standing fears that gay men will convert children to homosexuality, for the purpose of exposing those fears. The real conversion gay men are interested in, Verdugo said, is teaching others to be "tolerant and fair."

That message was lost on, or deliberately misrepresented by, InfoWars, Verdugo said.

"The song is tongue-in-cheek, satirical, and I'd say nuanced except it's not even that," Verdugo said. "Since Anita Bryant, there's been people who think there is a gay agenda; that pedophiles will convert children to become homosexuals. That's not true, but we do have a gay agenda — teaching children to be tolerant and fair.

Anita Bryant, of course, is the anti-gay activist who in the 1970s ran the Save Our Children campaign to overturn equal protection laws nationwide. Bryant served as brand ambassador for the Florida Citrus Commission from 1969 to 1980. In 1977, during her successful campaign to repeal an anti-discrimination ordinance in Dade County, Florida, the gay community retaliated by organizing a boycott of orange juice.

Bryant once stated "As a mother, I know that homosexuals cannot biologically reproduce children; therefore, they must recruit our children."

Verdugo said that members of the chorus and administration have been inundated with phone calls and messages, which "span the gamut from just people being hateful, which we're accustomed to, to people saying we should be killed, and more references to Hitler and the Nazis than I have ever seen in my life."

Verdugo said that the office, housed in the chorus' National LGBTQ Center for the Arts, will be closed until further notice. An investigator from the San Francisco Police Department is working on the case, he added, and the chorus has been in touch with the Federal Bureau of Investigation's San Francisco field office.

The field office acknowledged that the incident was reported to it.

"I can confirm that this incident was reported to law enforcement, including the FBI," the FBI San Francisco media team stated in an email. "We will be unable to comment further."

After the initial publication of this article, the SFPD confirmed receiving reports.

"The Departments Special Investigations Division (SID) is investigating reported incidents of emails containing hate speech and possible threats," Sergeant Michael Andraychak stated in an email. "These are apparently related to a video recently published by the chorus."

As the B.A.R. previously reported, GLAAD found that LGBTQs face more online hate and harassment than any minority group. Some of this is fueled by false equivalencies between homosexuality and pedophilia, as GLAAD found in a March study.

As the B.A.R. reported last year, gay state Senator Scott Wiener (D-San Francisco) was the subject of death threats for introducing a bill that InfoWars falsely stated would "decriminalize adult men having sex with boys."

This year, Wiener is aiming to secure $1.7 million in the state's budget for the San Francisco Gay Men's Chorus's National LGBTQ Center for the Arts on Valencia Street. The funds would be used for a new air circulation and filtration system; Governor Gavin Newsom still needs to sign off on the final budget.


Updated, 7/13/21: This article has been updated with comments from SFPD.