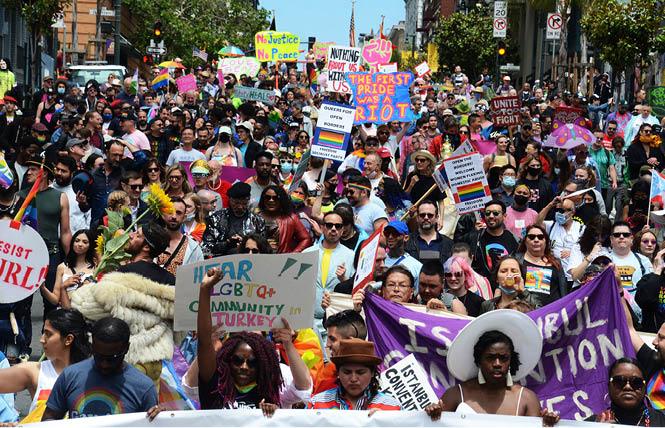 San Francisco's second People's March & Rally of the COVID-19 era on Sunday, June 27 was a jubilant celebration that echoed the spirit of the 1970 San Francisco Gay Liberation March.

Everyone was invited to "Unite to Fight," down Polk Street toward Civic Center, a mile-long route similar to that of the revolutionary moment in queer history 51 years ago that marked the first anniversary of the 1969 Stonewall riots in New York City, long considered the birth of the modern LGBTQ rights movement.

This year's march was smaller than last year's, with several hundred people participating. Among the contingent of rebels and revelers (two blocks deep at its largest and most vibrant) chanting "Whose streets?" "Our streets!" and "Give it to the people..." "Power!" was Elizabeth Kamya, a 24-year-old Black queer woman living and working in the San Francisco as a union organizer, who was eager to march in her first Pride with the International Federation of Professional and Technical Engineers Local 21.

"I stand in solidarity to advocate for basic human needs and dignities and bring attention to inequities, especially with COVID," she said. Then, she summed up the sentiment of the day with a simple, yet no less thoughtful: "We ain't free till we all free."

The People's March started last year when the San Francisco LGBT Pride Celebration Committee's annual parade was canceled due to the pandemic. This year, SF Pride also had to scrap its huge parade because of the health crisis, leading People's March organizers to plan their second event.

The resilience of the LGBTQ community was unwaveringly evident as friends, family, and allies from all over the Bay Area came together with tourists and residents and business owners from the Polk Gulch, Lower Nob Hill, and Tenderloin neighborhoods to mark and celebrate the 2021 version of Pride in open and expressive fashion and roaring style.

Said Matt Haney, supervisor for District 6, "the spirit of Pride is alive and strong [here]," while Dino Bocala, the gay co-owner of SF Plants at Polk and California streets, was happy to see every passerby.

"This was a surprise," Bocala, 57, shared after the Bay Area Reporter spotted him watching the festivities from the sidewalk. The 30-year San Francisco resident was "ecstatic, as the Polk has always been inclusive. I didn't know about this march, but I am excited to see it."

Organized by drag star Juanita MORE! and community artivist Alex U. Inn, the second iteration sought to reboot the original march's idea to center trans and queer Black and Indigenous community members, as well as trans and queer people of color, and educate and empower the next generation of LGBTQ leaders.

"I like that this year is non-corporate," said Shalom Kimble, 44, a San Francisco special education teacher also known as Guard FreeQueen Deee-Lite of The Sisters of Perpetual Indulgence. "It started with us, and it's gotta continue with us."

The absence of large corporate parties pulling focus from individuality down Market Street, which arguably might have redirected Pride marches away from their freedom-minded roots toward commodification, did make many hearts grow fonder of the truest meaning of occasion.

"It's important to have demonstration during Pride," said Matthew Denney, 33, a queer paralegal from Lower Nob Hill and first-time participant, who walks with crutches. "This march is less corporate, and in years past, the parade has been so big and full of people it was overwhelming."

Acknowledge ancestors, honor yourself
The rally in front of San Francisco City Hall kicked off with the melody and song of "Lift Every Voice and Sing," the Black national anthem, which suited Ayla Richards just fine. Said the 36-year-old bisexual San Francisco massage therapist, "Black and Brown people, everybody needs their equal rights."

Speakers urged attendees to honor those who came before them.

"Join with me and acknowledge our ancestors, especially the Ramaytush Ohlone people, whose land you stand on today," said drag performer Landa Lakes during her remarks. "You have to acknowledge that before the first foot stepped on this land [to colonize], we were here, we were queer, we existed."

The Chickasaw activist and artist then led the crowd in facing east, south, west, and north to honor their families (given and chosen), the trailblazers who came before them, the original two-spirit people of the land who had the respect of their society, as well as their own voices.

"You have a voice, and you need to use it, whatever you do," Lakes urged, before adding, "Chokma'shki" or "Thank you" in Chickasaw, which she also encouraged those listening to repeat in response four times.

The command of one's voice requires confidence and self-assuredness, authenticity, and a willingness to be vulnerable in front of the entire planet. Gia Córdova, 24, is associate director of Gender Justice Leadership Programs at Oakland's Transgender Law Center. A self-described nonbinary Latina trans girl, she recognized that in spite of the world's violence, the People's March & Rally was, "a reminder that we can party and support our people because there is no Pride without trans youth. But let's be clear: Trans youth have all the power to change the world, and we've been changing the world."

"I found today to be very moving," she said. "I got this feeling of communal acceptance that was very beautiful. I loved how honest and powerful the speakers were at the rally, and it impressed upon me how far we are in Peru from achieving this level of naturalness."

Looking to 2022
Gauging the success of the People's March & Rally is a tall task. Based on interactions with attendees turning up for the second year in a row, re-inventing the tradition has reclaimed it, for nothing can beat the act of showing up.

"I'm back to keep the meaning and spirit of Pride for us. I am who I am. We are who we are, and we are here," said Kostas Goulas, 36, a gay man from San Francisco. "Without them, without trans people and queer people of color, the front line, none of this would be possible. Queer power moved our world higher and forward."

Still, while gay state Senator Scott Wiener (D-San Francisco) sees the future of Pride back on Market Street as soon as 2022, he also understands progress, change, and freedom will come, when more people get involved.

"Last year was no bells and whistles and very intense during COVID," said Wiener. "We who have privilege need to look out for the rest of the community."

Organizers will continue to raise money to cover the costs of the event. As of press time, the GoFundMe fundraiser had raised $1,568 of a $5,000 goal>.

San Francisco rang in a safe Pride weekend amid smaller crowds
Sign up!