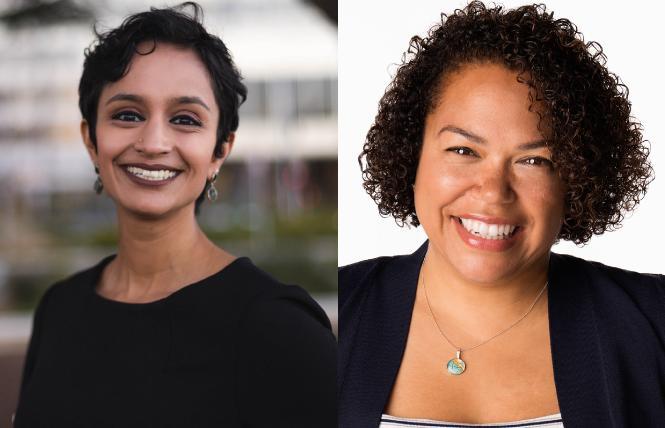 Voters in Alameda, San Leandro, and a portion of Oakland head to the polls Tuesday, June 29, or have until then to mail in their ballots, to elect a new Assembly member to represent them in Sacramento. Eight candidates are running in the special election for the 18th Assembly District seat in Alameda County.

It has been vacant since Rob Bonta (D) resigned earlier this year following Governor Gavin Newsom naming him to be the state's attorney general. His wife, Mia Bonta, currently the Alameda Unified School Board president, is seen as the frontrunner in the race, with a host of the state's top Democratic officials backing her campaign. Outside groups, meanwhile, are funneling hundreds of thousands of dollars toward supporting her candidacy.

Statewide LGBTQ advocacy organization Equality California earlier this month endorsed both Bonta, 49, a Black Latina who grew up on the East Coast, and social justice attorney Janani Ramachandran, an Oakland resident who is queer and lesbian. A relative political unknown before jumping into the race, Ramachandran, 29, would be California's first South Asian assemblywoman, as she is of South Indian ancestry.

She has staked out a position of claiming to be the most progressive candidate in the race, with a host of progressive leaders backing her candidacy. One of her signature policies would be to raise the state minimum wage to $22 by 2022.

"People realizing they need two or three jobs to make ends meet is not sustainable economically. Raising the minimum wage will build a greater middle class and save the state on its rate of spending on social services and safety net programs," said Ramachandran. "Lifting people out of poverty benefits everybody, including small businesses. Data on those cities that raised their minimum wage to $15 showed they suffered net zero job loss."

With the ability for a candidate to win the seat outright and avoid a runoff election by garnering more than 50% of the vote next week, Ramachandran is hopeful of drawing enough support to deny Bonta being able to claim victory. She hopes to advance to the August 31 contest as one of the top two vote-getters in the June 29 election.

Also mounting a strong bid is Alameda Vice Mayor Malia Vella, 36, who is the first Filipina elected to her City Council. She could also thwart Bonta's winning the seat outright, as happened in several special elections this year for open Southern California legislative seats, and land in the runoff election later this summer.

Two out Democratic male elected officials are also seeking the Assembly seat but are considered underdogs in the race. Gay San Leandro Unified School District Board of Education member James Aguilar, who turns 22 in November, would be the youngest person serving in the Legislature if elected, eclipsing bisexual Assemblyman Alex Lee (D-San Jose) by several years.

Gay San Leandro City Councilman Victor Aguilar Jr. (no relation to James Aguilar), 42, is also running. Should either Aguilar win the seat, they would return gay Latino leadership to the Legislature, as currently there are only two lesbian Latina lawmakers in the eight-person Legislative LGBTQ Caucus. 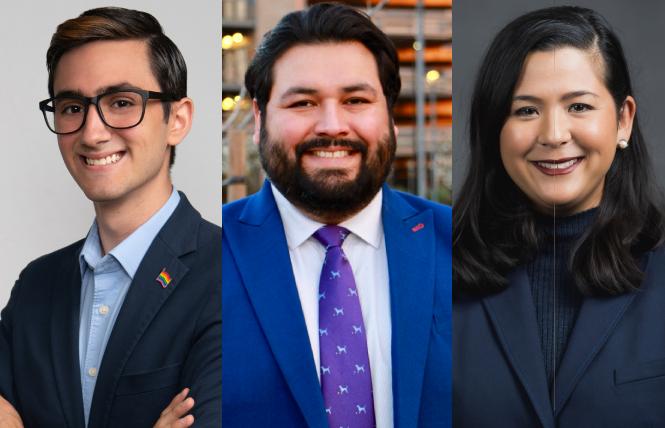 James Aguilar, left, Victor Aguilar Jr., and Malia Vella are three of the candidates in the AD 18 race. Photos: Courtesy the candidate

LGBTQ priorities
The five candidates all responded to the questionnaire the B.A.R. sent to the contenders in the race. In particular, they were asked to detail what their LGBTQ legislative priorities would be should they be elected.

Bonta, pointing to her addressing LGBTQ issues with her local public schools as a school board member, said she would carry forward that work to the state level and be a "vocal supporter" of funding for health and support services targeted to LGBTQ youth.

"LGBTQ youth experience bullying, rejection, isolation, and report much higher rates of depression, anxiety, and suicide," noted Bonta. "I will work to make sure that the nearly 50% of the state budget that goes towards education will be used to ensure that our schools are recognized as the essential hubs of support for children."

Ramachandran told the B.A.R. that her LGBTQ legislative priorities would include addressing domestic violence in the community, an issue she focused on while in law school and during her post-college employment with a network of community health clinics as a home visiting case manager.

"I believe that violence against LGBTQ individuals must be recognized as a public health crisis in California, and given far greater attention and resources on a state-wide basis," contended Ramachandran.

She also would call for greater services to address California's houseless LGBTQ population and any discrimination the community faces in the housing and rental industry. Strengthening workplace protections for LGBTQ individuals, especially people of color and transgender individuals, and programs to address food insecurity in the community, which the COVID pandemic brought to the fore, especially among youth and seniors, would also be priorities of hers.

"I would plan to support legislation on many intersectional issues that impact members of the LGBTQ+ community including nondiscrimination in the workplace and education, transgender and intersex rights, single payer healthcare and HIV/AIDS programs, criminal justice reform, immigration reform, and more," pledged Ramachandran.

Also pointing to the work he has been doing as an elected school board member in San Leandro, James Aguilar said education issues would be front and center for him if he were to serve in the Assembly. At the top of the list is providing professional development on LGBTQ+ issues to the state's educators, he said, fostering better connections between schools and community groups, and heightened mental health services for students.

"We are the fifth largest economy in the world yet the 41st in the nation for per-pupil spending, alongside our underfunded public colleges and universities," he noted.

Tackling the state's housing crisis would also be among his main priorities, said Aguilar, with homelessness spiking in the district in recent years and home prices escalating during the pandemic. Correlated to the issue for Aguilar is building more transit-oriented housing while also improving the state's public transportation systems.

"We need to do better, especially when national surveys show that our LGBTQ+ youth are 120% more likely to become homeless than straight individuals," he said. "We need to create more supportive services, enact strong and bold tenant protections, and deliver affordable transit-oriented housing."

He also zeroed in on the housing crisis as one of his main issues he wants to address in the Legislature. Among the proposals he supports is ending exclusionary and racist zoning policies that prioritize single-family homes over multi-unit buildings, repealing the state's Costa-Hawkins law that impedes cities' ability to strengthen eviction protections for renters, and creating a rent forgiveness program for those residents and businesses unable to pay.

"We need safe and affordable housing for all — including strong statewide protections for renters and permanent housing for persons experiencing homelessness," he wrote. "Housing is a human right. East Bay and all California residents should not have to fight for their homes."

Vella, a professor at Mills College, pointed to education issues and health care concerns as the main LGBTQ initiatives she would pursue. In particular she said she supports the bill Assemblyman David Chiu (D-San Francisco) is carrying this legislative session to ensure the state's public colleges and universities don't deadname transgender, nonbinary and other students on their academic records.

And without referring to the University of California by name, Vella sided with LGBTQ advocates and lawmakers who want to ensure the state's university system is not limiting the health care services it is providing via the contracts it has with faith-based medical centers. Gay state Senator Scott Wiener (D-San Francisco) ended up tabling his bill addressing the issue until next year's legislative session due to a lack of support, while LGBTQ advocates and others took their demands directly to the UC Board of Regents at its meeting Wednesday.

"I support pro-equality legislation, including affirming records including marriage licenses and college records so that transgender and nonbinary people are not deadnamed, ensuring health systems and healthcare facilities provide a full range of service including reproductive and gender-affirming care, ensuring we adequately fund in-school support for our LGBTQ students, and that we move to a universal healthcare system," Vella told the B.A.R.

Whoever ends up serving out Bonta's term through December of 2022 will need to seek a full two-year term in next year's election, first by surviving the June primary then the November general election.