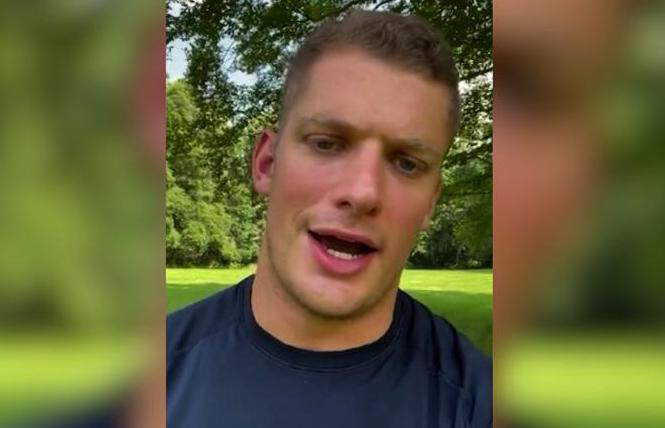 It was a like bolt of lightning to mark the beginning of Pride week: a professional football defensive end came out as gay while still an active player, a first. For years there had been rumors of professional football players who were going to come out, as our sportswriter Roger Brigham noted, yet none ever did until Carl Nassib, 28, who plays for the Las Vegas Raiders, made his announcement June 21 on his Instagram page.

Talk about refreshing: there was no media rollout, no huddling with GLAAD, and, especially, no immediate effort to monetize his news, like reality TV star Colton Underwood did when he tied his April "I'm gay" announcement to a Netflix special, complete with his friend, gay Olympian Gus Kenworthy, at his side. No, Nassib did it his way with a simple video in the backyard of his West Chester, Pennsylvania home. He began his written post with "Hi everyone, happy Pride Month." He noted that he had agonized over his decision for 15 years, which is more than half of his life. What's also different about Nassib's statement, which accompanied his video, was that he acknowledged that he doesn't know "all the history behind our courageous LGBTQ community, but I am eager to learn and help continue the fight for equality and acceptance." There are many LGBTQ community leaders who can help him learn about our history when he is ready; and he'll have the support of out LGBTQ athletes as role models.

Nassib is already giving back by announcing that he's partnered with the Trevor Project, a Los Angeles-based nonprofit that provides suicide prevention services to LGBTQ youth. As he noted, young queer kids are five times more likely than their straight friends to consider suicide. "For someone like me, who has been so lucky and cherishes every day, it brings me incredible sadness to think that our LGBTQ youth are at such a elevated risk for suicide," he wrote. "Studies have shown that all it takes is one accepting adult to decrease the risk of an LGBTQ kid attempting suicide by 40%. Whether you're a friend, a parent, a coach, or a teammate, you can be that person." To that end, Nassib said that he is making a $100,000 donation to the Trevor Project, a gift that will save lives.

Nassib was also realistic and humble in his message. "Lastly, I hope everyone can understand that I am just one person," he wrote. "I am a lanky walk-on who is living his dream." He added that he has a small window in which to play professionally, and asked the media to give him some space.

But we look forward to seeing lots of video messages like Nassib's. He is the first — but certainly should not be the last — gay man in professional sports to come out while still an active player. Famously, several pro players came out of the closet in their retirement, starting with David Kopay in 1975, who played for the San Francisco 49ers. Yet, homophobia remains so ingrained in culture that it's easy to succumb to the belief that full acceptance of and equality for LGBTQ people will mean that we will no longer need to talk about our coming out and lived experiences — we should never be silent about this. In his video, Nassib says that "representation and visibility are so important," yet subtly undermined his comments a second later when he said, "I actually hope that one day videos like these and the whole coming out process are just not necessary."

Actually, we want to live in a world where we talk about being LGBTQ — and celebrate people's coming out journeys. That's one of the reasons why we ask people in interviews whether they identify as LGBTQ (to the consternation of some readers, who would rather we not) so that people, young and old alike, know they are reading about out LGBTQ people. San Francisco Supervisor Harvey Milk didn't lose his life to spare people from coming out of the closet. We don't elect out LGBTQ political leaders because we want them to de-emphasize their identity and act like straight folks. It's exactly the opposite. Milk wanted to throw open every closet door. He wanted out politicians to be victorious so our issues would be front and center. While we appreciate and support our straight allies, it's just not the same thing as seeing ourselves represented in society, whether they be out entrepreneurs, parents, celebrities, physicians, nurses, teachers, workers, artists, or like this week, professional athletes.

Nassib came out in a classy way, yet by coming close to undercutting his message, risked diminishing the very powerful example he sets, particularly for budding athletes. He admittedly has more to learn and unlearn, as we all do. But the goal can never be a world in which we don't talk about our identities and lives. This Pride Month — and every month — be proud of who you are and say it out loud. LGBTQ visibility is power.