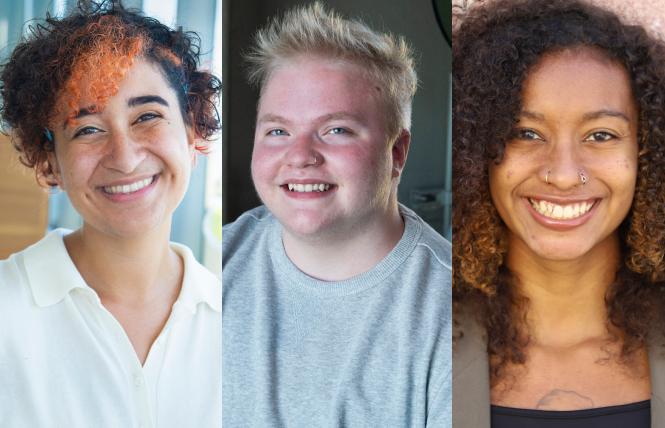 Exploratorium STARS interns, from left, include Lavender de Julia, Felix Duley, and Kayla Walker, learned a lot during their time with the museum. Photos: Courtesy Exploratorium

One project examined how the STEM fields of science, technology, engineering, and mathematics tie into gender and gender expression. Another involved interviewing out LGBTQ+ professionals working in science, science education, and science advocacy.

Curriculums used to educate museum employees about transgender acceptance received an update. And how docents at science museums use gender-specific terms when talking about the natural world was examined to see how they could incorporate more inclusive language.

Those are just a few examples that the first-ever class of 13 STARS interns aged 18 to 24 at the Exploratorium along San Francisco's Embarcadero worked on over the last six months. The acronym stands for Striving for Trans-inclusion and Anti-Racism in Science learning.

The program aimed to center trans and queer people of color, their perspectives, and identities during the internship, which came to a close during Pride Month. The goal was to transform the way gender inclusion and racial equality are linked to science learning, and the interns' projects have been featured during the Exploratorium's special "After Dark Online" Pride Month events, the last of which will take place for free at 7 p.m. June 24.

"We are working together to collaborate on and create something so wonderful, that was extremely special," said Lavender de Julia, 23, a queer femme nonbinary graduate of CSU-Northridge, where they earned a B.A. in deaf education and a minor in art history. "I will take that with me and, wherever I go next, make sure I am working in a team."

Sal Bell Alper, 34, manager of the Field Trip Explainer Program at the Exploratorium, served as the STARS program manager. A queer and transgender nonbinary Oakland resident, they pitched the 20-hour-a-week internship, which paid participants $19 an hour plus some benefits, as a way to help young adults find work in the museum field at a time when most institutions were forced closed due to the COVID-19 pandemic. The application noted people with an arts background were welcome to also apply and used the acronym STEAM.

"As far as I know this is the only program of this exact style a museum is doing, science-based education work around trans inclusion, queer inclusion, and anti-racism," said Alper. "To me, why it matters is that science education is a gateway into formal science as well as science literacy and understanding the world. During the pandemic we've seen the importance of being able to understand the science behind things."

Alper added that, "Without that base understanding, we have a lot of inequities. In order to support STEM, it is important there is science literacy and understanding in our queer communities."

Diversifying ranks
Diversifying the ranks of STEM professionals brings added bonuses, explained Alper, in how people think about the sciences and the solutions they are able to achieve.

"Having more diverse thoughts and experiences creates better outcomes," said Alper, who is unsure if there will be a second cohort of STARS interns.

Solano Community College student Felix Duley, 18, a bisexual transgender man who lives in Fairfield, came to the internship through his love of spiders. (He has 12 tarantulas and one jumping spider at home.) A friend he met while working at the Solano Pride Center suggested he apply, as they knew Duley wanted to turn his love of arachnids into a career.

"The merger of sociology and life sciences and being able to promote anti-racist practices and trans-inclusion, it is everything I am working toward," said Duley. "Coming from working at the Pride center to exploring life sciences, it is just fascinating to me how those two things can exist in the same realm for me. For a long time I felt like it was one or the other. To find a job that merges those two passions is worth its weight in gold for me."

He only recently was able to visit the Exploratorium in person for the first time. The institution moved into its bayside location at Piers 15 and 17 in 2013, having relocated from its longtime home at the Palace of Fine Arts in the Marina.

"It is massive. I am blown away," said Duley. "It is so sad that things aren't populated by people. I can't imagine how different it is to be here with a bunch of folks looking to explore."

Prior to the internship Duley said he was a bit "freaked out" about entering the STEM field as a male-identified transgender individual. Now he hopes to find a teaching position to serve as a role model for other trans young adults.

"To have a program like this I can come to as a trans male and not just as a male and be totally fine and not have to exclude key aspects of myself makes it palatable to pursue my dreams," said Duley. "I learned a lot still needs to be done, but we are making headwinds every single day. Just the fact a cohort like this existed ever is massive in my mind."

The interns' work has not only had an impact at the Exploratorium, which has offered online programs during the COVID pandemic and plans to reopen to the public July 1, but also at other science institutions that can take advantage of the programs, curriculum, and educational materials they produced. The recorded conversations they did with out scientists are part of a visibility campaign called "500 Queer Scientists."

Lauren Esposito, Ph.D., curator of arachnology at the California Academy of Sciences in San Francisco's Golden Gate Park, founded the campaign and is working on a pop-up exhibit "if/then" that will debut at her institution next week. There is a digital companion piece already online and the exhibit materials can be replicated by other museums.

"People with LGBTQ+ identities have propelled science forward from the shadows, and they've persisted in the face of persecution — scientific and otherwise — for centuries. It's long past time for us to be seen for our accomplishments, and embraced for our identities," stated Esposito in February after the Association of Science and Technology Centers awarded the Cal Academy an IF/THEN Gender Equity Grant and also a Moonshot Award.

Intern Kayla Walker, 22, a queer woman with Black and Mexican roots living in Santa Ana, helped worked on the "if/then" exhibit. Her STARS team developed a webinar that teaches museum professionals how to engage with the exhibit.

"With this exhibit the museum is doing a beautiful job really emphasizing anti-racism and trans-inclusion," she said. 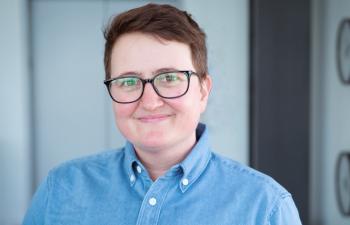 A senior at UC Berkeley majoring in English literature, Walker had started an online virtual dance studio to teach students from around the world her love of ballet and hip-hop dance. She applied for the STARS internship due to having a "huge passion," she said, for seeing a merging of the humanities with STEM, particularly around computer science.

"I had a great experience. I think I learned a lot about myself and the world around me," said Walker. "I think most importantly I got to connect with people who have completely different experiences than me."

Growing up in the East Bay with her deaf mother, de Julia now lives in Los Angeles and consults with cultural institutions on how they can provide better disability access to their visitors. Last year de Julia, whose father is Mexican and mother is Cape Verdean, founded the group Pro Bono ASL with other queer people of color sign language interpreters to provide culturally accurate American Sign Language services to the Black, indigenous, and people of color deaf community across the U.S. and Canada.

With cultural institutions shuttered last March due to the COVID pandemic, de Julia found themself without work. When they discovered the call for applicants for the STARS internship, de Julia at first thought it was fake. But after doing some research, de Julia realized it would be an amazing opportunity to further the work they had been doing.

"Disability access work is so new, unfortunately, to a lot of institutions," said de Julia. "Trying to find a position at a museum and cultural institution that felt really aligned with what I do was hard."

One of the first projects they worked on was special programming for an "After Dark" virtual event celebrating the Transgender Day of Visibility and that centered STEM in the lives of transgender people.

A particularly special assignment for de Julia was interviewing fellow disabled queer Latina Dana Bolles, a NASA engineer who is a quadriplegic and lives in San Francisco, for the "if/then" exhibit. Through the work they did for the internship, de Julia hopes they have shined a light on how the sciences need to move beyond a binary view of gender.

"I understand there are a lot of programs to get women into STEM. It begs the question who identifies as woman and what is woman?" said de Julia. "I hope the Exploratorium can be a catalyst for using queer as an umbrella term instead of just one gender specific group."

To learn more about the 500 Queer Scientists campaign, visit https://500queerscientists.com/

For information about the Exploratorium, its online events, and to purchase tickets for when it reopens, visit https://www.exploratorium.edu/

And for more on its upcoming "After Dark Online: Pride" event June 24, visit https://www.exploratorium.edu/visit/calendar/after-dark-online-pride 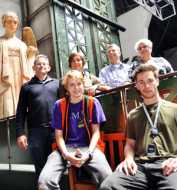 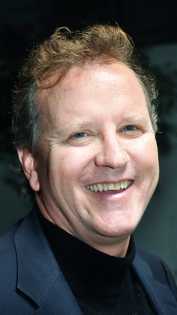